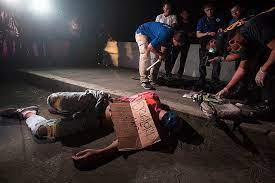 MANILA, Philippines—The direct role of the Philippine government in civilian-targeting in its bloody campaign against drugs has escalated since 2020, and the bloodshed has no signs of subsiding, according to a US data analysis group.

“The Philippine state has taken an increasingly large role in targeting civilians itself, no longer trying to create distance by ‘outsourcing’ the majority of violence to vigilantes,” said the report by Armed Conflict Location and Event Data Project (ACLED), a US-registered nonprofit organization that analyzes information and data on conflicts and violence worldwide.

“Since 2020, there has been an upward trend in the proportion of state involvement in drug war violence,” ACLED said in the report devoted to the ongoing campaign against drugs by Philippine President Rodrigo Duterte.

After studying and analyzing data and information from at least 40 sources, ACLED said it also found that the drug war’s toll on civilians in the Philippines had been underreported.

“Our new data clearly indicate that the government is severely undercounting the drug war’s toll on civilians in the Philippines,” said Dr. Roudabesh Kishi, ACLED director of research and innovation, in an e-mail exchange with INQUIRER.net.

The ACLED report found at least 1,100 fatalities in the anti-drug campaign that the government has not counted. “We now estimate at least 7,742 civilians have been killed in the drug war since 2016,” the report said.

It said analysis of the data showed that the actual civilian death toll in the campaign against drugs was 25 percent higher than the government’s count “even by a conservative estimate.”

“The government admits that over 6,000 killings have occurred during police operations in association with the drug war,” said ACLED.

“These figures exclude ‘vigilante’ killings by non-state actors, however, which played a significant role, especially in the early days of the drug war, in targeting civilians,” ACLED said in its report.

“There are clear ties between anti-drug vigilantes and the state,” said the report. “At minimum, such actors are supporters of Duterte and his drug policies, carrying out attacks inspired by Duterte’s rhetoric.”

“In other cases, the ties between these agents and the state have been more direct, with perpetrators relying on police to secure the perimeter in the lead-up to attacks,” ACLED said.

While the government keeps a death toll, it has done little to hold police officers accountable for killing civilians. “Many officers have already been absolved of any wrongdoing during internal police investigations,” ACLED added.

An e-mail seeking Malacañang reaction sent by INQUIRER.net to the office of Palace spokesperson Secretary Karlo Nograles, who took the place of resigned spokesperson Harry Roque, was acknowledged as received but contained no reply to the ACLED findings.

According to ACLED, its data analyses and research reports are among the key documents being examined by the International Criminal Court in the case filed against Philippine officials in connection with alleged unlawful killings during the campaign against drugs.

“Alongside a range of other key sources, ACLED data and analysis were cited extensively by the ICC in its request for an investigation into potential crimes against humanity during anti-drug operations in the country earlier this year,” said Kishi, referring to the International Criminal Court.

“First, while the overall rate of violence has declined since the height of the drug war in 2016, deadly attacks have continued throughout 2021, with hundreds of civilian fatalities,” said the report.

“Second, state forces, especially [the] police, have taken an even larger role in violence targeting civilians over the course of the drug war,” it said.

The report noted that, although anti-drug vigilantes were largely responsible for a great deal of violence against civilians during the initial months of the war on drugs, “majority of civilian targeting in recent years has been carried out directly by state forces.”

“The shift appears to be driven by increased scrutiny on vigilantes by the media and the international community, including the ICC,” said ACLED.

Direct targeting of civilians by state forces was partly a result of other fronts in armed conflict against terrorists and communists, according to ACLED.

In the war on drugs, the national police leadership continued to play a leading role, according to the report.

“The official police chain of command allows the government to continue prosecuting the war on drugs while retaining greater oversight of the actors involved—especially against the backdrop of an ICC investigation,” ACLED said.

This was in contrast with the employment of “loosely organized vigilante groups that may prove more unpredictable and difficult to control,” it said.

About a month before he retired as Philippine National Police (PNP) chief, Guillermo Eleazar said he respected the decision of relatives of civilians killed in the war on drugs to file a complaint at ICC.

But he said ICC involvement may not be necessary as “the Philippine justice system works.”

“Proof of this is the conviction of the policemen for the killing of Kian Delos Santos and several other court decisions which have caused the dismissal and imprisonment of other PNP personnel,” Eleazar said in September, more than a month before he left the police force and decided to run for senator under the Lacson-Sotto ticket.

According to ACLED, the third key development in Duterte’s war on drugs was the shift in the geography of the violence.

ACLED said the highest concentration of violence and killings has shifted from the National Capital Region, the country’s economic hub, to Central Luzon, particularly Nueva Ecija, which “is now home to the most drug-war related violence in the country.”

Nueva Ecija, ACLED said, surpassed Bulacan and Metro Manila in cases of violence and civilian deaths related to the anti-drug campaign “to become the new epicenter of the war.”

“While the reasons for this shift to Nueva Ecija are not yet clear, the broader shift to Central Luzon appears at least in part linked to the transfer of top police officials from the National Capital Region,” ACLED said.

“These officials have continued to be rewarded and incentivized by the Duterte administration even as violence has surged under their command,” it said.

Duterte has repeatedly defended his campaign against drugs, claiming that those protesting what they perceive as human rights violations are unwilling to see how drug abuse is harming the Philippines.

A complaint has been filed at the International Criminal Court (ICC) accusing Duterte and his officials of crimes against humanity in carrying out the campaign against drugs.

The ICC has agreed to investigate but also suspended action upon the request of the Philippine government.

Nograles said while the government reached out to ICC to suspend action, it was “not waiving its position regarding ICC’s lack of jurisdiction.”

“We trust that the matter will be resolved in favor of the exoneration of our government and the recognition of the vibrancy of our justice system,” Nograles said.

Philippine officials point to an ongoing investigation by the Department of Justice (DOJ) as proof there was no impunity, which would justify an investigation by ICC or the United Nations High Commissioner on Human Rights (UNHCHR).

Although the DOJ had completed a review of 52 civilian killings during police anti-drug operations and concluded that 154 police officers could be held liable, ACLED said its analysis found that civilian killings attributable to the state and its agents were “much higher than the official figures suggest.”

“This marks a rare admission by the Philippine state that it may be complicit in abuses stemming from the war on drugs—which continues to rage on,” said ACLED.

The data analysis group said confusion over thousands of other deaths that could be related to the campaign against drugs is preventing a closer look at those killings and was partly caused by the use by police of the term “death under investigation” or DUI.

The complaint filed at ICC cites up to 30,000 killings in the Philippines’ war on drugs, many of which had been tagged as DUI and could not be immediately listed as killings directly related to Duterte’s anti-drug campaign.

However, the lack of transparency by the Philippine government is blocking independent investigations into the campaign against drugs, said ACLED.

“Independent monitoring and data collection [are] critical to ensure that investigative bodies like the ICC have reliable information to support their work and hold perpetrators of abuses accountable,” it said.