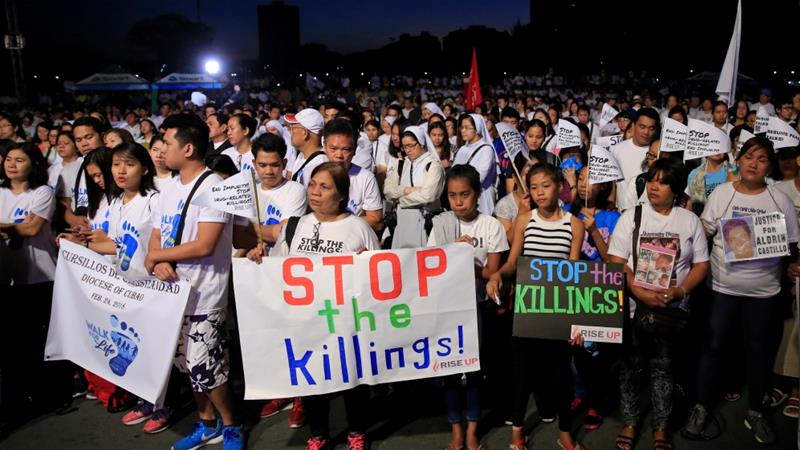 The Commission on Human Rights (CHR) last week released a damning report saying that the Duterte administration has “failed in its obligations to protect human rights,” and has “encouraged a culture of impunity” through its brutal war on drugs.

After examining 882 drug-related cases from 2016 to 2021, the CHR said the police used “excessive and disproportionate force” with “indicated intent to kill,” contrary to its claim of self-defense and of suspects resisting arrest (nanlaban). Many of the suspects were shot in the head or torso, or had suffered multiple gunshots, indicating “possible violations of [their] rights and lapses in the observance of protocols established by law,’’ the report said.

The CHR said survivors found it difficult to seek justice because the police and other government agencies refused to cooperate with independent probers. It noted that the police often cited President Duterte’s 2017 directive to the Philippine National Police (PNP) and the military “not to participate in any investigation into alleged human rights violations committed by its agents without his clearance.”

The findings of the commission echo the June 2020 report of the United Nations Human Rights Office, which found widespread human rights violations and “persistent impunity” in the drug war. The report was mandated by the United Nations Human Rights Council amid outrage over the mounting death toll in police drug operations. Taken together, these reports bolster the charge of crimes against humanity that Mr. Duterte is facing at the International Criminal Court (ICC) in The Hague, The Netherlands.

But the fate of the CHR’s 48-page report is now unclear, coming as it does in the last few weeks of the Duterte administration and the looming presidency of the son of the late dictator Ferdinand Marcos Sr., whose authoritarian regime was marked by atrocities and rights violations.

What’s more concerning is that the CHR is without any commissioner right now, after the terms of its chair and four commissioners lapsed on May 5. CHR executive director Jacqueline de Guia was left to oversee the agency’s operations until its new commissioners are appointed.

The important task of constituting the CHR, as well as appointing new officials to hundreds of government vacancies, will fall on presumptive president Ferdinand Marcos Jr. as soon as he assumes his post at noon on June 30.

And while the new administration is expected to put high priority on fixing the pandemic-battered economy, the appointments to key agencies and commissions, such as the CHR, will undoubtedly be keenly watched for the signals that these assignments would convey.

For the most part of his six-year administration, Mr. Duterte had sidelined the CHR in his campaign to muzzle dissenting voices and vilify rights defenders and critics of his iron-fist approach to illegal drugs.

It would certainly be in the best interest of the nation for the new administration to take a different approach and allow an independent CHR to fulfill its constitutional mandate to protect human rights. As well, the new administration must revisit the Duterte drug war and cast a critical eye on its brutal aftermath on the lives of its mostly poor victims.

The CHR report’s recommendations could provide a template for the PNP and other government agencies interested in removing the stain of state-sanctioned impunity that has cost the lives of thousands and tarnished the country’s image abroad.

Implementing these reforms would also help the government press its case against the impending ICC investigation by showing that it has taken sufficient steps to stop human rights violations by state agents.

Addressing the drug war and strengthening the CHR would be crucial in boosting the international community’s confidence in the new government that would, in turn, allow for better trade relations and more investments. Not a few foreign loans or grants are tied to the government’s observance and protection of rights found in several international statutes to which the Philippines is a signatory. Last February, for instance, the European Union Parliament urged the EU to withdraw the Philippines’ GSP+ privileges — which could affect Philippine exports to the EU — if it failed to comply with the conditions on human rights, among others. At the moment, most countries are on a wait-and-see stance, observing how the new dispensation would deal with state violations of the rights and freedoms restored in 1986.

It is vital that the CHR is immediately constituted, and with commissioners who have the competence, independence, and fealty to uphold the civil, political, and human rights guaranteed to every citizen by the Constitution.

For the new administration to turn its back on this golden opportunity to gift the country with a credible CHR would be a costly mistake, and a disrespect to its overwhelming mandate to unite the country.