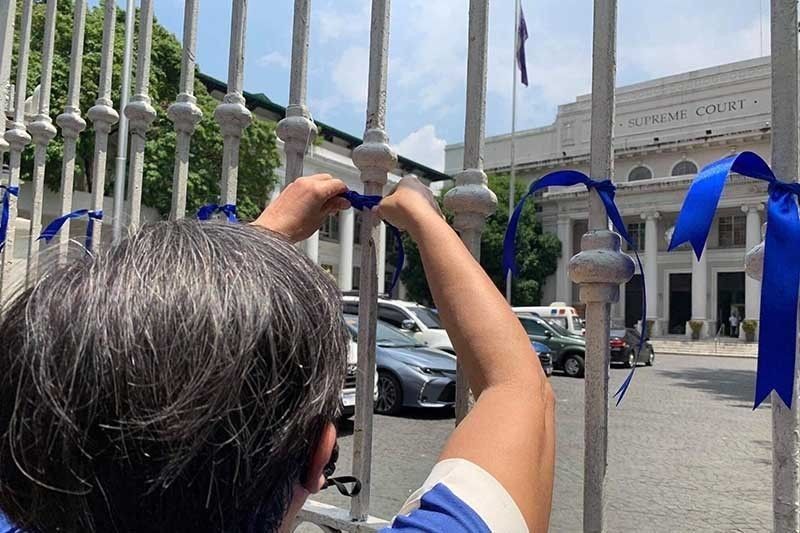 MANILA, Philippines — More than 100 lawyers on Monday wrote to the Supreme Court to propose amendments to rules on the issuance and service of search warrants in response to the killing of nine activists in bloody raids this month.

Led by National Union of Peoples’ Lawyers Neri Colmenares and Edre Olalia, 139 counsels asked the high court to “take immediate, concrete and responsive action” amid the killings and arrests of activists during implementation of search warrants issued by Metro Manila judges.

The lawyers said this has not only resulted in killings and arrests of people, but “also impacted on the public’s confidence in the integrity, prudence, and independence of judges.”

This is the latest push by lawyers to look into what they say is the “weaponization” of the rules of court, specifically in the search warrants that have led to the arrest of dozens of activists and the killings of others.

Simultaneous raids in the Calabarzon region on March 7 left nine activists, whom  police have said were communist rebels, dead.

The lawyers said they propose a review of the procedure in the issuance of search warrants “towards ensuring that these are not issued perfunctorily but only after rigorous scrutiny by the courts, in accordance with constitutional standards and procedural safeguards, and bearing in mind the deteriorating human rights situation in the country.”

The lawyers proposed a review — with the participation of the Integrated Bar of the Philippines, other lawyers’ groups, and relevant civil society organizations — of A.M. No. 03-8-02-SC which allows Manila and Quezon City judges to issue warrants that can be implemented anywhere in the country.

Applicants for cases under the memorandum should also be limited to filing before the nearest court outside the subject area, but within the judicial region of that place, the lawyers said.

They also suggested that applications for search warrants filed with courts be raffled and distributed to other judges, which should also allow them to conduct thorough hearings before granting the orders.

“These proposed reforms will help ensure that the police cannot indulge in ‘forum shopping’ or choose their ‘favorite’ judges in filing search warrant applications,” they added.

Progressive groups have long called for a review of search warrants issued by Quezon City Judge Cecilyn Burgos-Villavert, which led to arrests of Bacolod and Manila activists in 2019 and of the “Human Rights Day 7” in December 2020.

The lawyers urged the SC to prohibit the “wholesale applications for search warrants and their consideration by a single judge.” Should there be multiple applicants, these must be distributed to other courts within the judicial region, they said.

Warrant served only during office hours

The lawyers also proposed that search warrants be served only during office hours, to avoid possible abuse by law enforcers and allow the subjects to call their lawyers. Should the operation be done beyond office hours or middle of night, the applicant must detail in the Return of the warrant the compelling reasons to do so, they said.

Police officials have stressed that warrants can be served at any time, and that serving them before dawn gives the raiding team the element of surprise.

Law enforcers must also document their operations, using body cameras or video-recording devices, and there should also be an express prohibition on restraint or relocation of the subject of warrant when search is being conducted, they added.

Before a case is submitted for resolution during inquest, the prosecutor must require law enforcers to submit the transcript of stenographic notes during the application hearings. The prosecutor must also be able to talk to the respondent to ascertain counter-allegations, they added.

In case of death during the service of warrant, the lawyers said this should be referred to immediate and automatic review of the implementation of warrant, and relevant documents must also be submitted to the Supreme Court.

The lawyers made a fresh plea to the SC: “The number of deaths resulting from the execution of search warrants has grown to an alarming level.”

“We ask the Court to initiate reforms to help ensure that judicial processes are not abused to violate the constitutional rights to life, liberty, security and property of all Filipinos and particularly based on recent events, activists and dissenters,” they added.

Chief Justice Diosdado Peralta said concerns on the issuance of search warrants, as well lawyers’ security concerns, will be on agenda on the en banc session on Tuesday.