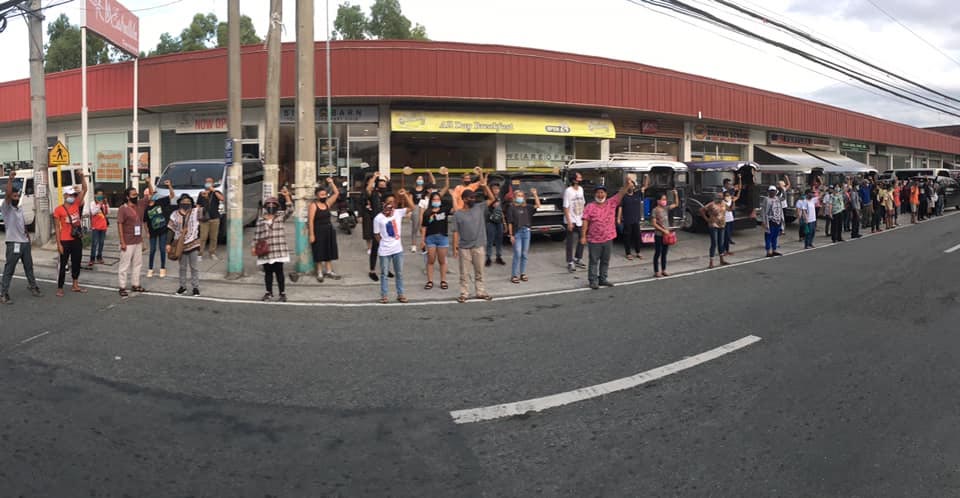 SANTA ROSA, Laguna – Almost 150 protesters from various organizations and sectors nationwide were accosted by elements of the Philippine National Police on their way, during, or after protest actions coinciding with President Duterte’s fifth State of the Nation Address, July 27.

In Metro Manila, 34 individuals were arrested while on their way to join the SONAgkaisa protest in the University of the Philippines Diliman. The police cited quarantine violations as the main reason.

Five members of transport group Piston were arrested at the Quezon City Memorial Circle after they raised their placards. Five more individuals were arrested in Caloocan while inside a jeepney. In both cases, authorities stated that they violated rules concerning the use of traditional jeepneys. The Piston members were released after five hours.

Twenty-four individuals were also arrested in Marikina City, also on their way to UP Diliman, ostensibly for violating physical distancing protocols.

Police also seized placards and streamers from two protesters in Quiapo Church during Mass. The materials were inside the churchgoers’ bags and were not in display.

Outside Metro Manila, police accosted a total of 107 individuals from Cavite, Bulacan, Laguna, and Tuguegarao City either before or during decentralized SONA protests.

A total of 85 activists from youth, peasant, LGBT, and fisherfolk organizations in Southern Tagalog were harassed and accosted by the police on their way to the #KilosKatagalugan protest in the University of the Philippines Los Baños.

Sixty-two members of Bayan Cavite, Katipunan ng mga Samahan ng Magbubukid sa Timog Katagalugan, and Anakbayan Cavite were held at a checkpoint in Brgy. Maduya, Carmona, Cavite on their way to UPLB and were detained for over three hours after they were told that they needed a travel pass.

Twenty-three other activists were held in two separate incidents at a checkpoint near Camp Macario Sakay, Los Baños, Laguna.

A jeep with seven individuals from Anakbayan Laguna and Kabataan Partylist Laguna was first lagged down at the checkpoint after police learned that the group was going to the SONA protest in UPLB. Officers then asked for identification and travel passes before commandeering the jeep and forcing the driver to bring it to the Los Baños Municipal Police Station.

The seven were held at the station for an hour before they were escorted back outside of Los Baños.

According to Red Clado, spokesperson for Anakbayan Laguna, “It was clear that the only reason they harassed the passengers was because they were trying to prevent from them attending the SONA ng Bayan and exercising their rights.”

“The other vehicles forming the caravan were let go without any issue, so why only the one who said they were going to the SONA?” he asked.

Sixteen activists from Queer Quezon, Anakbayan Quezon, Pagkakaisa ng mga Magsasaka sa Ikalawang Distrito ng Quezon, and independent media outlet Quezon Reels were also held at the same checkpoint. They were held for over an hour near the checkpoint and were asked to choose to either be “detained or go home.”

“This was a clear violation of our rights as citizens who wish to manifest our dissent against a government that abuses its people,” said Neal Roxas, spokesperson for Queer Quezon in a video statement released after the incident.

Two cases of arrests occurred in Bulacan: in Pandi, five members of urban poor rights group Kadamay were arrested for conducting an online SONA protest, while 13 were arrested inSan Jose del Monte on their way to the UP Diliman protest.

According to Kadamay, the five arrested in Pandi have no formal charges against them, apart from an assertion from the police that no protests beyond 12 noon were permitted. Kadamay also labeled the bail needed to release Fortaleza as “extortion” meant to “bully organizations and communities into ceasing from airing their grievances.”

In Tuguegarao City, police swarmed a protest by members of youth organizations, arresting two for alleged quarantine violations. Their two paralegal counsels were also charged with violations, and were coerced into signing an arrest form and booking sheet as condition for their release.
The four were released after five hours of detention.

In Cebu, an online cultural performance organized by Kilusang Magbubukid ng Pilipinas was interrupted by police officers while being streamed live through Facebook. No arrests or detentions were made.

In almost all cases, police cited violations of existing quarantine protocol as the main reason they were arrested. Laguna and Metro Manila are currently under general community quarantine, while Tuguegarao is under modified GCQ.

However, the National Union of Peoples’ Lawyers stated that there is “no legal basis” in warrantless arrest for quarantine violators. NUPL also stated that individuals cannot be arrested for not having a quarantine pass, not wearing facemasks, not following social distancing protocols, or not following curfew guidelines.

The lawyers’ group also challenged the Department of Interior and Local Government’s assertion that mass gatherings were “prohibited,” stressing that the people have “the right to peaceably assemble and petition the government for a redress of grievances.”

As of press time, there is still no word on the 29 individuals arrested in Marikina and Caloocan. The 18 arrested in Bulacan are also still detained and waiting for charges to be filed.