27 years since Flor Contemplacion, OFWs still at risk of abuse and maltreatment 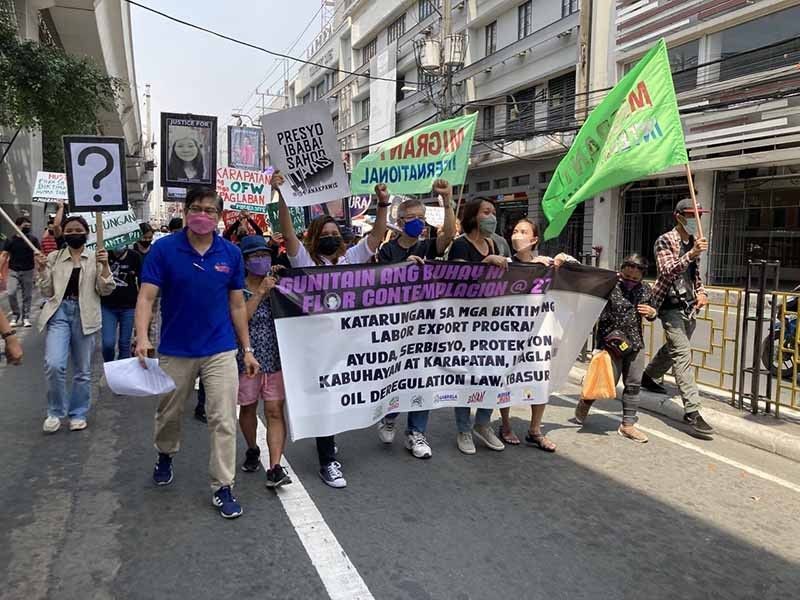 MANILA, Philippines — Nearly three decades after migrant worker Flor Contemplacion was executed in 1995, groups said overseas Filipino workers are still treated as commodities and do not get enough protection or assistance from the government.

Contemplacion, executed in Singapore on a murder conviction, drew attention to the plight of OFWs and groups who marked her death said the Migrant Workers Act was passed “as an attempt to appease the people’s widespread anger” over her death.

The law regulates overseas employment and penalizes illegal recruitment and also commits the state to deploying Filipinos “only in countries where the rights of Filipino migrant workers are protected” through existing labor laws and international agreements and conventions that protect migrant workers.

But, Migrante Philippines chair Arman Hernando said at a protest on Thursday, migrant workers face similar conditions to what Contemplacion did 27 years ago.

(They are still treated like slaves and face abuse and maltreatment while working. They face discrimination and low status while working abroad)

Migrante International chairperson Joanna Concepcion said that government policies continue to force many Filipinos to work abroad where, she said, they are neglected when seeking assistance from government.

They said the labor export policy that began in the 1970s has continued and “perpetuate(s) the systematic forced migration and separation of millions of Filipino families.”

The Philippines has created a Department of Migrant Workers meant to implement programs and policies to address the needs of OFWs and to make sure their rights are protected, but, even in debates in Congress, fears were raised that this would further institutionalize sending workers abroad for remittances that help boost the Philippine economy.

Enacted on Dec. 30, 2021, President Rodrigo Duterte said that with the signing of the law, “we honor not only the exceptional love of country of Dr. Jose Rizal, but also the patriotism, excellence, and courage of our modern-day heroes including overseas Filipinos.”

Cash sent home by Filipino migrants went up for the 11th straight month in January as the global economy continued to recover. Data from the Bangko Sentral ng Pilipinas showed remittances grew 2.5% to $2.668 billion in January this year from $2.603 billion in the same period last year.

Companies, such as those in the property sector, have seen positive or stable demand for products and services as demand was driven by the OFW market.

“With the historic oil price hikes and rise in the prices of basic goods in the past two weeks, the hardships that millions of Filipino families are already facing as a result of the pandemic will further intensify and cause conditions for Filipinos to leave the country en masse,” Migrante International said in a statement.

The groups called on government to help local industries develop and to give farmers their own land to till so Filipinos will have fewer reasons to seek better opportunities abroad.

Migrante International’s Concepcion said Filipino migrant workers do not get adequate protection and many are victims of human trafficking and of abuse in their destination countries.

Gabriela Philippines Secretary General Joms Salvador noted that there were 5,000 cases documented in 2020 of women migrant workers experiencing abuse abroad. She said that cases are likely underreported since victims may not feel confident that the government could do anything for them from so far away.

Protesters held several posters of overseas Filipino workers. Among the placards was a photo of Mary Jane Veloso, whose execution on a drug smuggling case has been stayed.

Migrante International earlier called on Duterte to help Veloso testify to put an end to victims of international drug recruiters and human traffickers.

Protesters also called for justice for Grace Santos, a domestic worker who died in the United Arab Emirates who died of abuse in 2021 and for Mary Jean Alberto — who mysteriously died by suicide in 2019 — and Joanna Demafelis, the OFW found dead inside a freezer in Kuwait in 2018.

There was a photo of Constancia Dayag, an overseas domestic worker in Kuwait who died in 2019 after various contusions and hematoma. Previous reports showed that there were indications Dayag was sexually abused before she died.

Jakatia Pawa, who was also a domestic worker in Kuwait, was executed in 2017, 10 years after she was accused of killing her employers’ daughter. Pawa had pleaded innocence and DNA evidence on the murder weapon used reportedly did not match hers.

(Twenty-seven years have passed, but, until now, there has yet to be justice for Flor, and, most of all, other Filipinos have also since died at the hands of foreigners [and they were there] because of their desperation to make a living.)

The group marched from Ever Gotesco Cinema along Recto Avenue in Manila but police with shields and yantok sticks blocked their approach to the Mendiola Bridge, which is a stone’s throw away from the presidential palace.