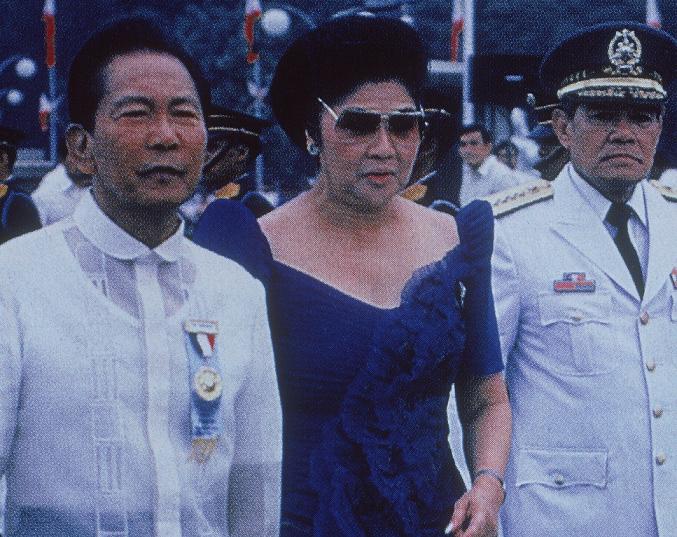 The Filam.net (A Magazine for Filipino Americans in New York)

When Wanna was forbidden, for safety reasons, from joining her third-grade classmates at a movie theater to watch “Bambi,” Gen. Ver’s soldiers fetched her a baby deer fromBaguio. Wanna was not allowed to join a school camping trip either, so the school camped in her garden, in two army tents set up by soldiers.

Wanna’s father was Marcos’ armed forces chief of staff and head of the National Intelligence and Security Authority (NISA). Though suspected and later acquitted of the assassination of the anti-Marcos politician Benigno “Ninoy” Aquino, he was in command of the armed forces during ‘martial law, when the military was involved in multiple human rights abuses, including torture and forced disappearances.

Gen. Ver, often tied up in the presidential palace, redeemed his absences with presents. Wanna loved Wonder Woman; so when Lynda Carter stopped in Manila, Wanna found herself in the star’s hotel room getting an autograph, arranged on her father’s orders.

Yet it was not a completely happy life. Dressedinfancy clothes, Wanna was chauffeured daily in a stretch limo from the gate of North Forbes Park to her school in South Forbes. Stopped in traffic while crossing McKinley Road, children her age knocked on her windows, begging for a few centavos. “It was a lot of luxury and a lot of feeling guilty of how much I had and how little everyone else had,” Wanna said.

Her yaya (nanny), Tarcella Cerbules, or “Nanay,” as Wanna’s family called her, helped the young girl develop a sense of empathy. Nanay was the only staff in Wanna’s home not from Ilocos Norte or Cagayan, the Marcos’ supporters base. “Nanay was from a poor province in Iloilo. She made me understand that many Filipinos didn’t have anything, and reminded me to not take my good fortune for granted.”

Fleeing after the fall

Wanna’s mother, banker Edna Camcam, was Gen. Ver’s long-time companion. After the 1986 “people power” uprising overthrew the Marcoses, Gen. Ver and his first family fled with them to Hawaii. Edna, Wanna and her sister escaped to Hong Kong, where they were separated, searched and questioned—a traumatic event for the eight-year-old.

Once reunited with her father, Wanna asked him why her family kept moving from one country to another. “Better you don’t know,” Gen. Ver replied, “The less you know, the safer you are.”

Wanna, now 44, grew up in exile in the U.S. and Europe. She was taught that the Philippines had needed heavy-handed martial rule to fight poverty and communism, and usher in a golden age. For a good part of her life, she believed that Marcos did many positive things for her country.

“People still say, my family included, that Marcos’ iron fist during batas militar saved us from communism. He built bridges, schools, our economy flourished, he put our country on the map”, she said. “After my father’s death, Mrs. Marcos told me that multiple PR firms were hired internationally to tarnish the Marcos name, so, when I saw anti-Marcos news, I wrote it off as foreign propaganda.”

In 1993, Wanna read “Waltzing with a Dictator,” a book on Marcos by the American investigative journalist Raymond Bonner. The book said that her mother was in fact her father’s mistress and she, an illegitimate child. Wanna, trained to be wary of such accounts and to view them as American propaganda, still wondered “If my family did lie about that, what else might be lies?”

The questions remained in Wanna’s mind but she was not yet ready to confront them. Over the next two decades, while Wanna tried to separate herself from politics, friends encouraged her to write her memoir.

In 2019, Wanna was preparing for the birth of her first child so she sought a doula to assist her delivery. She was assigned a Filipina, Michelle Söderman, an experienced doula from the Philippines who was newly licensed in Sweden. Wanna was her first client, and was unaware

Michelle was a “martial law baby.” Michelle said, “I know people who disappeared and never came back.”

As Wanna had grown accustomed to using her married name rather than her father’s, Michelle was unaware of her client’s family. But the day before Wanna’s due date, Michelle got an automated Facebook friend recommendation for a Wanna Ver. Michelle assumed Wanna was a distant relative of the Marcos general. What came to her mind, said Michelle, was “the image of Fabian Ver: the right hand of Satan or the devil, if not the devil himself.” She described feeling fear, anger and confusion. “If Wanna is connected to the devil, am I going to help her?”

Michelle decided not to let Wanna in on her discovery. She did her job. When the child was born, Michelle realized: “How would you connect a beautiful child to the doing of an evil person?”

Nonetheless, Michelle refused to accept payment, worried that Wanna’s money was tainted and part of the funds stolen by the Marcoses from the Filipino people. She told Wanna she had resolved to ask her first client in Sweden to donate to a nonprofit she supported in the Philippines. The pandemic came, and they lost touch.

In 2020, Wanna began writing her memoir, in an effort to reconcile her conflicting understanding, and to work out how she would eventually tell her family’s story to her child. Her research revealed opposing martial law narratives but it was viewing Lauren Greenfield’s documentary, “The Kingmaker” that had the most impact.

“Before watching it, the data on human rights violations were names on a page, numbers on a graph”, Wanna explained. “After seeing the interviews of [human rights victims] Hilda Narciso, Etta Rosales and May Rodriguez, they turned into real people to me. They had been harmed and continue to suffer from the abuses of my father’s regime. It was the human rights survivors that made me finally realize that the Marcos’ Golden Age history was a fabrication.”

“The Kingmaker” showed Ferdinand Marcos Jr. being asked whether he should apologize for the abuses of his father’s regime. His response: “What am I to say sorry about?”

Wanna thinks differently: “I feel like a million sorries is not enough,” she said. “I needed to learn the truth of what happened so I could tell a different story, to help those without a voice to tell their story… because of the role my father played in their suffering.”

This project is the result of an investigation by a team of journalists at the University of Gothenburg, Sweden. Wanna Ver is part of this collaboration as both a source and co-author for this article.