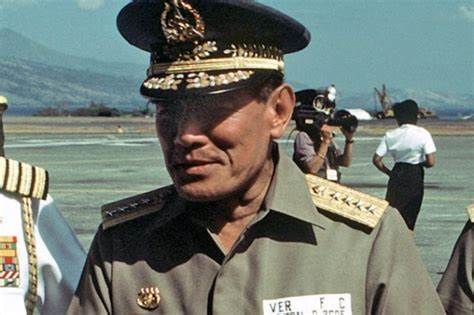 Wanna Ver, daughter of General Fabian Ver, is apologizing to victims of Martial Law for the crimes his father helped commit during his time in the Philippine military.

Wanna said this in a report the Philippine Center for Investigative Journalism released on Monday, May 2.

The entire report can be accessed and read on PCIJ’s website.

“In our culture we are taught to respect our elders, you know, utang ng loob, we are indebted to them. But I think it’s important to do our own research and to forge our own beliefs, look outside of what our family told us to believe,” Wanna said.

“We need to listen to each other and acknowledge wrongs done before our country and people can heal and move forward,” she added.

Wanna, daughter of the former general and banker Edna Camcam, shared these following the birth of her first child and while writing her memoir.

“When my daughter grows up, I want her to be able to know her history and lineage without avoiding it, like I did. The shame I’ve carried for years can be debilitating. Still, I’ve learned that with work, it can also be transformed into healing,” Wanna said.

Her father, Fabian, was the chief of staff of the Armed Forces of the Philippines under the administration of late dictator Ferdinand Marcos Sr.

He was also Marcos’ most trusted military officer during Martial Law when multiple human rights abuses and violations were being committed.

To atone for his victims, Fabian’s daughter helped establish an organization called Kapwa Pilipinas. It aims to promote empathy and reconciliation between the people involved during the dark regime and the victims.

The younger Ver also disagreed with the sentiments to just forgive and move forward.

“The majority of my family believes that people need to ‘forgive and bury the hatchet for the sake of our nation and the people. But I disagree,” Fabian said.

“I feel this view implies that the Golden Age story and the Never Again story are somehow equal when they are not. Most of the people who suffered under Martial Law, who suffered systemic oppression at the hands of the Marcos regime were student activists, farmers, informal settlers, the masa,” she added.

The report is a collaborative work between Wanna and her classmates at the University of Gothenburg in Sweden.

They reviewed documents and data related to human rights abuses during the Marcos regime.

Some online users were thankful for Wanna’s apology and acknowledgment of her father’s crimes.

Historian Kristoffer Pasion, meanwhile, was reminded of Jose Rizal’s words following the release of this article.

Impact of ‘The Kingmaker’

Wanna who grew up in exile in the US and in Europe, admitted that she was “trained” to view Marcos accounts as American propaganda for the most part of her life.

Even when she started reading books like “Waltzing with a Dictator” by American investigative journalist Raymond Bonner in 1993.

In this book, Wanna said she became aware that her mother was a mistress and she was an illegitimate child.

Lauren Greenfield’s documentary “The Kingmaker”, which was released in 2019, made a drastic change for her.

“Before watching it, the data on human rights violations were names on a page, numbers on a graph,” Wanna said.

“After seeing the interviews of [human rights victims] Hilda Narciso, Etta Rosales and May Rodriguez, they turned into real people to me. They had been harmed and continue to suffer from the abuses of my father’s regime. It was the human rights survivors that made me finally realize that the Marcos’ Golden Age history was a fabrication,” she added.

Meeting the victims themselves

Now at 44 years old, Wanna also had the courage to meet and reconcile with the victims themselves.

She started the journey with Michelle Söderman, her doula or professional labor assistant.

Then, she met Nolasco ‘“Noli” Buhay and writer Aida Fulleros Santos-Maranan, both of whom were tortured during Martial Law.

Wanna described these meetings as “cathartic” in nature.

“We all noticed the cathartic nature of our meeting. I know I am not at fault for my father’s actions, but I believe listening to survivor accounts and offering an apology on his behalf requires relatively little effort on my part, and could potentially alleviate substantial suffering for them,” she said.