A Revolutionary Journey: The 1971 PAL Hijacking to Mao’s China 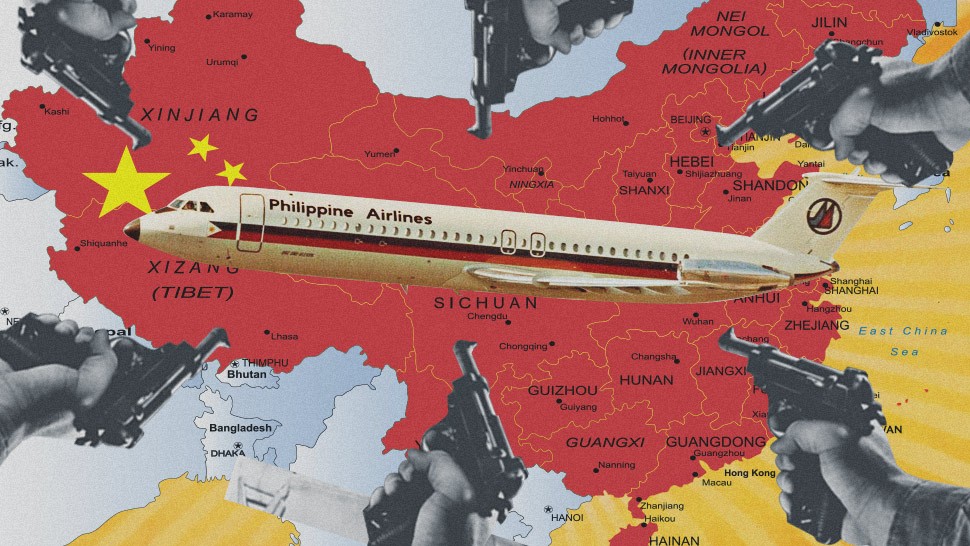 Fifty years ago, six students from Mindanao State University successfully hijacked a plane and brought it to China.

These days, it would be hard to believe that Fructuoso Chua, Jr. ever led an exciting life. A first glance shows nothing more than an old man living a quiet life with his dogs. But first glances are always treacherous, and behind Chua’s calloused hands are memories of a journey that sought to reveal revolutionary truths.

Fifty years ago, on March 30, 1971, six students from Mindanao State University successfully hijacked a plane and brought it to Maoist China—the first time such an event happened in the world. They stayed for a few years and experienced first-hand life under the Great Proletarian Cultural Revolution. Then they went home and were arrested.

Chua was one of the hijackers.

In Chua’s words, what led him to perform such an undertaking was his “search for revolutionary truths.” The year 1971 was a volatile time for the world, and the 28-year-old MSU student felt it in his bones. Three years before, Jose Maria Sison and 12 others reestablished the Communist Party of the Philippines under Maoist lines. The year after saw the establishment of the New People’s Army. The year after that saw the greatest wave of demonstrations that shook the nation at its core—the First Quarter Storm.

From the streets of Manila and the factories of Laguna to the haciendas of Negros and all the way to Marawi, students, farmers, workers, and everybody in between felt the call of national democracy. They raised their placards and unfurled their banners: “Down with imperialism, feudalism, and bureaucrat capitalism!”

The same waves existed in other countries. In Vietnam, the North Vietnamese were well on their way to revolutionary victory against decades of colonialism. In India, Charu Majumdar and the Naxalites were rapidly gaining strength in Calcutta and elsewhere. Not even the imperialist heartland was safe: In the United States, the Black Panther Party declared that “white capitalism” can only be stopped with “socialism.”

All these tremors pointed to one epicenter: China and Mao Zedong Thought. Socialist victory in 1949 and the subsequent Great Proletarian Cultural Revolution of the ’60s ignited thousands of fires all over the world. They were like candles dancing in the night.

All of these left Chua curious. He was determined to find out what Maoism was, what socialism meant, and what made it so alluring. He had been curious since high school, when he spent his idle time reading up on socialism in China and the USSR.

In college, Chua took up Political Science and found five people just as curious as he was: Glen Rosauro, Edgardo Tigulo, Domingo Baskiñas, Edgardo Mausisa, and Daniel Lobitaña. For them, reading theory just wasn’t enough. So they formulated a plan.

They would just have to go to China and see for themselves.

To be clear, going to Maoist China was not an impossible task. Foreigners were allowed to visit, and they often did. Students, intellectuals, journalists, and people from all walks of life would organize trips to China, see the Chinese countryside, and learn from proletarian experience.

It was Cold War politics that complicated matters. The Philippines, then a “staunch” U.S. ally, had no diplomatic ties to China. The United Nations at the time considered the Republic of China (Taiwan) to be the legitimate Chinese state and refused to recognize the People’s Republic of China.

Nevertheless, the six students from MSU came up with a plan to visit the center of Mao Zedong Thought. Their first plan was to rent a yacht and sail it straight to China. But they thought better.

The six conducted weekly film showings to raise funds. Eventually, they had enough money to go to Manila and buy six plane tickets to Davao. They had exactly enough for the plane tickets, and little else. But they would have to hold their hunger for now; there was a whole world to win. The only thing between them now was a Philippine Airlines BAC-111 flight from Manila to Davao.

The plan was simple enough: Five minutes after takeoff, two hijackers would go to the cockpit and hold the pilots at gunpoint. They would then demand to reroute the plane to Peking, China.

Five minutes passed by and the first step of the plan was underway. Two hijackers stood up and began to make their way to the cockpit when they were approached by two flight attendants getting ready to distribute snacks to passengers. Thinking quickly, they pretended to be looking for the lavatory so as to allay suspicion. The plan, simple as it was, was already unraveling at the seams.

The minutes were tense. Fifteen minutes passed by and the passengers were busy eating their snacks. Unnoticed, the two men stood up and slipped into the cockpit.

A commercial flight from Manila to Davao today takes roughly an hour and a half from takeoff to landing. By 20 minutes, the plane would be thousands of kilometers in the sky, above the thousand islands of the Philippine archipelago, which seem like dots from that altitude.

At that height, the world seemed so insignificant. Ferdinand Marcos was plotting martial law. His armies were in the countryside chasing communists, who seemed to gather strength with each state-sanctioned atrocity. Manila was full of activists searching for meaning in an increasingly cruel world.

None of these thoughts raced through Chua’s head in those crucial moments. He was afraid. This was his first flight. It hardly dawned on him that riding an airplane was much like riding a bus. Hijacking one should be like hijacking a bus; though that wasn’t something he had tried either.

Chua felt the plane turn around. A flight attendant named Elizabeth approached him and told him that somebody in the cockpit wanted to see him. This was the signal. Chua and the remaining three companions stood up and drew their pistols, before urging the 44 passengers and five crew members to remain calm. He entered the cockpit to negotiate with the pilot, Captain Misa. At this point, the plan seemed to go smoothly.

But not quite. Misa informed the young hijacker that there wasn’t enough fuel to reach China, and requested to refuel in Hong Kong. Secretly, Chua feared that they would crash somewhere in the sea, out of fuel and out of hope. Chua agreed to the request.

Chua feared another thing: That they would be assaulted on reaching Hong Kong. A negotiation assured them that only a fuel truck and one crew member would approach the aircraft. In exchange, 19 passengers would be allowed to go free. The refueling took two and a half hours, but it was successful.

The six hijackers then asked for charts going to Peking. The Hong Kong authorities informed them that flights only went as far as Guangdong, which had an international airport. They agreed and changed their course to Guangdong. The flight took 40 more minutes before they landed in the Guangzhou Baiyun International Airport. It was 12 midnight.

The Chinese government welcomed the hijackers with an indefinite stay. The BAC-111 they hijacked was returned to Hong Kong the next day with the rest of the passengers and crew. Chinese officials welcomed the six hijackers and gave them food, which they finished as if they were starving.

The hijacking was a success; they had made history. It was a unique kind of hijacking. In 1968, Leila Khaled hijacked a flight from Rome to Tel Aviv on behalf of the Popular Front for the Liberation of Palestine. Others like D. B. Cooper used hijackings as tools for their heists. But Chua and the others’ goals were loftier: They wanted to see the truth.

For the next six years, they experienced that truth. In their first year and six months, they worked in a state farm in Hunan harvesting peaches. In the afternoons they would study Chinese. Outside of work, they would integrate themselves with the masses, learn from them, and learn with them. After that, they were asked to choose a field they wanted to excel in. Chua decided to work in an electronics factory. His fellow hijackers chose other fields like medicine, language, or engineering.

Work in a socialist country was nothing like employment under capitalism. There are no managers and no bosses. There is no capitalist who owns the factory. In China, workers had a say in all aspects of production, since they owned the factories.

In 1960, workers from the Anshan Iron and Steel Company created the Angang Constitution, which summarized their own experiences in running the factory and defined management practice. By 1971, most industrial factories in China followed the same model.

Agriculture was the same. Most farms were owned collectively by the communities or the Chinese state. China’s peasantry was in the process of modernizing and moving away from centuries of feudal landlord-peasant relations.

For the six hijackers, they managed to experience all of it; at least, for a short time.

Facing the Consequences in Manila

Things had changed by 1977. Mao Zedong had died the previous year. The zeal that carried the Cultural Revolution had long since waned, and bourgeois reformers like Deng Xiaoping were getting ready to make their return.

Something else stirred within the hijackers: the desire to go home. It turned out that leaving was harder than it seemed: As illegal immigrants, they couldn’t just return to the Philippines. The Chinese government took them as far as Macau, where they asked for assistance from a local church. The church helped them return to Manila, where they were promptly arrested.

Chua, Rosauro, and the others spent four years in Bicutan on charges of robbery. The Anti-Hijacking Law was only created on June 19, 1971, months after their successful heist, and so was not available to be used against them. But a charge must be filed for a supposed crime, and their supposed crime was stealing an airplane.

For the six hijackers, this is where the story ends. They were released after four years. Details about their lives were scarce after that. Today, Chua spends his days tending to his farm some kilometers away from the noise of city life. Rosauro had since passed on. Tigulo met Lilibeth Demetrio in 1985 in Cagayan de Oro and was married soon after.

The world has since turned enough times that the 1971 hijacking and the six years that followed seemed like just another episode. Today, we hardly hear much about who they are and what they did and much less what they saw. Mao’s China has long since disappeared into the night. The Red Sun has set and an imperialist one has risen under the guise of “socialism with Chinese characteristics.”

But some things live on. For Chua, memories live on. For the rest of the world, the old tremors of 1971 can still be felt, if you put your ears close enough to the ground.