A writer’s truth: The legacy of National Artist Bienvenido Lumbera 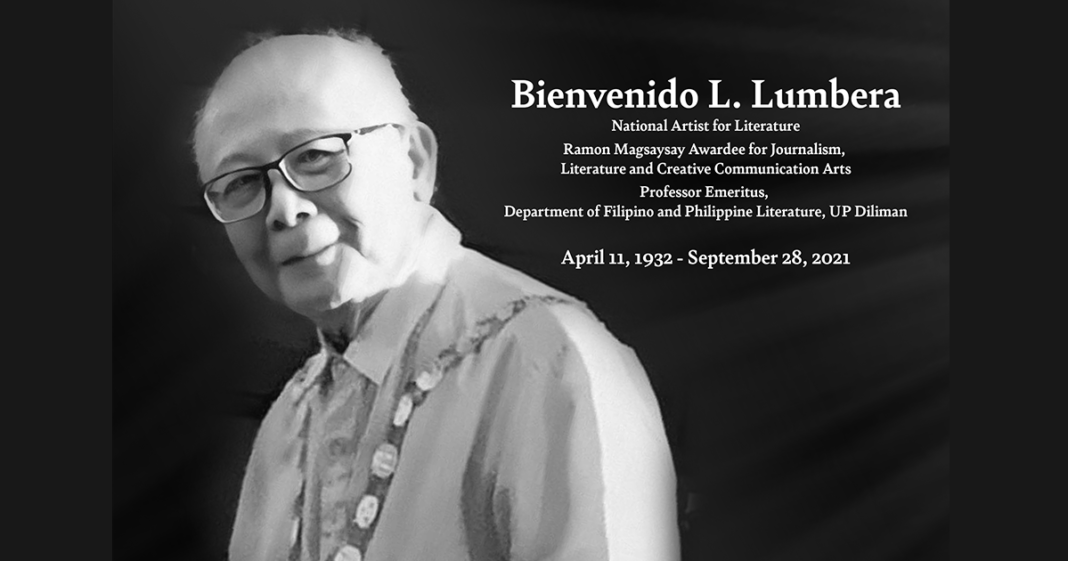 With his passing on September 28, 2021, at the age of 89, Dr. Lumbera—Ka Bien to his friends and colleagues—left behind a distinguished body of works and a legacy of fearless activism, harnessing the power of literature and the arts for the cause of freedom, truth, and nationalism.

A writer’s childhood
Dr. Lumbera’s literary work encompasses multiple genres, from poetry to stage plays and librettos. His love for these different genres stems from his childhood. Born in Lipa, Batangas, on April 11, 1932, to Timoteo and Carmen Lumbera.  Young Bienvenido was orphaned at an early age. He and his older sister Leticia were cared for initially by their paternal grandmother, then when the war ended, by his godparents, Enrique and Amanda Lumbera.

Despite the tragedy he had experienced at such a young age, Lumbera recalled having a rich childhood. He played with the neighboring kids, played the action movies he watched and listened to his aunts read aloud from the novella series in Liwayway magazine. His childhood experiences in the historic town of Lipa formed the foundation of his writing career.  One of his renowned musical dramas, Hibik at Himagsik nina Victoria Laktaw, is set in his childhood town.
Lumbera went to Lipa Elementary School and finished high school at Mabini Academy. Initially, he wanted to attend college at the University of the Philippines. However, his guardians, who supported his education, convinced him to enroll at the University of Santo Tomas instead. It was closer to their place of work. In 1957, he earned his B.Litt in Journalism from UST.  In 1967, he obtained his M.A. and Ph.D.  in Comparative Literature from Indiana University.  His groundbreaking dissertation focused on Tagalog poetry from the seventeenth to the nineteenth centuries. While studying in the U.S., he threw himself entirely into education in culture—film, theater, opera, jazz, and everything in between.

After coming home from the U.S., Lumbera taught Literature, Philippine Studies, and Creative Writing at the Ateneo de Manila University. This period saw his activist spirit ignite. He was involved in the Filipinization movement in the 1960s, and served as the chairman of the Panulat Para sa Kaunlaran ng Sambayanan (PAKSA), an organization of activist-writers. His activism was so well-known that when Ferdinand Marcos declared Martial Law in 1972, Lumbera knew he was among those targeted for arrest and was forced underground. He was arrested in January 1974, and released a year later after Cynthia Nograles, his former student at Ateneo de Manila University, appealed for his release. The two were married a few months later.
A nationalist writer in the time of Martial Law and beyond
In an interview with Rappler published on April 12, 2017, Lumbera shared an experience he had following his release from prison during Martial Law. He described how department stores hired people to dress up and pose in shop windows as living mannequins.

“So nandoon naka-display sila. Alam mong buhay ang mga tao na ito, pero hindi sila nakikipag-usap, hindi sila gumagalaw. Ang laki ng epekto noon sa akin. Naiyak ako,” Lumbera revealed. “Ang mga tao na ito ay mga tunay na tao, pero nagpapanggap na hindi tao. Parang ganon ang sitwasyon sa panahon ng Martial Law—na kailangan ng mga tao na magpanggap na iba sila sa tunay na pagkatao nila [So there they are on display. You know they’re alive, but they don’t speak, they don’t move. This had a profound effect on me. I wept. These are real people pretending not to be. This was how it was like during the time of Martial Law—people having to pretend that they are not who they are].” 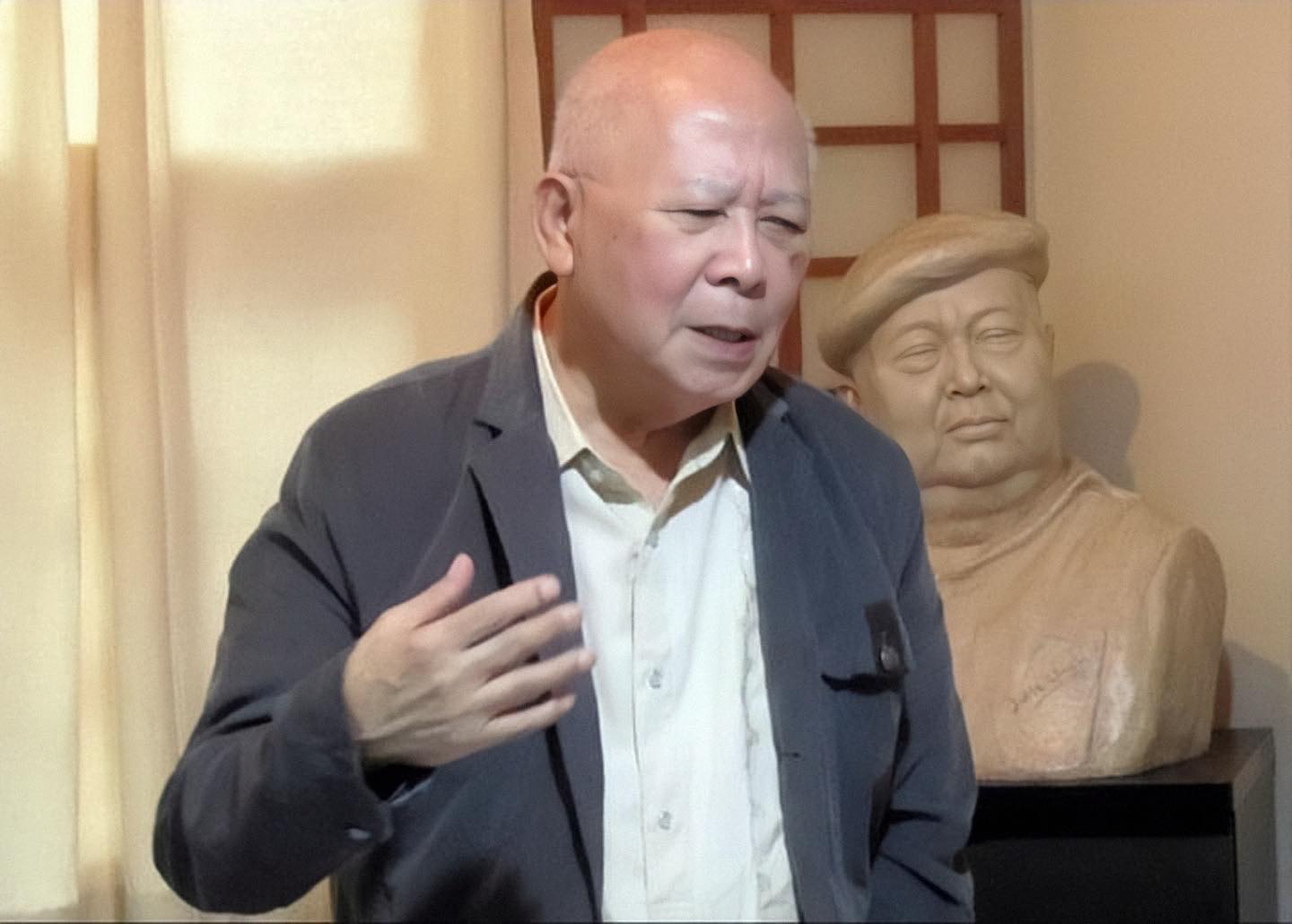 Photo from UP AVP Jose Wendell Capili.
For Lumbera, this experience and imprisonment only cemented his commitment as a truth-teller and nationalist writer. In 1976, through Professor Petronilo Bn Daroy, Lumbera began teaching at the Department of Filipino and Philippine Literature, UP College of Arts and Sciences (CAS). A year later, UP CAS Dean Francisco Nemenzo appointed him to become editor of the Diliman Review, which was critical of the Marcos dictatorship.

Lumbera began writing librettos for musical theater, starting with the Philippine Educational Theater Association’s (PETA) request to create a musical based on Carlos Bulosan’s America Is in the Heart. Eventually, Lumbera wrote several highly acclaimed musical dramas such as Tales of the Manuvu, Rama: Hari, Nasa Puso ang Amerika, Bayani, and Noli me Tangere: The Musical. He counts his adaptation of Dr. Jose Rizal’s novel, Rama Hari and Hibik at Himagsik nina Viktoria Laktaw, a tribute to Filipino revolutionary women during the revolution of 1896, as his most successful plays. In 2004, De La Salle University-Manila Press published Sa Sariling Bayan: Apat na Dulang May Musika, an anthology of Lumbera’s musical dramas.
Lumbera authored numerous books on literary criticism, textbooks, and anthologies such as Revaluation: Essays on Literature, Cinema, and Popular Culture; Pedagogy; Philippine Literature: A History and Anthology; Rediscovery: Essays in Philippine Life and Culture; Filipinos Writing: Philippine Literature from the Regions; and Paano Magbasa ng Panitikang Filipino: Mga Babasahing Pangkolehiyo. He once admitted he preferred writing poetry rather than short stories because he disliked using a typewriter for more extended periods. Most of his poems are collected in Likhang Dila, Likhang Diwa, published in 1994. These include “Ka Bel”; “The Yaya’s Lullaby,” “Servant,” “Sadness,” “Jamborzkie Light,” and the frequently anthologized “Eulogy of Roaches.”

Bayan at Lipunan: Ang Kritisismo ni Bienvenido Lumbera, edited by UP Professor Emerita Rosario Torres-Yu, was published and launched by the UST Publishing House, and celebrated by UP in January 2006.

Legacy of a writer, dramatist, and activist
In the end, Lumbera lived true to his belief that writers should immerse with the masses and help to improve society. He remained actively involved in progressive organizations fighting for social justice and true equality, from the Philippine Comparative Literature Association in 1969 to the Pamana ng Panitikan ng Pilipinas in 1970, to the progressive poets’ group Galian sa Arte at Tula (GAT) during Martial Law. Other writers’ organizations he helped lead include the Kalipunan para sa mga Literatura ng Pilipinas, the Philippine Studies Association of the Philippines, and Manunuri ng Pelikulang Pilipino.

Lumbera is also the founding chairperson of the Board of Trustees of the multi-awarded media group Kodao Productions. He was an active member of the Concerned Artists of the Philippines (CAP) and the Bagong Alyansang Makabayan (Bayan). He also served as president of the Alliance of Concerned Teachers (ACT), a national organization of more than 40,000 teachers and employees in the education sector.

He earned numerous awards and accolades throughout the years, including the Ramon Magsaysay Award for Journalism, Literature, and Creative Communication Arts, the Pambansang Gawad Pambansang Alagad ni Balagtas from Unyon ng mga Manunulat ng Pilipinas (UMPIL), the National Book Awards for Literary History/Literary Criticism from the Manila Critics’ Circle, the Carlos Palanca Memorial Award for Literature, the Philippine Centennial Literary Prize for Drama, and the Cultural Center of the Philippines Centennial Honors for the Arts. He became Professor Emeritus of the University of the Philippines and, in 2006, was named National Artist for Literature.

Dr. Lumbera’s legacy lies not just in his immense body of works and in the generations of writers and artists he taught. Most importantly, he is noted for his abiding commitment to nationalist writing and to his belief that a writer must, above all, write the truth of their experiences. (https://up.edu.ph/a-writers-truth-the-legacy-of-national-artist-bienvenido-lumbera/) September 28, 2021 | Written by Celeste Ann Castillo Llaneta