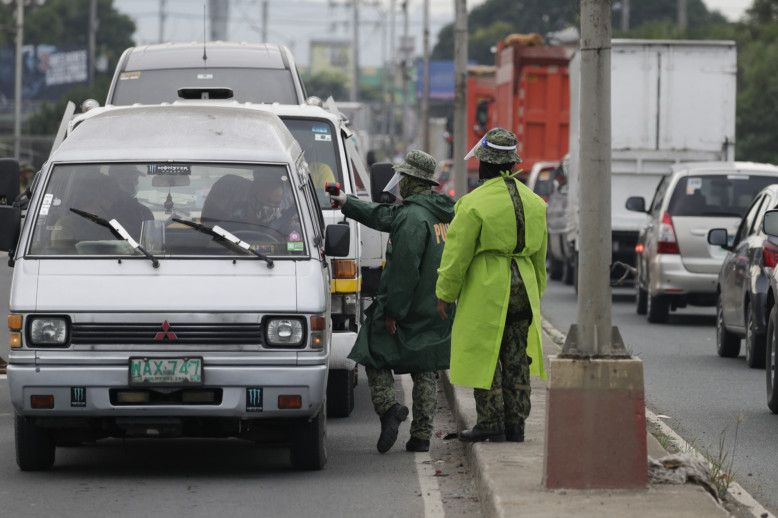 MANILA, Philippines — Claire Ann Milan, 43, works as a hair stylist at a salon where she earns just enough to buy food and other daily needs for her household. Ronaldo Morales is a 49-year-old machinist at a car shop in Valenzuela City and the breadwinner for a family of six. Both will be made to fend for themselves when Metro Manila and nearby provinces are locked down for two weeks starting Friday.

They are among the 167,000 Metro Manila workers expected by the Department of Labor and Employment (Dole) to be affected as the two-week enhanced community quarantine (ECQ), the strictest category in the fight against the pandemic, would force establishments in nonessential sectors, such as beauty and wellness and auto repair, to close shop.

“For us who work at the salon, it’s hard to have savings since we are not even minimum wage earners,” Milan said.

“As a responsible daughter, it is my duty to provide for my mother’s needs. But how will I do that if we are on a ‘no work, no pay’ [basis]?” she said.

“I can’t sleep because I keep on thinking that I have no idea how I will be able to support my family in the next two weeks. If I don’t have a job, then our family will have no money at all, no source of income,” Morales also told the Inquirer on Tuesday.

He said his family has never received financial aid from the local and national governments.

Presidential spokesperson Harry Roque earlier said that eligible residents of Metro Manila would receive cash assistance amounting to P1,000 per individual and up to a maximum of P4,000 for each household.

For Aaron Altoveros, a minimum wage company driver, this was hardly enough to cover the needs of his family of five, with two kids having lingering illnesses.

He lamented that such “ayuda” would be insufficient since a single meal at an eatery already cost P70, adding that “if they are going to impose a lockdown and that is the only aid they will give … we will die of hunger.”

When ECQ was imposed on March 29 in Metro Manila, Bulacan, Rizal, Cavite and Laguna, the government provided financial assistance of P1,000 per individual with a limit of P4,000 per family, to benefit some 22.9 million individuals affected by the strictest lockdown in these areas.

The ECQ was originally set for one week but was prolonged for another week until April 11. However, no additional aid was provided to low-income residents during the extended period.

Altoveros said that if the government was going to impose a lockdown, it should allow businesses to continue operating so that families with only one breadwinner like his would not be adversely affected.

He underscored the Nagkaisa Labor Coalition’s proposal to the Dole for unemployment support and work assistance guarantee, which should include a P10,000 income for those to be affected by the ECQ.

In the 17 months since the COVID-19 crisis, Morales said he scrambled to find odd jobs, from painting to repairing cars. The money he earned, however, was still not enough to sustain his household.

Morales said he used to tell his family to make do with what little money they had as Filipinos were still unsure when the pandemic would end.

With another two-week ECQ, he said he sat down with his wife and children again.

“We often encourage each other to keep fighting poverty. Without my family, I don’t know where I would be now. It has been really depressing for all of us,” Morales shared.

Vie, a 35-year-old accounting staff based in Metro Manila, lost her job because of a previous lockdown.

As the family’s breadwinner, Vie resorted to selling various goods she considered popular online and helped her mother sell street food in their neighborhood.

She was also infected with COVID-19 in April, isolating her from her loved ones. Vie’s mother later suffered severe pneumonia and had to be hospitalized for a week, leaving their family helpless and without a source of funds.

“We are really scared to go out, to be honest. We thought that ECQ would be better since we won’t be obligated to go out, but it’s still difficult for us because of the ‘no work, no pay’ policy,” she said in an online exchange.

She noted that the P4,000 maximum aid for a family would last about a week to buy her family’s most basic needs such as rice and meat. Like Morales, she has not received even a peso from the government.

“We will have to make do with what we have. I’m thankful that I have friends who help me in any way possible but we’ll keep working hard,” Vie said.

“It’s like we’re begging on the street for the government to give us cash aid just to survive. But until when will we have to endure? Everyone is already having a difficult time because we have nothing left,” Morales said.

The cash assistance to some 10.7 million Metro Manila residents during the two-week lockdown would come from the P13.1 billion in savings of various departments and agencies, according to Roque.

He said an administrative order from the President issued in May had directed the government to identify savings from their respective appropriations under the national budget so that these could be tapped to help the administration’s pandemic response.

A lawmaker has also urged the government to use the “quickest and best way” to distribute cash aid to affected individuals in areas under ECQ.

BHW Rep. Angelica Natasha Co said it could distribute the cash aid through the Dole, the Social Security System, and the Government Service and Insurance System, which could use money transfer outlets as well as electronic payment systems.

For House ways and means committee chair and Albay Rep. Joey Salceda, a ramped up vaccination has a very direct role in the job security of millions of Filipinos.

“[Lockdowns] are no longer the best approach at this stage of the pandemic. More jabs will save jobs,” he added.

While the movement of residents would be limited, Metropolitan Manila Development Authority Chair Benhur Abalos assured the public that the movement of trucks carrying essential items would be unhampered as the Metro Manila mayors have agreed to suspend the truck ban.