‘BEEastMode’: Workers urge public not to patronize Jollibee, JFC products in the meantime 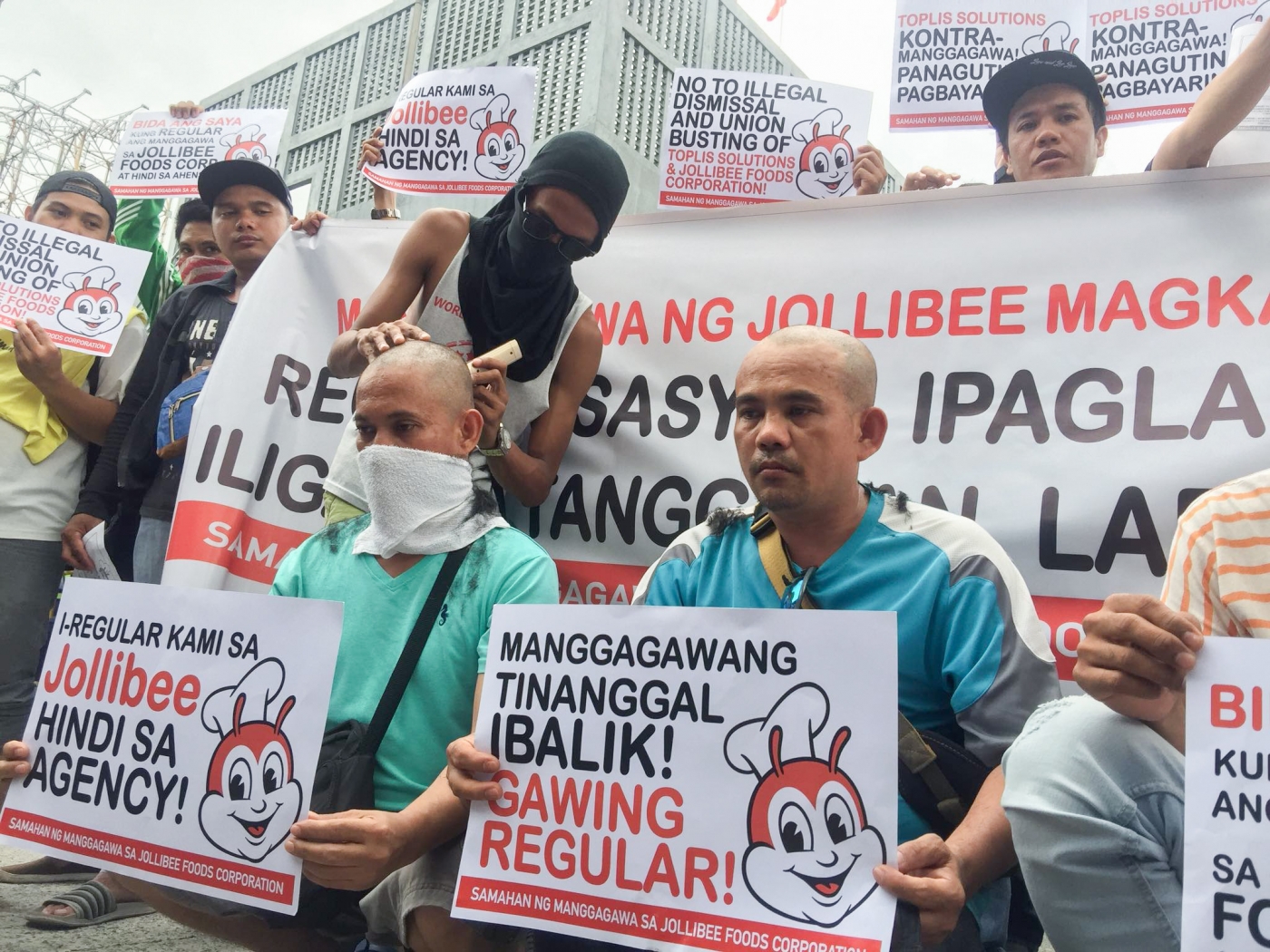 During a picket protest at the main commissary and warehouse of Jollibee Foods Corporation in Parañaque City today, dismissed Jollibee workers shaved their heads in condemnation of JFC’s termination of its agency service contracts with Toplis Solutions and Staff Search Agency last week. JFC’s move led to the lay-off of hundreds of workers that the workers condemn as illegal.

Workers in the JFC commissary and warehouse have been engaged in storing, handling and distributing products and other logistical needs of all other warehouses and Jollibee stores in Luzon and have been providing logistics services to Jollibee, Chowking, Greenwich, Burger King, Mang Inasal, and Red Ribbon stores and outlets.

Laid off workers also challenged Department of Labor and Employment Secretary Silvestre Bello III and President Rodrigo Roa Duterte to intervene and strictly implement its prior rulings that JFC must regularize its workers, amid JFC’s massive retrenchment of workers and the numerous termination of agency contracts.

“We appeal to Secretary Bello and President Duterte to order JFC Founder and Chairman, Tony Tan Caktiong to stop its illegal activities against its workers, immediately start to comply with the regularization order and stop circumventing the law just to push its anti-workers policies,” said Rogelio Magistrado, president of the Samahan ng Manggagawa sa Jollibee Foods Corporation (SM-JFC).

Protesting terminated workers also launched their #BEEastMode campaign which aims to urge Filipinos across the country and even abroad to temporarily not patronize JFC as form of public support to fastfood giant’s workers call for regularization and to stop the series of mass lay-offs of contractual workers and agency contracts.

In the #BEEastMode campaign, SM-JFC and Defend Job Philippines urged the public not to buy products of JFC and all of the subsidiaries and affiliates including Jollibee, Chowking, Greenwich, Red Ribbon, Yong He King, Hong Zhuang Yuan, Mang Inasal, Burger King, Highlands Coffee, Pho24, 12 Hotpot, Dunkin’ Donuts, and Smashburger.

Magistrado appealed, “We ask for understanding and support from our fellow Filipinos in the country and even abroad not to buy products of JFC and all of its affiliates and subsidiaries for the meantime until JFC adheres the DOLE ruling to regularize all its contractual workers and reinstate all of its terminated workers.”

“Every cent that would be deducted to the earnings of JFC would add pressure for the big corporation to heed our long-drawn demands for regularization, higher wages and better working conditions inside our workplaces,” Magistrado ended.

The post ‘BEEastMode’: Workers urge public not to patronize Jollibee, JFC products in the meantime appeared first on Manila Today.