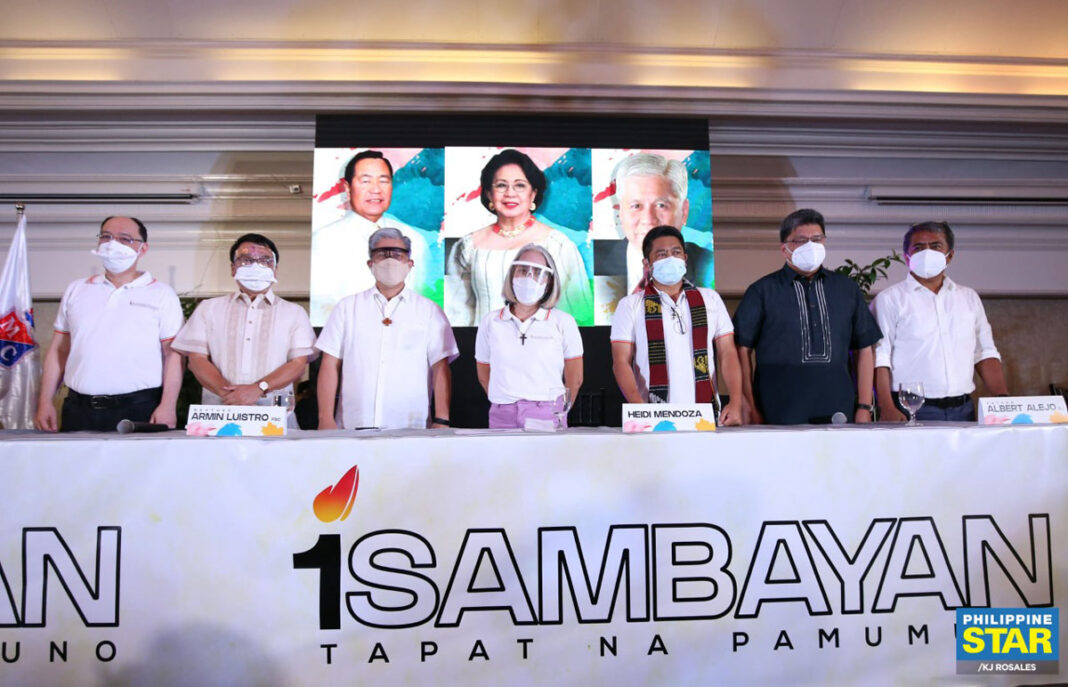 Political coalition 1Sambayan on Saturday, June 12, revealed the list of nominees that it will consider as possible candidates for president and vice president under a unified opposition slate next year.

Video messages from Robredo, Trillanes and Villanueva were played during the event, while Poe and Santos-Recto issued separate statements saying they have no plans for 2022.

Diokno, meanwhile, said he is very honored by the nomination even though he never aspired for those positions.

1Sambayan convenor and former Supreme Court senior associate justice Antonio Carpio said all six candidates have agreed to support their final decision on who will run under a unified opposition slate.

“Our purpose is to unite all the democratic forces, to come up with one slate. The first thing that we ask any candidate who wants to be considered is ‘will you abide the decision of the 1Sambayan?’” he said during the virtual event where the names of the nominees were released.

“If you are not chosen, you have to support the candidate that we choose. All of them so far have agreed to abide by the decision of 1Sambayan, by the convenors,” he added.

The coalition has yet to release the names of those being considered for the Senate slate.

Robredo is the chairperson of the once-ruling Liberal Party, while Poe is an independent who lost to President Duterte in the 2016 presidential elections. She was re-elected to a second term as senator in 2019.

Like Poe, Villanueva also has an experience running for president – in 2004 and 2010, which were won by former presidents Gloria Macapagal-Arroyo and Benigno Aquino III, respectively.

Trillanes, who was Poe’s running mate in 2016, is a member of Magdalo Party-List, which is part of the 1Sambayan coalition.

Santo-Recto, former mayor of Lipa and governor of Batangas before joining Congress in 2016, was previously part of LP. She and her husband Sen. Ralph Recto joined Nacionalista Party in 2018.

Meanwhile, Diokno – chair of Free Legal Assistance Group and former dean of the De La Salle College of Law – ran an unsuccessful campaign for Senate in 2019. He was part of the opposition slate known as Otso Diretso.

Manila Mayor Francisco “Isko Moreno” Domagoso and Sen. Nancy Binay have declined to be included in the list of potential opposition candidates, according to Carpio.

He said Domagoso, who was initially interested in the process, asked them to remove his name from the list of those being considered as opposition candidates.

“We have talked to him and he said he was interested. But the other day, he wrote us saying that he wanted his name taken out of the list of nominees,” said the former magistrate. “We respect that so we have removed his name for possible candidate for president or vice president.”

The Manila mayor, who is being pushed by some groups to run for higher office, has yet to announce his plans. His reason for asking his name to be removed from the 1Sambayan list has yet to be disclosed.

Read More: Isko Moreno: The Right Time Will Come To Talk About Politics

Sen. Panfilo Lacson, who is also considering another presidential run, earlier declined to join the selection process of 1Sambayan for a unified opposition slate.

Asked why their group invited Lacson given that he is a proponent of the anti-terrorism law, Carpio said there is aa referee on the matter, referring to the pending petitions against the law before the High Court.

“We may have differences with Sen. Ping Lacson on the anti-terror law but that will not define our relationship because that issue will be decided by the Supreme Court,” he said.

1Sambayan, which includes members from across the political spectrum, has yet to release the timeline for the selection process, which will include a online voting and interviews with the choices.

But former foreign affairs secretary Albert del Rosario said winnability is not the only factor that they will take into account in selecting the final slate.

“Character, capability and track record will also be considered,” he said. “Consultations with different sectors are ongoing. We have heard from the youth, women, farmers, OFWs (overseas Filipino workers), the health experts and many others. They are eager to participate in this drive for national recovery.”

After the selection process, which is expected to end before the filing of certificates of candidacy in October, Carpio said their group will take part in the campaign.

While 1Sambayan has its own stance on various issues, Carpio said they jointly formulate a final platform with the selected standard bearers to take into account their positions.

“It will be give and take, we’ll have to come out with a common platform after we have chosen them,” he said.

Led by former government officials and representatives from so-called “pro-democracy” groups, 1Sambayan seeks to field a unified slate against the administration candidate in next year’s polls.

The coalition noted how Duterte won the plurality of votes in 2016 because of the different candidates that broken up the votes.

“The understanding of everybody is that unless we are united, we cannot win in 2022. The unifying force is that we have the majority, but the majority will become a minority if they are divided,” Carpio said during the group’s launch in March.

He stressed that Filipinos deserve to have a better government, describing the present Duterte administration as incompetent.

“Instead of focusing on effective measures to contain the pandemic and on jumpstarting economic recovery, the present administration has wasted precious time and resources on charter change, shutting down mass media, threatening businesses with cancellation of franchises, threatening the academic freedom of universities and terrorizing legitimate dissenters with surveillance and arrests,” he added.