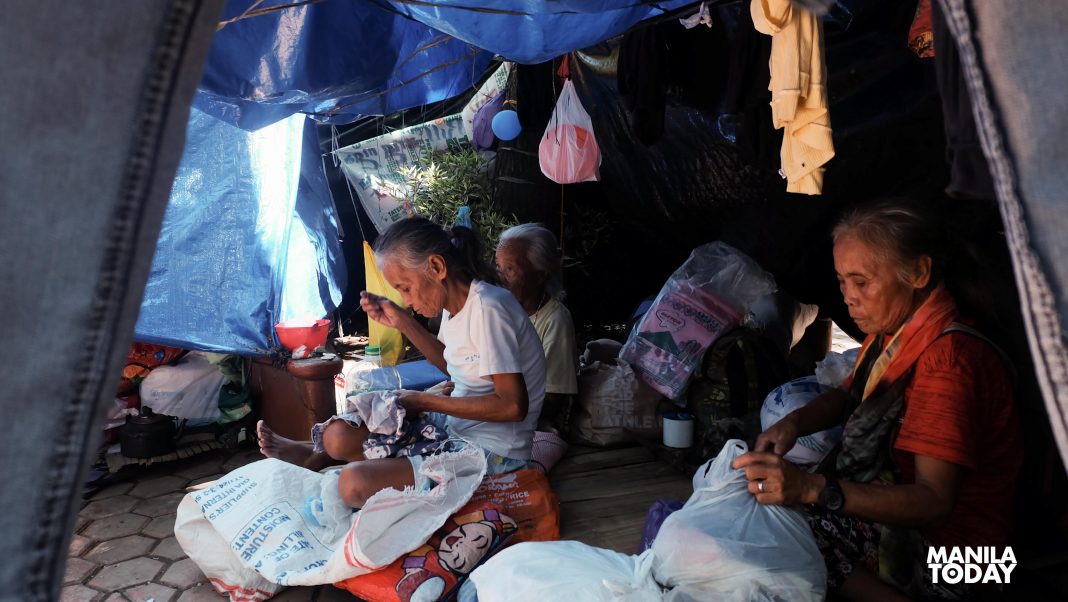 Higaonon ‘bakwits’ in Cagayan de Oro find it ironic that the national government is holding its first Mindanao-wide indigenous peoples summit in the city when only IP groups from Caraga and Southern Mindanao cooperative of the government are invited.

Barely a mile away from the summit’s venue is their ‘bakwit camp’, where stories of the real plight of the Lumad could be heard.

For the fourth time in six years, residents of Sitio Camansi in Barangay Banglay, Lagonglong Town, Misamis Oriental once again fled to the Provincial Capitol grounds in Cagayan de Oro, away from soldiers encamped in their community.

Thirty-eight Higaonon families were forcibly evacuated on May 26 following a series of threat and harassment incidents by members of the Philippine Army’s 58th Infantry Battalion.

But unlike the previous years, the families are doubtful if they could return to their homes as the soldiers are building a detachment in Sitio Camansig.

Almost four weeks ago, military men began arriving in Sitio Camansi while the villagers were busy tending to their farms. Datu Reynaldo Ayuma, chairperson of Tagtabulon Lumad Organization, and other elders immediately advised community members to prepare for evacuation.

With help from the local government unit and from the families, they managed to hire jeepneys to transport them to the Capitol, but not without difficulty. They were barred at military checkpoints five times, with soldiers saying their vehicles could not pass through. But the ‘bakwits’ were determined to get to Cagayan de Oro, even deciding to leave the vehicles and continue on their journey by foot. They arrived at the Capitol on June 3 in the evening.

Higaonon representatives and the military, together with provincial officers held a dialogue on June 8 where government assured the villagers that a military detachment will not be constructed. But to their dismay, soldiers had already started building the detachment in Sitio Camansi.

Another group of Higaonon families arrived at the Capitol grounds this week, also seeking sanctuary from elements of the 58th Infantry Battalion who have occupied their homes.

Fifteen families from Sitio Anahaw, Brgy. Bantaawan in Gingoog City fled their community after soldiers threatened to tag villagers as members of the NPA (New People’s Army) if they “continued to support” the armed organization.

While the military claims that their encampment is only warranted by their construction of a bridge and concrete road, the Higaonon assert that they are used as instruments to facilitate the entry of big business developers.

Lagonglong is known for its hot springs produced by the adjacent Mount Balatukan. It is said that the mountain and the lake in Barangay Bantawan in Gingoog City are rich in gold deposits.

In a December 2107 report, the (DOE) Department of Energy has awarded Energy Development Corporation the Balatukan-Balingasag Geothermal Project with a potential capacity of 20.00 MWe. The project includes 14 cities and municipalities in Bukidnon and Misamis Oriental, including Lagonglong.

Rights groups see the military as ‘investment defense forces’ to hasten the ingress of big capitalist ventures such as mining, logging, and export plantations. Through a so-called counter-insurgency program spearheaded by the AFP (Armed Forces of the Philippines), soldiers justify harassment, threat, and extrajudicial killings of Lumad peoples.

Cases of Lumad killings in Northern Mindanao include Jimmy Liguyon, a village chief in Bukidnon, who refused the takeover of indigenous lands in San Fernando; Gilbert Paborada, who resisted A Brown’s palm oil plantation in Opol; and Renato Anglao, who was shot in the head three times for defending the ancestral lands of the Manobo-Pulangihon tribe in Quezon Town, Bukidnon.

Read: The mountains are loved by my people

Datu Reynaldo and the Higaonon of Sitio Camansi remain wary of their precarious situation, even so that martial law is in effect until the end of the year. “Soldiers tell us that under martial law, it is their orders that must be obeyed. Our demands and concerns fall on the military’s deaf ears,” he said.

However difficult their situation at the ‘bakwit camp’ may be, the Higaonon are resolute in staying. It is by protesting in the city that their wish to return to their communities could be fulfilled.

“We Higaonon always welcome development. But we have to be critical of so-called development projects that would drive the Lumad away from their ancestral lands,” said Datu Reynaldo.

“If that is the case, then resistance is the only response.”