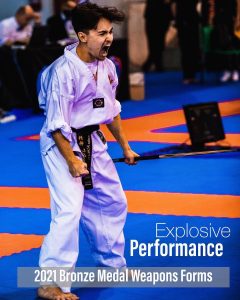 FIL-CAN martial artist Tommy Gesell won a bronze medal in the Musical Forms/Weapons division at the 2021 World Association of Kickboxing Organizations (WAKO) Senior and Master World Championship. The tournament took place in Jesolo Lido, Italy from October 15 to October 24, 2021. Gesell first competed as part of Team Canada at the WAKO World Championships in Antalya, Turkey in 2019, where he placed fourth but was asked to perform in front of the Olympics committee at the gala night. This year, he was excited to witness how the musical forms division has grown since he last competed and expressed his admiration for his fellow competitors. “This time it grew times two—times three even. And we had world champion competitors in my division, which was really cool to see. So, I’m pretty proud of where I placed within that batch of competitors, because I know how amazing they all are as well,” he said.

Gesell has a third-degree black belt in Taekwondo and is an instructor at DeSantos Martial Arts School in Toronto where he started his martial arts training at seven. He was born in Canada to his Filipino mother, Leslie, and American father, Tom, who raised him to be a well-rounded individual. In addition to growing up performing as part of the DeSantos Martial Arts demo team in different festivals, sporting events and parades across the city, Gesell also plays the piano and saxophone and has done a few gigs as a child actor/model including a music video for Australian rock band The Getaway Plan, online commercials for Spider-Man and Angry Birds, Walmart flyers and the One of a Kind fashion show at the CNE. He is now a 21-year-old Business Management student and is on the Dean’s List at Ryerson University.

During our phone interview, I could tell that Gesell embodies one of the key character traits of black belt excellence. Despite all his talents, abilities, and achievements, he remains humble. We discussed how he adjusted his routine during the pandemic, the values instilled by traditional martial arts and how training from an early age has shaped his life.

TPR: How did you train for this tournament given that there was a pandemic and there was a time when all the dojos were closed?

TG: When COVID hit, I was more so focused on school going into my first co-op work term. I wasn’t attending the online classes as much as I wish I could have. One of my goals from the last competition when I didn’t place as well as I hoped was to learn more difficult tricks. So, I was teaching myself a couple gymnastics tricks and kicks from home in my backyard using this little gym pad that my neighbor gave me. I was teaching myself through winter and getting my cardio up running every day. Then once the school finally opened over the summer, I was able to start training there and doing private lessons with my coach and that’s when I really ramped up my training.

TPR: Speaking of traditional martial arts compared to the non-traditional styles like MMA that have gained traction over the years in gyms that teach purely fighting or competitive sports techniques without the character-building aspects of traditional practices…there seems to be a debate between camps on opposite ends of the martial arts spectrum. Fans of one end of that spectrum believe that maintaining old school traditions like katas, meditation, character development and other practices don’t apply in modern life. What are your thoughts on that?

TG: I feel like that kind of question is raised in movies like Karate Kid. Or the show Cobra Kai is kind of both sides of the spectrum where you have the traditional routes and Mr. Miyagi, what he’s teaching, and then you have Cobra Kai who’s just all about fighting and being aggressive and being the winner. And I feel like, of course, when you’re on opposite sides of the spectrum for Mr. Miyagi’s side, for example, it’s all traditional. It’s all about building your character. And I feel like that’s more of the journey type of thing. I didn’t compete a lot when I was a kid. It’s only kind of now that I’m just taking that in and utilizing the strengths and stuff that I’ve learned over the years. So, it’s more about the journey for me. For people that like to do MMA and that kind of thing, I feel like they’ll have a stronger background coming into it if they came from a traditional background. They’ll have a strong mindset coming into it. And I feel it’s definitely beneficial to come from that kind of background.

TPR: How has training since childhood impacted your life growing up?

TG: Well, the main thing for me is confidence. Before I started training at DeSantos, I was pretty insecure—as insecure as you could be for a second grader. And being bullied, just not being comfortable with who I am and my abilities and all that. So, I really learned to be comfortable with myself. I learned to be confident in front of others, performing in front of others, competing in front of others, and just striving to be my best. And then those principles of black belt that I’ve learned over the years, I’ve carried on to other aspects of my life. My self-discipline with my schoolwork has led me to be part of my co-op program, and land some of my co-op jobs. I have it on my resume because I feel like it’s valued a lot in other aspects of life, outside of just martial arts. I’ve even had recruiters tell me that one of the things that stood out on my resume was my martial arts training, because they know what having a black belt comes with, as a person. So just the mental standpoint, and where it’s brought me in my life mentally is just something I’m grateful for.

TPR: If given the chance to train or work with any famous martial artist, who would you choose and why.

TG: That’s tough. If you asked me this a couple years ago, I would have said, Jackson Rudolph. He was the main martial artist that I was watching for musical forms. And he’s one of the reasons I love competing in it. But I did get a chance to train with him because he came to my school. He actually helped me with my form when he was there. I guess in terms of celebrity, I’d have to say someone like Jackie Chan, just because I love his movies so much. I grew up watching him, and I just love him as a personality. So, I’d love to get to train with him, see what his workouts are like, ask him about his diet and stuff like that.

TPR: Do you have any plans of maybe getting into stunts and movies?

TG: That would be amazing. I’d love to see myself in the credits for like a Marvel movie. I guess you could say that’d be a huge dream as one of the stunt people in a movie like that. So, I guess I could say that’s one of my goals. Yeah, that’d be awesome.

TPR: So, what are your next plans?

TG: So, inside the dojang, my plans are to continue my training. I kind of took this week to focus on my school and get caught up with everything. But I went back to tournament training yesterday morning, which was really nice. It was great to be back on the floor.