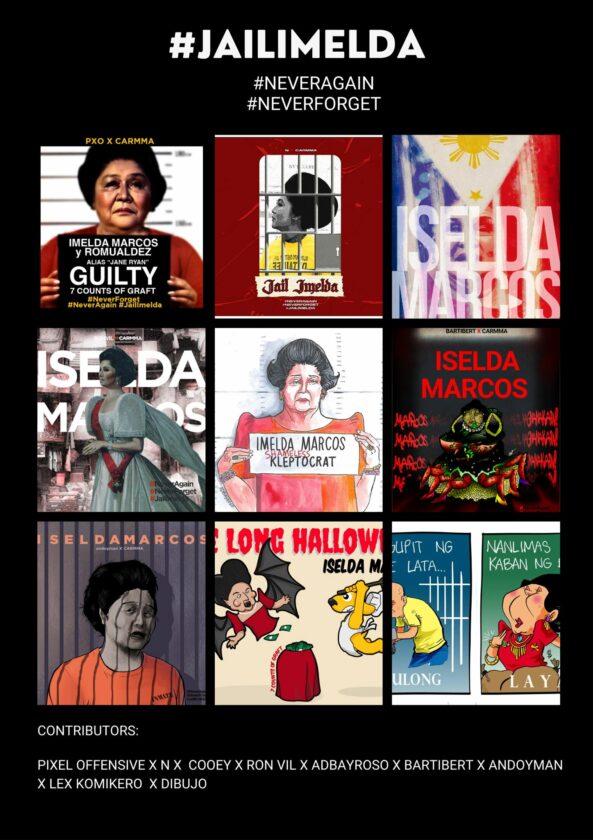 MANILA – Filipino artists are calling on the government to jail the other half of the Marcos conjugal dictatorship, Imelda Marcos, who has been convicted of several graft charges three years ago but remains scot-free.

The Campaign Against the Return of the Marcoses and Martial Law (Carmma) posted on its Facebook Page artworks of 44 Filipino artists, whose works depicted Marcos behind bars, saying there “is no place for criminals” but this.

This was posted days after the victims and survivors of the Marcos martial law filed a petition before the Supreme Court to uphold the conviction of the wife of the late dictator.

“We suffered during the Marcos conjugal dictatorship and we continue to suffer as we continue to see that Imelda is out of jail, out of accountability. The dictator’s widow continues to live the life, not sickly and dirt poor, as she receives all the geriatric care she wants and needs using all the wealth from the people’s pockets accumulated in their more than two decades of power and might,” SELDA Vice Chairman Danilo dela Fuente said.

SELDA is an organization of political prisoners in the country.

In a 2018 decision, Sandiganbayan found Marcos guilty of seven graft charges of corruption in relation to the Swiss foundations she established while in public service from 1968 to 1986. This, the decision read, allowed her to pocket at least $200 million from public funds. (JJE, RVO)