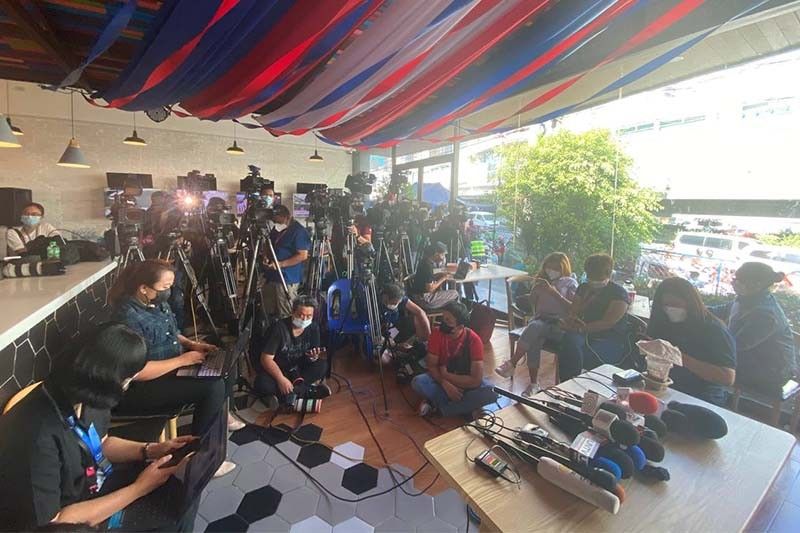 For some journalists, election night was a nightmare possibility they tried not to dwell on, clinging to the smallest shred of hope until the possibility became certainty. As results poured in at an unprecedented speed on the evening of May 9, they watched on TV screens as it became clear that they were witnessing a democratic exercise that saw more than 31 million Filipinos choose the dictator’s son to sit in Malacañang.

“For the first time I felt really threatened,” said one reporter for an online news outlet who, like many others interviewed for this piece, opted to remain anonymous for fear of backlash. “The threat was real. I felt unsure if I still want to be a journalist moving forward.”

The perceived threat is that a Ferdinand Marcos Jr. presidency would see a repeat of the repressive media policies his father implemented during Martial Law and in the years before his ouster. Censorship. Shutdowns. Takeovers.

It’s not like Marcos Jr. would be starting from scratch. The administration of his predecessor, President Rodrigo Duterte, has relentlessly attacked independent and critical media. The Philippine Daily Inquirer has been financially weakened. Rappler has faced several court charges. ABS-CBN is gone from free TV.

The campaign trail and beyond

Then, there was Marcos Jr.’s treatment of journalists covering him during the election campaign. Access was difficult and interviews to scrutinize his plans for the country were scarce and often only done with outlets the campaign liked.

When reporters tried asking questions during campaign sorties, they were blocked, pushed and shoved by his security detail. After the elections, Marcos Jr.’s spokespersons have ignored questions and have arranged interviews exclusive to select networks.

All these have been raising doubts in the minds of some journalists. Would staying in a profession of truth telling still be worth it in the face of another administration potentially hostile to the press?

Reporters Without Borders, which monitors press freedom, notes in its 2022 fact file on the Philippines the return of “‘red-tagging’ – a practice inherited from the colonial era and the Cold War, whereby journalists who do not toe the government line are branded as ‘subversive elements’ or ‘reds’, which amounts to pointing them out to law enforcement as legitimate targets for arbitrary arrest or, worse still, summary execution.”

Others, as Regine Cabato of the Washington Post details in a recent dispatch, are swamped by a steady stream of online harassment that can get so foul that, she writes, “I’m almost relieved when someone calls me a slut or some other generic slur, because I’m always expecting something worse.”

The hostility would be a bonus on top of the long hours, low pay and threats to their physical and psychological safety that journalists have been working in for decades.

“To be a journalist in a third-world country like the Philippines, you have to admit that what you make isn’t enough. And your family also has to make sacrifices for you to live that dream and that purpose. Am I going to put them under more pressure? Am I going be more of a hassle?” said another reporter for an online news outlet.

A March 2021 survey by the National Union of Journalists of the Philippines of more than 200 media workers found that 44% of them receive just up to P15,000 monthly, 55% do not get overtime pay, half do not get holiday pay, hazard pay and insurance, and 40% do not have access to a health card.

As more journalism work shifts online, the International Federation of Journalists wrote in 2021 that “the vast majority of the new jobs being created are poorly paid, more precarious and with fewer benefits than the jobs they seek to replace.”

Journalists in the digital space — and almost all journalists are, in varying degrees — “work longer hours, have an overwhelming workload, are expected to have more skills than their colleagues but receive less training, have more health and safety problems, face a massive increase in ethical and professional issues, work with smaller budgets and fewer resources and earn less.”

Despite the poor working conditions that many Filipino journalists face, more would be inclined to stay and soldier on in this often thankless profession — if they had the backing of their managers. However, as newsrooms come under increasing political and economic pressure, this has become difficult in many newsrooms and impossible in some.

For the newspaper reporter, Marcos Jr.’s victory in the May polls was just the last straw. The reporter has seen how the press yielded inches not just to the government but to other “sacred cows” in the past six years under Duterte, leaving doubts whether journalism can mount a proper defense if it gets attacked again.

“We didn’t fight hard enough when Duterte pushed us against the wall,” said the newspaper reporter. “I don’t think newsrooms will suddenly grow a backbone just because they’re up against a more difficult opponent. If anything, they will just cower more. They will just toe the line.”

Reporters Without Borders writes that mainstream media in the Philippines has seen increasing levels of ownership concentration, and that in some corporate newsrooms journalists “have little editorial autonomy, self-censorship is the rule and respect for journalistic ethics is not guaranteed.”

“The internet and social media offer a space where many independent media can work freely but their economic viability is uncertain,” it also notes.

A senior journalist who has since left the industry had this to say: “I left journalism with a clear head, but I was frustrated. I entered the media outlet I was in because I believed in the values that it upheld, but over the years, I saw these values slowly being eroded. It became harder to stay mainly because of that, and being paid so little did not help.”

Fears of censorship, danger of irrelevance

The imagined difficulty for journalism under another Marcos administration varies from journalist to journalist. Some fear a martial law redux. Others say the press would be bogged down by battling bogus court cases. Most are grappling with the decline in trust in journalism.

“Censorship,” the former journalist said. “During the presidential campaign, stories criticizing the Marcoses were already being sanitized. Some stories would not even be published online to limit circulation. I’m certain this will get worse following Marcos’ win.”

Those moves would see even more journalists leave the profession to work in advertising, public relations and other industries “as their safety nets become fewer and less reliable,” the former journalist, who now works at a high-rise in Bonifacio Global City, said, adding “journalism being its own reward is romantic but not sustainable.”

Those that do stay will still have to convince more Filipinos to rely on them for news and information.

“The disinformation campaign has succeeded farther than our practice of truth-telling and fact-checking,” said one broadcast journalist. “What can we do if people believe more in fake news, fake information? Is it even worth it anymore? Our pay is low, harassment is a real problem, and then they won’t believe you?”

For Lian Buan, a reporter for Rappler who covered the Marcos campaign, the president-elect’s 31 million votes “is an indictment of facts and journalism as a profession” that has left the industry unsure of how to move forward.

“Maybe we’re really going into an information war more than anything else, where facts are drowned out, journalists are very discredited,” Buan said. “What purpose do journalists serve if those they serve don’t listen to them?”

The 2022 Digital News Report by the Reuters Institute for the Study of Journalism confirms this bleak assessment. While overall trust in news among Filipinos rose by five percentage points to 37%, this is still below the global average of 42%. Trust ratings of individual news brands are falling, along with interest in news and its consumption.

Meanwhile, trust in social media influencers is on the rise. Research by communications professors Cheryll Ruth Soriano and Edson Tandoc Jr. showed that influencers achieve this by propping themselves up as everyday people in a quest to find truth that is only now coming to light because of social media — all while discrediting traditional media channels as elite and untrustworthy.

It is this that drives one newspaper reporter to continue working in the industry, despite poor work conditions and the looming threats. “We need to continue with what we’re doing,” the reporter said. “Because if we stop, if we don’t mobilize, we might get drowned by lies, by false information. That’s the scary thing that should not happen.”

To help keep that from happening, some newsrooms have ventured into unfamiliar platforms like TikTok and YouTube, hoping to combat disinformation where it is found and also meet their intended audience where they are.

These attempts to make the news more relatable and accessible do not come without dangers: There is the tension, for example, of being more engaging without losing the rigor and principles that help define journalism.

Acknowledge a defeat to stay in the fight

The first step to keeping the fight against disinformation going, Buan said, is for the press to acknowledge that they have lost the battle to microinfluencers and vloggers who are now dominating what she called a field that journalists were masters at.

“Every solution and every adjustment that we will think of, if not premised on the acceptance that we lost, might just be futile because we wouldn’t be able to attack it in the way that it should be addressed,” she said.

But, she said, journalists should not be the only soldiers in this battle for truth and trust, she said.

“This will be a whole-of-society approach. It can’t be just journalists anymore,” she said. “If this is a war on truth, then we need more defenders as never been needed before.”

“The power of journalism in a country [depends on] its journalists,” the former journalist, who had expected to stay in the profession until retirement age, said. “They need the unyielding support of their employers, the decent compensation to go with the profession, and the willingness of their readers to engage.” — with Jonathan de Santos