Gordon to Duterte: ‘You are not a President that Filipinos can respect’ 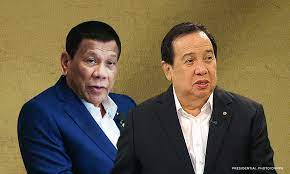 MANILA, Philippines — Senator Richard Gordon on Friday continued his offensive saying President Rodrigo Duterte does not act like a president, and is not a president that the Filipino people can respect.

At the continuation of the Senate blue ribbon committee’s investigation on the government purchases amid the pandemic, Gordon minced no words in saying that Duterte’s reputation preceded him even during international conferences with other world leaders.

“Mahirap tangkilikin because you do not act like a president. Today, I tell you, you are not a President the Filipino people can respect,” Gordon said, addressing Duterte.

Duterte has recently made Gordon the butt of his regular Talk to the People address, which was supposedly conceptualized to apprise the public of how the government is responding to the challenges of the coronavirus pandemic.

In one of his tirades, the President made much ado over Gordon’s girth and lengthy interpellations, with a promise that he will campaign against the senator in next year’s elections.

But Gordon said he may not even run in the 2022 elections and turned the tables on Duterte who has accepted his nomination as the vice presidential candidate of the ruling PDP-Laban party.

Gordon likewise turned emotional after Senate Minority Leader Franklin Drilon as well as Senators Francis Pangilinan and Risa Hontiveros voiced out their support towards Gordon for his “courage” amid the Senate blue ribbon committee’s investigation.

“Whether you accept it or not, these are times when courage must come out with what is happening. It is so difficult to live during these times,” Gordon said.

“I hope that our countrymen will find it in their heart to see the truth. I’m not saying that we are right all the time. Panindigan natin ang ating pagsisilbi sa bayan at pagmamahal sa bayan,” he added.