Lost in those words uttered by Rodrigo Duterte as president in 2020 was the value of human rights not just as a vague idea or concept but as a key cog in the machinery that nations use to achieve inclusive progress, one that is measured not by the amount of wealth that is produced but how that wealth is distributed.

It has been well-documented that nations with enormous wealth but with no respect for human rights do not attain progress for their people but only for a small circle of elites in government and those in control of resources.

The argument for progress as a worthy trade for human rights or that human rights is an obstacle to progress often finds an example in Singapore, a small island state where criticism of government comes at a very high price but where discontent is nearly absent mainly for one reason—very little or zero corruption in high places.

When Duterte said he didn’t care about human rights, he was not engaging in hyperbole or just driven by knee jerk reaction to constant criticism of his record in human rights both as president and as mayor of Davao City. He meant it.

“P…tang…in,” Duterte would blurt out repeatedly to display irritation at being constantly reminded that his methods in fighting the drug trade and crimes came at the expense of human rights.

Not even reminders that human rights is instilled in the 1987 Constitution, by which Duterte swore when he took his oath as president in 2016, would soften the toughie leader’s rhetoric.

The Constitution was clear that the State “values the dignity of every human person and guarantees full respect for human rights.” There could not be another interpretation of that.

But in the last five years, Duterte’s rhetoric, according to critics and human rights monitors, not only disregarded human rights as a key element in a nation’s progress but as a mandate inscribed in the highest law of the land—the Constitution.

Human rights, in the Philippine setting, is often just an afterthought in cases of killings, torture or deprivation that are so shocking they land in the news. Human rights has not been viewed as essential to the push for the Philippines to achieve the status of developed from developing country.

That human rights is always weighed against peace and order or national security was on display again on Thursday (Dec. 9), eve of International Human Rights Day on Friday (Dec. 10). On Thursday, the Philippine Supreme Court (SC) ruled in favor of the Anti-Terrorism Act except for two provisions of the highly controversial law that allows prolonged detention of terror suspects without charge and arrests without warrant on several grounds.

The SC flagged a qualifier in the law’s Section 4 which the high court said was too broad and violative of basic rights and also flagged a provision in Section 25. Both were considered unconstitutional.

The law, which was enacted in 2020, lit fear of massive rights violations in a country already reeling from impunity. Groups said the law carried “deadly consequences.”

She said the law was “set to worsen the already dismal human rights situation,” saying under Duterte, the Philippines had once again become a “killing field.”

This year’s remembrance of the 73rd International Human Rights Day is the sixth and last one under the Duterte administration that was marked with “systematic violations of people’s rights”, said Palabay.

She said under Duterte the Philippines plunged into a “deadly crisis” as the populist leader paved the way for “democratic backsliding and the revival of the worst horrors” last seen during the Marcos dictatorship.

The last five and a half years was filled with “state terror, violence and repression,” Palabay said, with the government leaving “thousands of dead.”

According to Palabay, this was made possible by Duterte’s attack on writers and press freedom, failure to curb corruption, neglect of people’s welfare and dragging of civilian agencies into the counterinsurgency campaign through the National Task Force to End Local Communist Armed Conflict (NTF-Elcac).

As this year’s celebration will be the last under the Duterte administration, INQUIRER.net looks back at human rights issues that drew attention in the Philippines since Duterte became president in 2016. 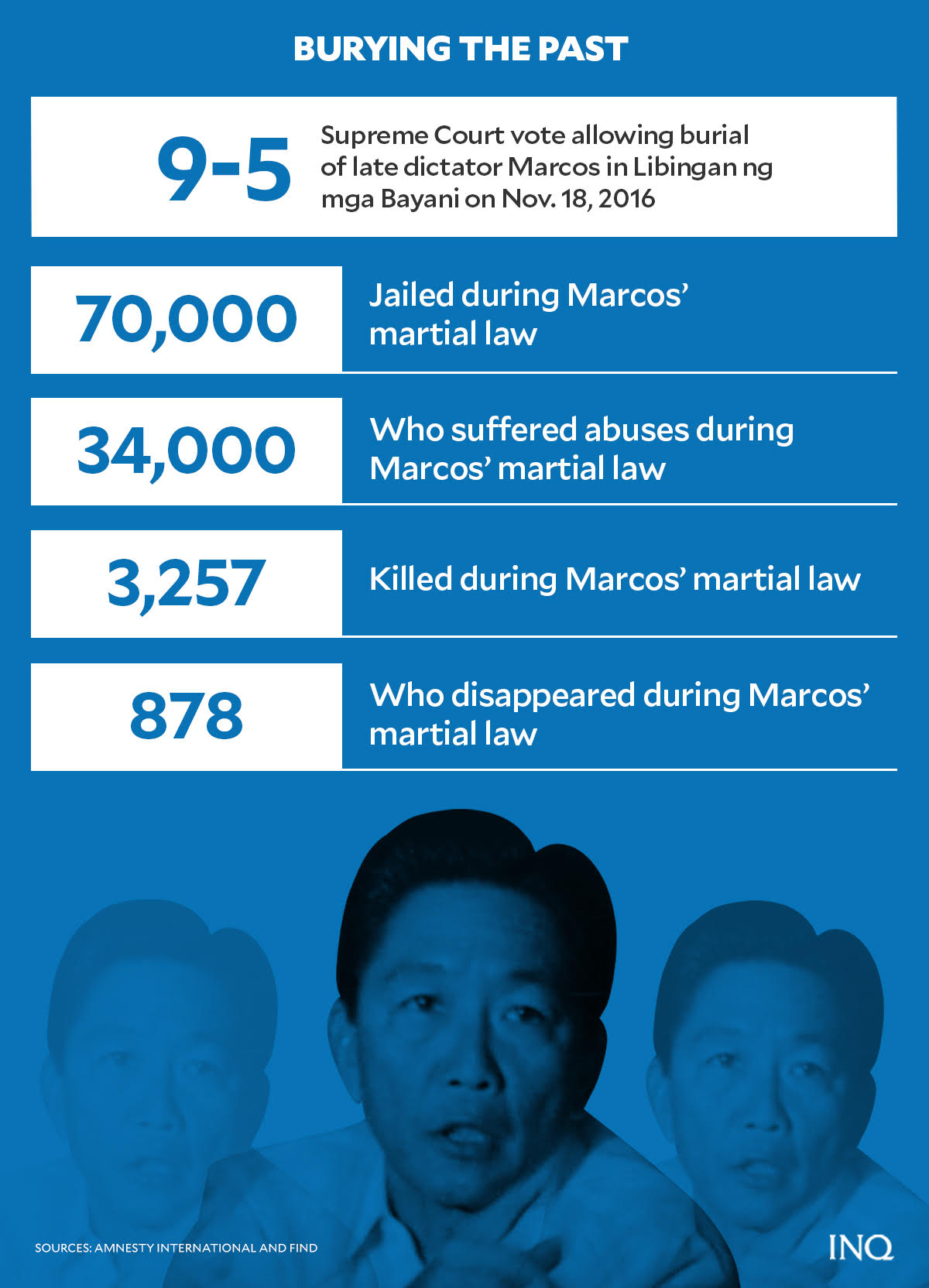 In 2016, as Filipinos marked the 68th International Human Rights Day, the spotlight fell on abuses committed during martial law and the more than 20-year reign of the late dictator Ferdinand Marcos.

This was spurred by the secretive work that laid the ground for Marcos’ burial at the Libingan ng mga Bayani, a graveyard for Filipinos who devoted and gave up their lives for their country,

The Marcos burial pushed through on Nov. 18, 2015, just months after Duterte assumed office, “like a thief in the night,” according to groups and victims of martial law.

The way was cleared by a 9-5 Supreme Court vote rejecting a petition to stop the burial and Duterte’s order allowing it.

Protesters parted the curtains on martial law. According to Amnesty International and the group Families of Victims of Involuntary Disappearance (FIND), 3,257 people were killed during Marcos’ rule. At least 34,000 people had been tortured. Some 70,000 had been jailed without charge and 878 had disappeared.

Martial law rose from the ashes again in 2017 when Marawi City was attacked by Islamic State (IS) followers who planned to turn the only Muslim city in the Philippines into an IS caliphate. To quell it, Duterte declared martial law in the whole of Mindanao on May 24, 2017. 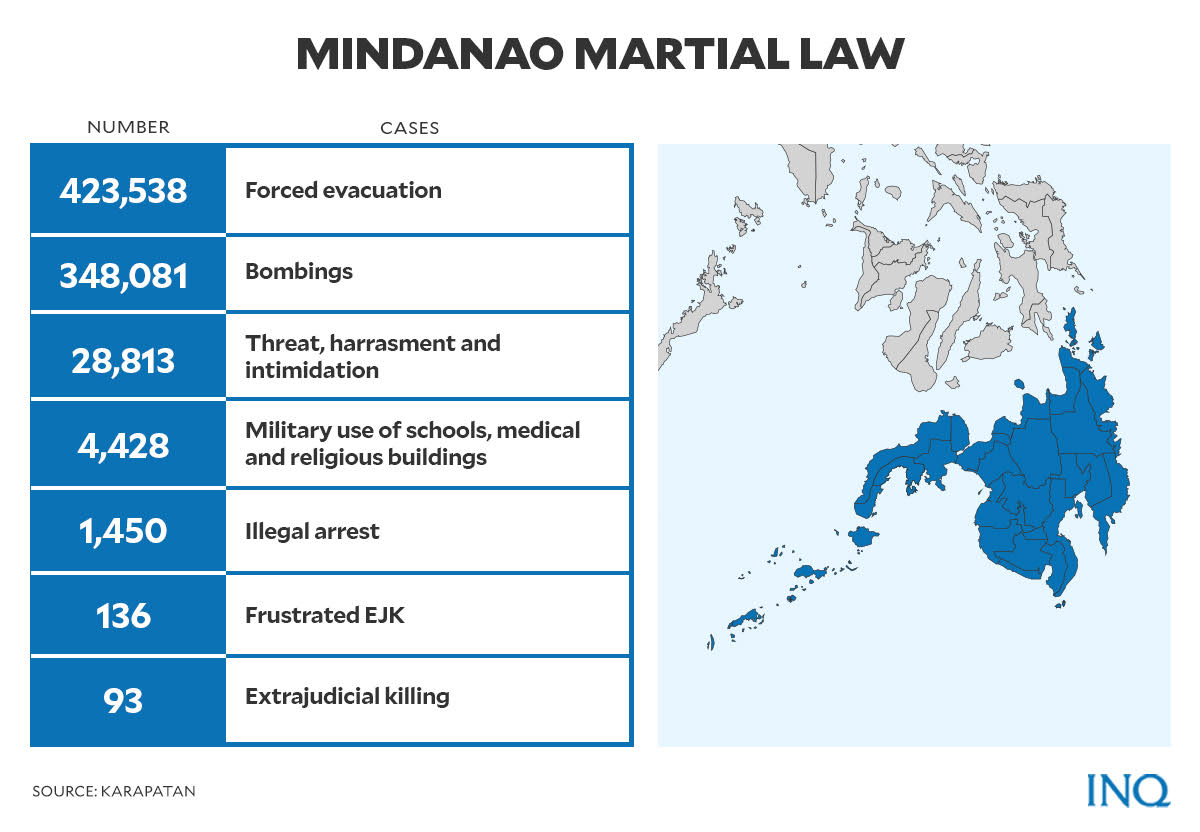 Martial law lasted for more than two years and was lifted on Dec. 31, 2019 with an indelible impact—cases of human rights violations.

Karapatan said from May 23, 2017 to May 23, 2019, it was able to document 815,734 violations of civil and political rights during martial law in Mindanao, saying Duterte’s version of it had “little to no checks and balances and is the real threat to public safety.”

During the two years of martial law in Mindanao, Karapatan said 93 people were killed, 136 escaped death, six disappeared, at least 1,450 were illegally arrested, 35 were tortured, at least 28,813 were threatened, harassed and intimidated.

READ: Martial law in Mindanao: What changed, what didn’t—and at what cost

The group said it also documented 4,428 victims of military use of schools, hospitals and churches. At least 423,538 fell victim to forced evacuations and 348,081 fell victims to bombings either by suffering injuries or losing homes.

The killings committed in the government’s campaign against illegal drugs have been highlighted since 2016, the year when Duterte launched the campaign with a promise to end the drug menace. “Give me three to six months,” he said. 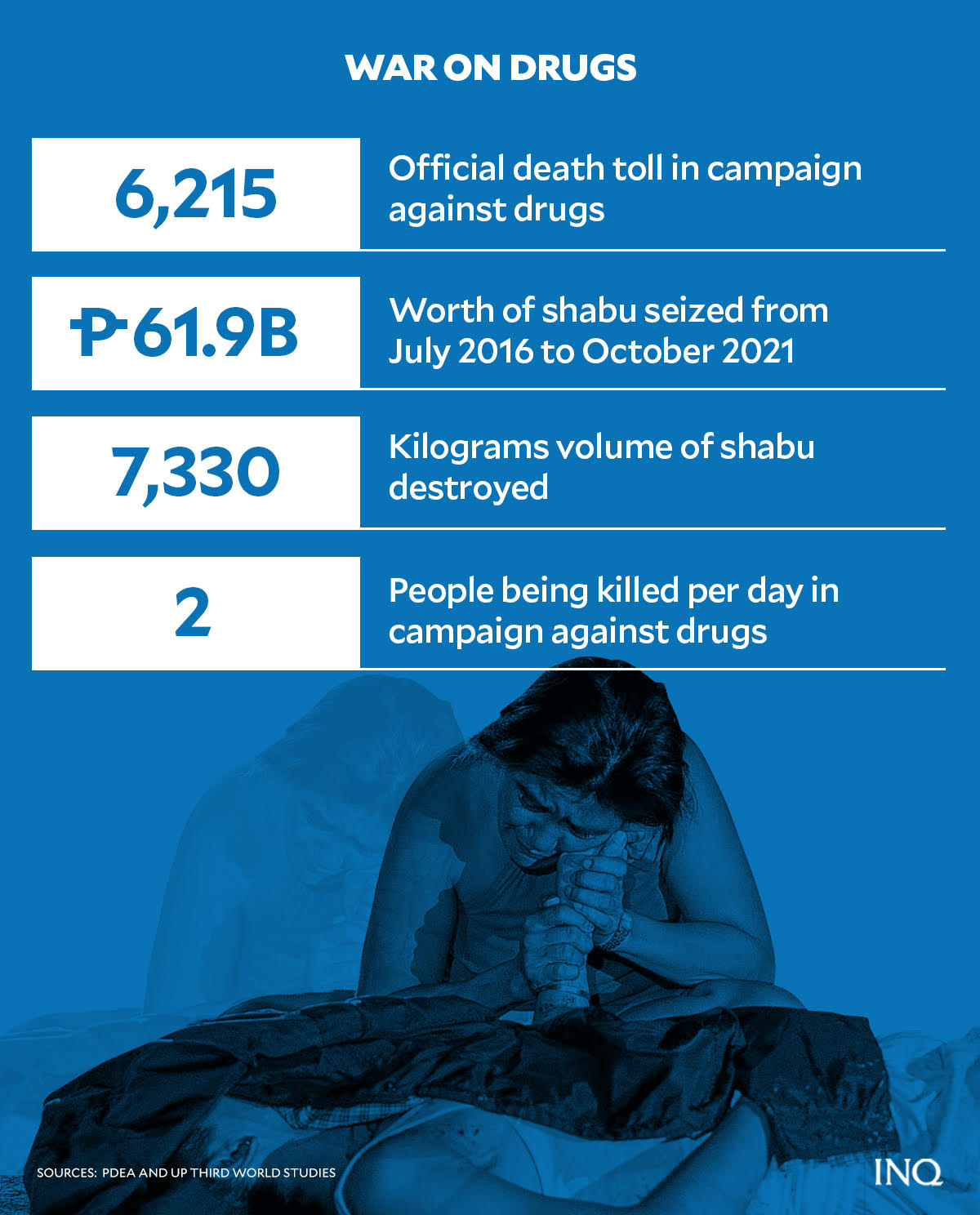 His war, however, saw thousands of people killed in police and vigilante-style killings—which the International Criminal Court said will be investigated as the “specific legal element of the crime against humanity of murder” appears to have been committed.

The University of the Philippines Third World Studies Center said since 2016, the government’s war on drugs has been claiming the lives of at least two people per day.

In 2020, five years into the war, the United Nations Office on Drugs and Crime (UNODC) said crystalline methamphetamine, or shabu, remained to be the main drug being used in the Philippines. The killings appeared to be for naught.

Since 2016, the Duterte regime has also removed the distinction between the underground and above ground Left and ordered attacks on both combatants and noncombatants.

Targeted were farmers, indigenous peoples and government employees on the basis of mere suspicion of involvement in the communist rebellion. 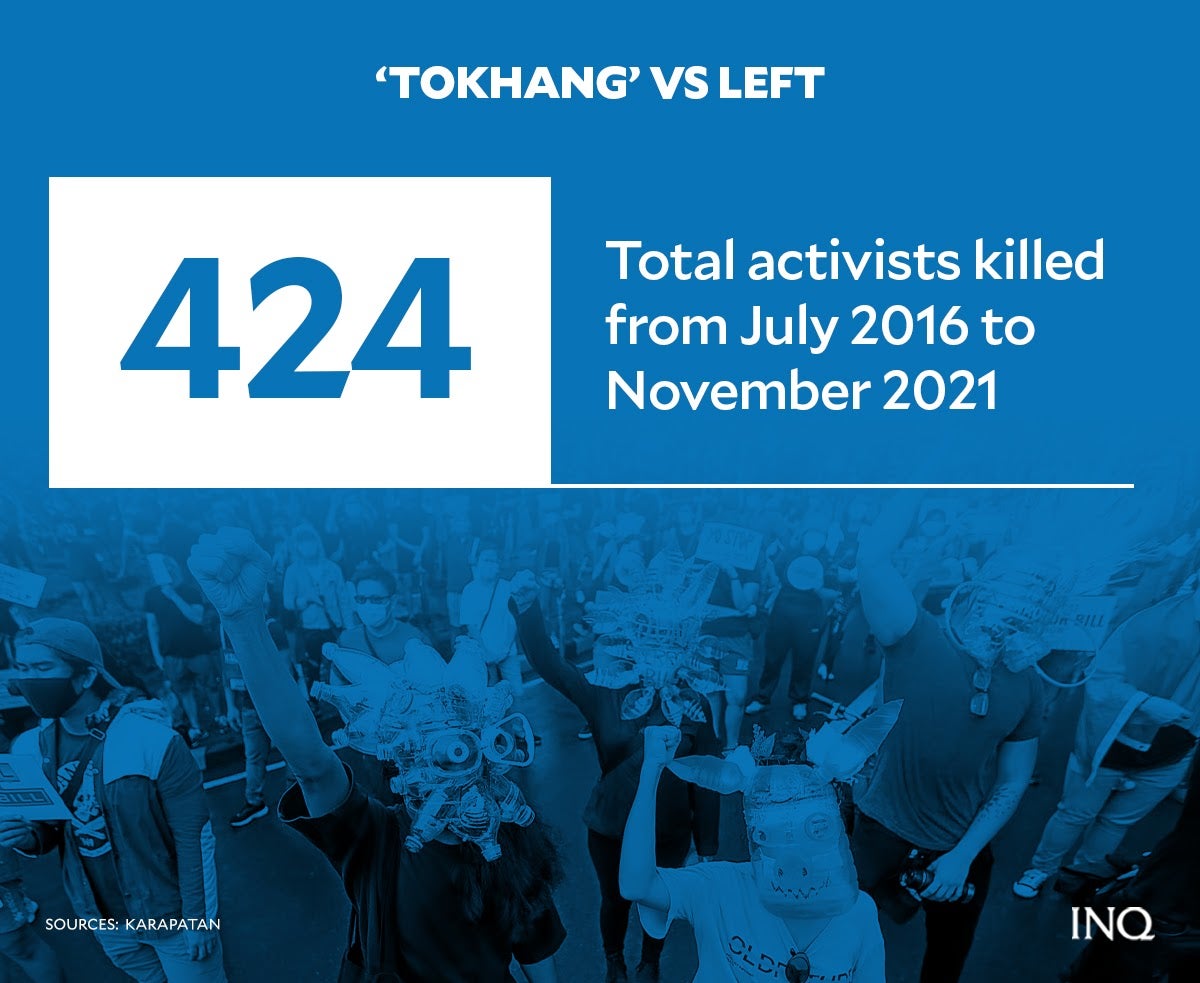 It said 1,159 people had been illegally arrested and detained. At least 575,139 people had fallen victims to threats, harassment and intimidation. The cases included red-tagging or vilification of activists as terrorists.

In 2017, through Proclamation No. 360, Duterte, breaking the “promise of peace,” asked the Presidential Adviser on the Peace Process to stop negotiating with the National Democratic Front of the Philippines (NDFP). 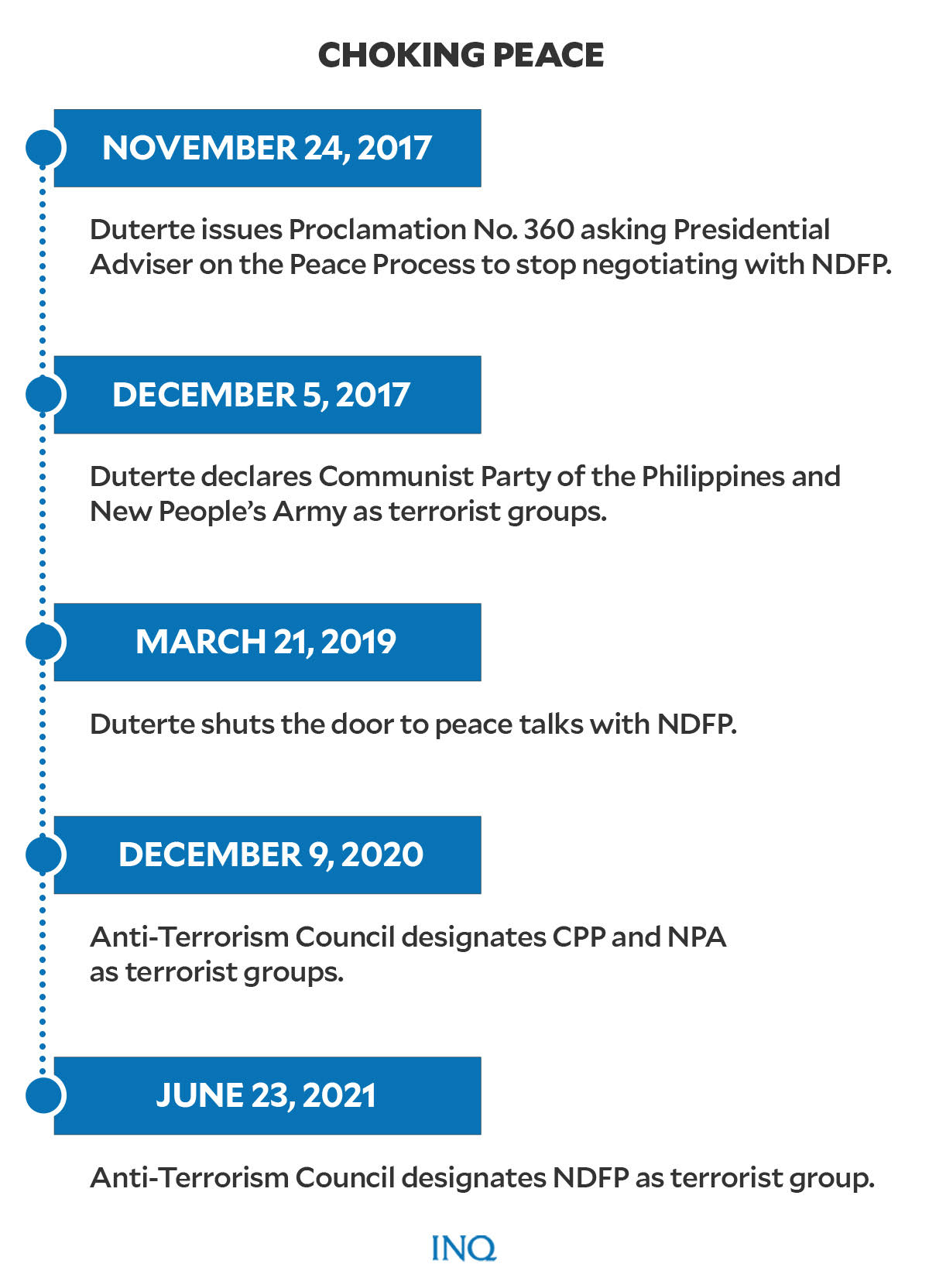 Karapatan said from July 2016 to November 2021, 15 peace consultants were killed, including Randall Echanis and Randy Malayao. It said one went missing while 11 were arrested, including Vicente Ladlad and Rey Casambre.

Duterte declared the Communist Party of the Philippines (CPP) and the New People’s Army (NPA) as terrorists in 2017 years after gaining popularity as a negotiator for the release of rebel captives. Two years later, Duterte shut the door to peace talks with the CPP, NPA and NDFP.

In 2020, armed with the Anti-Terrorism Act, the government, through the Anti-Terrorism Council created by the law, declared communist rebels as terrorists. In June 2021, NDFP, the umbrella organization of underground activists and rebel groups, was declared as a terror group.

The International Human Rights Day marks the day when the United Nations General Assembly, in 1948, adopted the Universal Declaration on Human Rights which lists human rights that should be “universally protected”. This has been translated into over 500 languages.

The website Human Rights Careers, highlighting the Universal Declaration on Human Rights as the “standard for basic equality and human dignity,” listed the reasons human rights is important.

In a study, the non government group Center for Economic and Social Rights (CESR) based in New York and Johannesburg said human rights is not just an idea but a necessary ingredient in progress for nations and peoples.

“Many of the key determinants of inequality can be framed as manifest denials of internationally guaranteed human rights,” CESR said in the study.

According to the anti-poverty group Oxfam as quoted by CESR, disregard of human rights “perpetuates poverty and social exclusion which, in turn, are key drivers of conflict and insecurity.”

In a study titled “Human Rights and Economic Growth”, the Danish Institute of Human Rights investigated the role of freedoms and participative rights in economic growth.

It found that human rights have a positive impact on economies.

Dr. Ronald Mendoza, dean of Ateneo School of Government, said in an opinion piece published in the magazine Diplomat that rule of law, of which human rights is a key component, is essential for economic development.

Quoting a study made of 165 countries from 1977 to 2013, Mendoza said states that are tagged by United Nations Human Rights Council as human rights violators suffered a 49 percent drop in foreign direct investments (FDI), which create jobs and factories.

The study, according to Mendoza, found that “bad human rights records of a state itself also leads to FDI loss.”