Interview with Dr. Chandu Claver: On Indigenous Peoples in PH and Canada 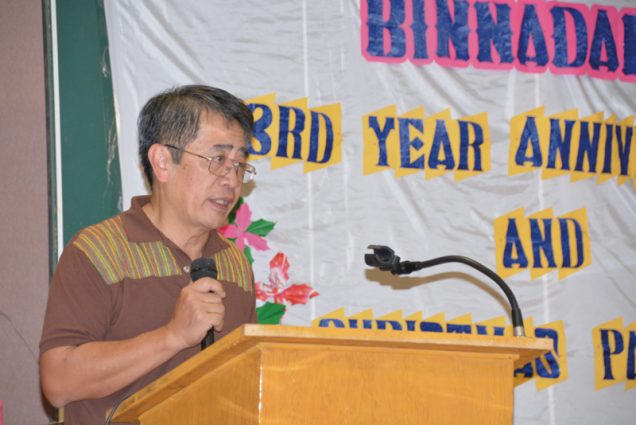 For an earlier issue (June 11 to 24, 2021), The Philippine Reporter spoke to him at length to help the Filipino community in Canada understand Indigenous Peoples in Canada and the Residential Schools.

Owing to the vast insights and experience he shared as an Indigenous Filipino, this second story — in the form of a Q&A — will delve into the history of Philippine Indigenous Peoples and what they share with Indigenous Peoples of Canada, particularly on the fight to keep their heritage and lands.

Dr. Claver urges immigrant Filipinos to look back at their colonial history to understand Indigenous Peoples in Canada.

His messages will hopefully be valuable especially to the new generation of Filipino-Canadians.

The Philippine Reporter (TPR): Please tell us something about your being an Indigenous Filipino.

Dr. Chandu Claver: Both my parents come from the Bontoc and Igorot tribes. We number around 1.2 million people based on our ancestral lands in the Cordillera Region in the northern Philippines. … Igorot is a collective name for many of the people of the Cordillera … comprised of several ethnolinguistic groups.

TPR: Why should the Filipino immigrant community try to understand about Indigenous Peoples in Canada?

Ano nangyari sa iba? [What happened to the rest?] The Igorots, the Lumads, the Moros? What happened was they resisted assimilation … When the Spaniards came, they resisted by retreating to the more difficult terrain — the mountains and deep forests. In the face of the great military strength of the Spaniards, these Filipinos retreated to the mountain vastness and the forest, and tried to defend themselves from the invasion of these foreigners; they resisted assimilation.
When you fast track now to the modern times, you now have Indigenous Peoples who are now assimilated into the mainstream culture — whether it’s Spanish or American [i.e.,] Western culture. So, we have now the mainstream Filipinos who were previously Indigenous but now have been assimilated into the modern Western culture. But there also remained other Filipinos who have resisted assimilation and exist with their culture up to now. [These are] the Igorots, the Aetas, the Moros and the Lumads — just to mention a few.

In Canada, we have a colonial power that came to Canada and tried to assimilate the Indigenous People, the original people who were living in Canada. The difference though between the Philippines and Canada was in the way that they were assimilated. Residential Schools were done in order to forcibly … accelerate the assimilation of the indigenous People into the modern Western culture. But the First Nations, the natives resisted.

We, the Igorots, for example, the Lumads, the Moros in the Philippines are very similar to the First Nations because they do resist … they try to resist assimilation. They’re willing to live in the modern ways, but they both have a history of resisting assimilation from their culture.

Kung tutuusin natin, [come to think of it] … any Filipino who comes to Canada should remember that we were … once previously Indigenous. What you are seeing here in Canada are Indigenous People who have resisted assimilation, and, in the process, they have been really parang [like] severely attacked. There was an attempt to forcibly remove their culture from their individual spirits. It has been attempted with the Residential Schools.

Those are things that Filipinos should contemplate and remember. Because if you start remembering that you will now see a connection [to what happened in Residential Schools]. I think a lot of Filipinos do not want to think that way. Because even in the Philippines a lot of mainstream Filipinos still look down on Indigenous Peoples. … They look down on the Igorots, they look down on Lumads and the Moros. That’s not right, but … I understand that there is a lack of understanding. And that is where we should be focusing: people who are more enlightened should start giving education with regards to that.

Why did the colonizers try to force to assimilate [Indigenous Peoples]? In the case of the Philippines, … [this is] because Indigenous Peoples live in very rich natural resource-based areas. These areas are very rich. There were a lot of military expeditions … [for the king of Spain] to conquer the Cordillera … for the gold.

After the feudal system of the kings comes a capitalist system wherein the needs of capitalist production become more – iron, metal, hydropower, timber. These areas of Indigenous Peoples are valuable. When capitalism was in full swing in the late-1800s and into the 1900s, there was a drive to actually get all those resources. That was the reason we have American mines in the Philippines since the 1900s.

Here in Canada, it’s the same. The reason they [colonizers] tried to assimilate forcibly was that they really want their [Indigenous Peoples] resources. … The difference between the Philippines was we were conquered before capitalism. However, with Canada, the growth of capitalism was already in its beginnings. When the colonizers invaded [Canada] there was a need to fast track things, meaning forcing people, and that, in my personal opinion, is the one thing that could have pushed the idea of doing Residential Schools — to accelerate assimilation.

TPR: And in recent times there are also companies in the Philippines who are there for the same reason — to grab the resources from Indigenous Peoples? (For background information on Canadian firms’ alleged human rights violations in the Philippines, please see the previous story on ‘We eat death, rape, threats for breakfast every day’ on May 28 to June 10, 2021 issue of The Philippine Reporter)

DCC: In the Philippines, there is a struggle between the Indigenous Peoples and the system. Indigenous Peoples have now recognized that they are under attack because of their resources, and they want to defend [their land] because that is their ancestral land.

That is why they [the state] have never wanted to give [land] titles to the people living there. From the time the Americans came in 1900 to the time the Americans left, the practices have continued in the different Philippine republics — to keep indigenous lands as public lands. From 1960s up to now, Indigenous Peoples in the Philippines have been fighting … and they have had advances because of their resistance as well as advocacy. They’ve had also victories.

For example, they were able to enshrine in the 1987 Philippine Constitution that Indigenous Peoples, especially the Igorots [in the north] and the Moros in the south [of the Philippines], have the right to self-determination. … But the Philippine state has tried time and time again to delay or to lessen the interpretation of the Constitution by coming up with irrelevant law. Any law that they come up with is kulang [not substantial]. They actually came up with The Indigenous Peoples’ Rights Act [of 1997], but that falls short because it does not give IPs control or management of natural resources in those lands. Because that is what the state or the system doesn’t want to give up – their control of the resources. Unlike in the lowland areas you have the right to the land you claim by title.

Indigenous peoples struggle to preserve themselves. Because once mainstream or capitalism or government destroys the land, you now are destroying the basis of culture. … Anything that supports life is in the land – the trees, the water, the air, anything underground — all of those support lives. They support the existence of the people living on those lands. That is indigenous worldview

Contrast that to the capitalist worldview which looks at resources in compartments. A logging company looks at the trees as trees alone. When they cut the trees, they do not see that it actually destroys the land by reducing water retention. … The mining companies look only at the minerals. They do not care if your open pit starts to have effluents that destroy the water that kills the rivers.

TPR: What’s your message to Filipinos who may not know about Indigenous Peoples in the Philippines and Residential Schools?

DCC: The thing is migrant Filipinos came here for only one reason — economic reason. It is natural for people to say: ‘Why do I have to learn that the problem [with Indigenous Peoples]?’ I say, you are living in a society … where there’s a lot of issues in this country. … It is selfish to think only about you and yourself without thinking about why you came here and why you chose Canada. … We should also remember that Indigenous Peoples are part and parcel of that society … It’s the same when you’re in the Philippines.

The Igorots, Lumads and the Moros have an issue that affects you because you are living in a system that tries to justify the repression of these people. And if you say ‘Wala akong pakialam dyan [I don’t care],’ you’re actually contributing to their repression. You benefit from that repression. Part of the material benefits you have come from the repression of Indigenous Peoples.