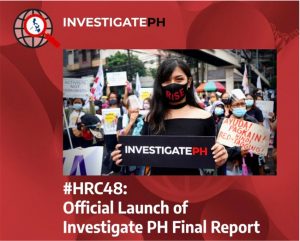 INVESTIGATE PH released its third and final report on Monday, September 13, that examines the intensified human rights crisis and widespread violence in the Philippines under the Duterte administration.

The launch of the third report coincided with the 48th Regular Session of the UN Human Rights Council (UN HRC), and it focuses on violations of economic, social and cultural rights, the right to development, self-determination and peace, and the harsh impact of the COVID-19 pandemic.

“We urge the international community to increase the pressure on the Philippine government to correct the serious abuses we and others have been exposing,” Patricia Lisson said.
Lisson is a member of the Investigate PH Core Working Group and the chairperson of ICHRP Canada.

The first report demonstrated the intensifying political repression and raised alarm at the lack of domestic remedies to address abuses, and the second report spotlighted State terror in the Philippines: a War on Poor People in the guise of anti-drug operations, a War on Dissent, and a War on the Moro People.

“It showed how the Duterte government was breaching international humanitarian law by failing to discriminate between civilians and combatants in the conduct of military operations,” Lisson said.

“The Supreme court of the Philippines took some action to reign in abuses of judicial processes uncovered in our initial report. We are encouraged by these developments and we know they have given many Filipinos hope that they may see justice.”

Four panellists were present during the North America launch. Reverend Doctor Susan Henry-Crowe, General Secretary of the General Board of Church, spoke about the rights of children, the right to education and freedom of religion which have all been attacked by the Duterte government.

“Duterte’s budget boosts spending on the security forces and cuts spending on welfare, housing, education and health,” Henry-Crowe said. “This really hurt the people and especially during the pandemic.”

“As this issue relates to children and youth, we have seen stories of over 122 children that have been killed in the war on drugs in 2019. It will be even higher now.”

Attorney Jeanne Mirer of the International Association of Democratic Lawyers talked about the violations of economical, social and cultural rights.

“The commission found in the report that the Duterte government’s neoliberal economic policies violate the rights contained in the economic rights including the right to a job and livelihoods of peasants, workers, migrant workers, and women,” Mirer said.

The resources are misallocated and put into militarization rather than public health response to the COVID-19 pandemic. The Philippines has the lowest relief package during the pandemic in all of Asia.

“Despite several severe economic hardships during the pandemic, Duterte has cut social services while increasing the spending on armed security forces,” Duncan said.

The Anti-Terror Law of 2020 has become Duterte’s main instrument to implement his counterinsurgency program to vilify activists and their organizations and to criminalize dissent.

Attorney Suzanne Adely of the National Lawyers Guild highlighted a few recommendations by INVESTIGATE PH and its commissioners to the government of the Philippines and the international community.