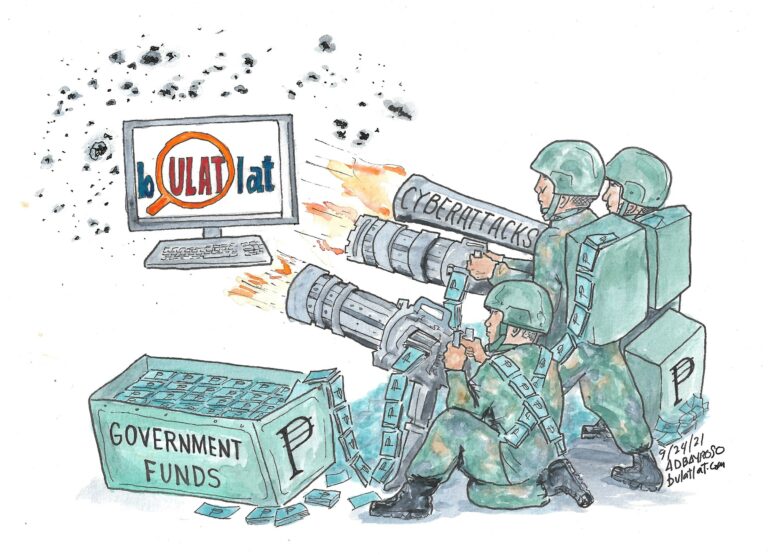 MANILA – A group of Filipino IT experts belied military claims that they were merely browsing through the websites of independent media outlets.

In a statement, the Computer Professionals’ Union (CPU) said that what Armed Forces of the Philippines Spokesman Ramon Zagala described as “mere surfing” is more “like a targeted attempt to significantly disrupt a crucial platform and curtail freedom of the press.”

Earlier, Sweden-based Qurium Media Foundation’s investigation showed that an IP address publicly registered to the Department of Science and Technology conducted a vulnerability scan on Bulatlat after one of the DDoS attacks. The IP was traced to the Philippine Army, and DOST, as per the CERT-PH August 11, 2021 report, confirmed that the said IP was assigned to the Philippine Army.

The military has since denied their involvement, saying that they respect freedom of expression. However, CERT-PH’s attempts at investigating the cyber-attacks did not prosper as they were not able to establish “coordination with the organization currently using the said IP,” referring to the Philippine Army.

This has resulted in the classification of the CERT-PH findings as “TLP: Amber,” which meant that information is restricted to involved parties. However, both Bulatlat and AlterMidya, in their earlier statement, found it necessary to publish the findings as these are of public interest.

“Attacks on alternative news outlets is an attack on the press and we call on everyone to resist all attempts to snatch from us the freedoms we have fought for,” the group said.

Under the Duterte administration, cyberattacks have been repeated launched against alternative news outfits, which have also been subjects of red-tagging and harassment.

Read: What you need to know about the ongoing cyber-attacks vs. alternative news Bulatlat

In a statement, the National Union of Journalists of the Philippines (NUJP) said it is concerning that the Philippine Army did not respond to the government’s own investigation when it denied involvement in the cyber-attacks.

“Government agencies have always emphasized bringing complaints to the proper forums and through the proper procedures,” said the NUJP, “it is doubly frustrating, then, that attempts at accountability through the processes they prescribed get only a denial, or, worse, silence.”

Information crucial to people’s sovereign will

In a separate statement, the Freedom for Media Freedom for All also criticized the cyber-attacks against the websites of the two news outfits, saying that they are joining their voices “in the collective resistance of these violations of Constitutionally-protected rights.”

The media coalition also urged the Philippine Army to demonstrate their respect for a free press both in words and in deeds.

“Information has always been crucial to the exercise of the people’s sovereign will that is the core of a democracy. A free press must provide a diversity of views so that society can engage in the decision-making process, debate, and argumentation that is crucial to good governance,” said the media coalition.

Members of the coalition are the NUJP, the Center for Media Freedom and Responsibility, Philippine Center for Investigative Journalism, MindaNews, and the Philippine Press Institute.

The group added, “since the military by its function is not a repository of democratic values, we call on our soldiers to cease forthwith this insidious campaign to silence media and its members, to limit citizen access to views and perspectives that may differ from those held by the government in power.”