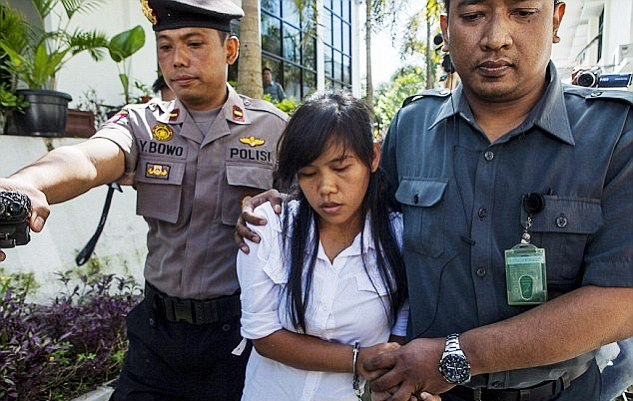 President Ferdinand Marcos Jr. is set to make his state visit to Indonesia from September 4 to 6

MANILA, Philippines – Ahead of President Ferdinand Marcos Jr.’s state visit to Indonesia, the parents of long-detained overseas Filipino worker Mary Jane Veloso appealed to the chief executive to negotiate with Indonesian President Joko Widodo to grant clemency to their daughter, who has been on death row for 12 years in Indonesia over drug-related crimes.

On Friday, September 2, Mary Jane’s father Cesar Veloso traveled from their home province Nueva Ecija to the Department of Migrant Workers (DMW) in Mandaluyong City to personally drop off a letter addressed to Marcos to make the appeal.

Marcos is set to make his state visit to Indonesia from September 4 to 6.

In their letter, Cesar Veloso and his wife Celia said they were thankful that the Indonesian government suspended her execution in 2015 following a last-minute plea from the Philippine government.

(But we will be more thankful if our daughter, Mary Jane, is brought home in the soonest time because she is innocent, and her only intention was to go abroad to give her children a decent life.)

Celia was supposed to accompany Cesar, but she fell sick en route to the city, and had to be brought back home. Cesar brought the letter and spoke to media for both of them.

In April 2010, Mary Jane arrived in Yogyakarta, Indonesia, after her recruiter, who originally offered her a job in Malaysia, told her to go there instead. The recruiter, Ma. Cristina Sergio, gave her a brand new suitcase and some cash. Once Mary Jane arrived in Yogyakarta, Indonesian authorities found packs of heroin hidden in the lining of the suitcase.

After a brief trial, prosecutors asked the Indonesian court to sentence Mary Jane to life imprisonment in October 2010. But the judges handed down the death penalty.

Less than a day before Mary Jane was scheduled for execution in April 2015, Sergio turned herself in, and Mary Jane’s execution was suspended. Then-president Benigno Aquino III requested Indonesia to turn Veloso into a state witness. (READ: Aquino ‘broke protocol’ to save Mary Jane Veloso)

Cesar told reporters on Friday that Mary Jane was safe. He recalled her telling him in a call: “Tatay, huwag ‘nyong pababayaan ang inyong mga sarili, dahil alam ko po na ang Panginoon ay tumutulong sa atin. Alam ko po na magsasama-sama tayo.” (Father, take care of yourselves, because I know the Lord is helping us. I know that we will be together again.)

(We are one [with the Veloso family] in this situation…. Our primary mandate is to take care and protect the interests of our migrant workers, regardless of their status, all over the world. And we recognize the particular situation that Mary Jane is in.)

Nebrida said the DMW was not the “front agency” in lobbying for clemency in the case, but that the department would work with the Department of Foreign Affairs (DFA) to monitor Mary Jane’s situation.

“We vow to bring this letter to President Ferdinand Marcos Jr. We will relay your message, Tatay Cesar, so that it can be made part of the main points of discussion when he visits Indonesia,” Nebrida said in Filipino.

Migrante International chairperson Joanna Concepcion, who accompanied Cesar in giving the letter on Friday, said that the President must raise Mary Jane’s case as a priority issue with the Indonesian government. Migrante called on Marcos to appeal for clemency through humanitarian grounds, amnesty, pardon, or any means to allow Mary Jane to come home.

“During President Marcos Jr.’s first State of the Nation Address speech, he mentioned the government’s campaign against human trafficking. If he is truly genuine in his commitment to combat the problem of human trafficking, he should exert all efforts to appeal to President Widodo to release Mary Jane under humanitarian grounds,” said Concepcion.

Concepcion also credited the saving of Mary Jane’s life to her parents’ courage, the OFW’s pro-bono lawyers in the Philippines and Indonesia, and the international lobbying from migrant and women’s rights advocates. But Mary Jane remains on the death row, which is why her execution may still push through.

Marcos will not go straight back to the Philippines after his visit to Indonesia. From September 6 to 7, he will make his state visit to Singapore. – with a report from Bea Cupin/Rappler.com