Pacquiao: Do not forget the atrocities during the Marcos regime 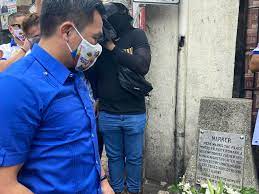 CEBU CITY, Philippines — Presidential aspirant and incumbent Senator Manny Paquiao said Filipinos should not forget the atrocities that were committed during the martial law years and the Marcos regime.

Pacquaio made the statement on Thursday, October 28, 2021, in an ambush interview right after the wreath laying-ceremony at the marker in Barangay Tisa, Cebu City where Redemptorist priest, Fr. Rosaleo “Rudy” Romano, was abducted.

(We cannot forget what happened because like a wound it leaves a mark. Even if the wound will heal, a mark will still remain. So we should not forget, we should remember that we should respect each other’s rights.)

The presidential aspirant, however, said that his visit at the commemorative marker of Romano was nothing personal against the Marcoses and the Dutertes.

He said the message there was to fight the right of freedom of speech for the Filipinos, where everyone could freely speak what would be in their hearts without being hindered.

“Nothing personal but ang karapatan ng tao ang pinaglalaban natin dito, karapatan ng bawat isa na malaya tayo na makapagcomment na maihayag natin yung saloobin natin,” said Pacquiao, stressing that it just happened that he was going to a grandmother who will be celebrating her 101st birthday in southern Cebu, which was why they passed by the commemorative marker and offered flowers.

(It’s really nothing personal, but what we are fighting is a person’s right, the right to freely comment what is really inside us.)

(Our message here is to respect each and everyone’s right, that each one has the right to say what is inside them and to freely live here in our country without any fear.)

The event reportedly aimed to remind the Filipinos, particularly the Cebuanos of the ‘atrocities that were committed during the martial law years of the Marcos dictatorial regime.

He was joined by former Cebu Provincial Board member Ribomafil “Joey Boy” Holganza Jr., PDP-Laban Pimentel-wing Central Visayas chairman, and his group of supporters, the Manny Pacquiao for President Movement (MPPM) in his visit at the commemorative marker.

Other supporters also flocked near the area upon learning that Pacquiao was set to visit the commemorative marker, causing a bit of traffic there.

Holganza recalled that while Romano was spared from arrest during martial law, but he was later abducted by armed men, who were believed to be members of the military at the corner of San Jose and Katipunan streets in Barangay Tisa sometime in June 11, 1985.

Romano, who was believed to be a staunch critic of the Marcos regime and a human rights defender, particularly for the poor and oppressed, was never found after the incident.

Holganza, along with his father, the late Ribomafil “Dodong” Holganza Sr., were reportedly among the political detainees that were arrested against their will during the presidency of the late Ferdinand Marcos Sr.

The PDP-Laban regional chairman emphasized the importance of the wreath-laying ceremony with the presence of Pacquiao, saying that it would be an added injustice to the survivors, including him, and other affected families of the Marcos regime ‘with the attempt to rewrite history.’

Visiting the commemorative marker of Romano was just among his itineraries in Cebu.

Prior to his visit at the marker, Pacquiao reportedly held a meeting with the officers and members of MPPM at their national headquarters in Lapu-Lapu City.

He also met with senatorial aspirant Raffy Tulfo in Lapu-Lapu City. Pacquiao said he would attend the birthday celebration along with Tulfo after the wreath-laying ceremony.