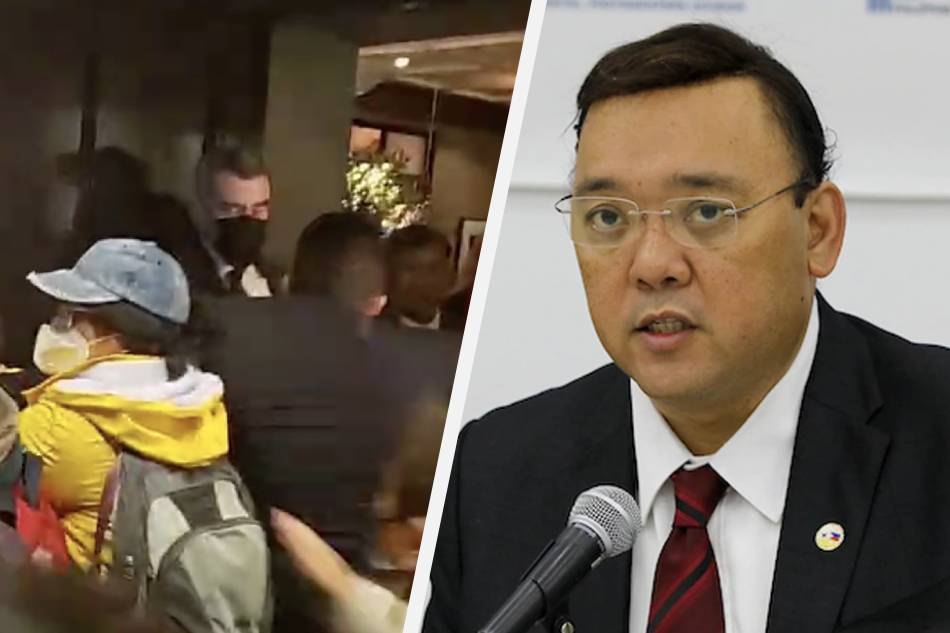 MANILA, Philippines (Updated 2:07 p.m.) —  A protest erupted at an upscale restaurant in New York City to object to presidential spokesperson Harry Roque’s nomination by the Philippines to the International Law Commission over accusations that he “failed to uphold international law.”

Rallyists from Bagong Alyansang Makabayan – USA and its allied organizations staged a protest at Aretsky’s Patroon where Roque said he was hosting a private reception for representatives of several foreign missions in New York.

Protesters chanted “No justice, no peace, stop the killings in the Philippines!” and “Roque out of ILC!” as heard in a Facebook Live video by Bayan – USA.

“Harry Roque is a war criminal! He has no place joining the International Law Commission! We abhor everyone inside at the UN to dismiss his candidacy!” said one protester.

Another protester said, “He has failed to uphold international law! He has justified the killings of Filipino women!”

As they were blocked entry into the dining area, protesters shouted, “How dare you protect a war criminal!” and proceeded to chant, “Shame!”

In a statement following the protest, Roque condemned the protesters for supposedly trying to “cause harm to innocent people.”

“The militant groups were not content to peacefully rally outside the restaurant, they charged upstairs, in the process injuring two elderly waiters, and causing damage to property,” he claimed.

He also claimed that the protesters ordered food and drinks from the restaurant but did not pay for them.

Bayan – USA denied Roque’s allegations, saying that he is just attempting to divert attention from the key issues they raised. They added that at least three protesters were injured by his security staff as they were “violently pushed down the stairs.”

“Protesters raised legitimate opposition to his candidacy in the ILC especially given his role in Duterte’s crimes, and Harry Roque, as presidential spokesperson and vying for a spot in the UN International Law Commission, must be held accountable for these crimes,” the group said.

A number of groups in the Philippines have voiced out their objection to Roque’s bid for a seat at the ILC, a United Nations expert panel that develops and codifies international law.

The ILC was instrumental in the creation of the International Criminal Court, which Roque has repeatedly tried to discredit amid its prosecutor’s ongoing investigation into the alleged crimes against humanity committed under the Duterte administration’s “war on drugs.”

Among the groups that have either signalled their opposition or have written to the ILC to object to Roque getting a seat at the commission are the Free Legal Assistance Group, the National Union of People’s Lawyers and the executive committee of the University of the Philippines.

Roque has dismissed opposition to his nomination as “bereft of legal merit.”

According to the ILC’s website, members serve in their individual capacity and not as representatives of their governments.

It also states that “[m]embers of the Commission are paid travel expenses and receive a special allowance in accordance with article 1348 of the Commission’s statute.” — with a report from Kristine Joy Patag