Scams competed for attention with pandemic in Senate’s busy 2020 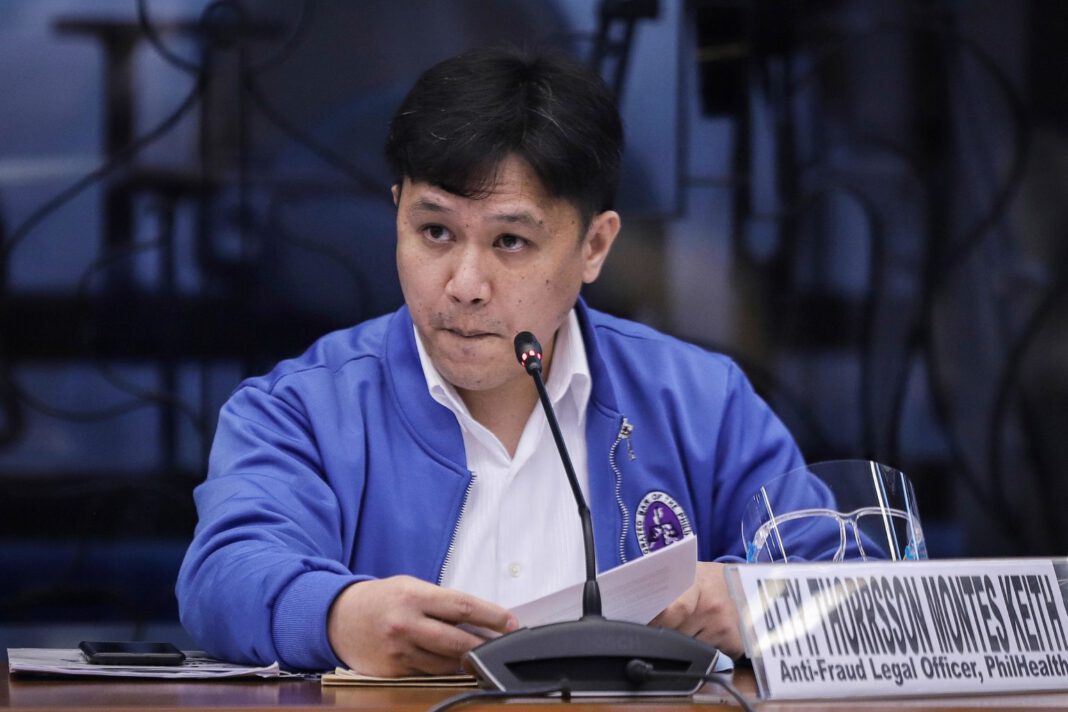 MANILA, Philippines—From unwrapping an immigration bribery scheme at the country’s main gateway, which has been christened pastillas scam, to digging into new reports of anomalies at Philippine Health Insurance Corp. (PhilHealth) that led to the resignation of its president, the Senate found 2020 to be not only the year of the pandemic but also of scandals.

The year 2020 not only was dominated by news about the pandemic, but also reports about irregularities that found themselves being unmasked in the higher chamber of Congress.

Pastillas is a local soft candy made out of milk, sugar, flour and eggs. It is usually wrapped in wafer-thin paper in different colors.

At the immigration section of the Ninoy Aquino International Airport (NAIA), however, pastillas has taken on a new meaning.

What started off as a Senate probe into sex trafficking linked with Philippine offshore gaming operators (Pogos) turned into the unraveling of a purported bribery scheme involving immigration officials and personnel.

The modus? Provide Chinese nationals, mostly Pogo workers, seamless entry into the country in exchange for P10,000 in “service fee” for each Chinese.

The investigation into Pogo-related sex trafficking, led by Senate women committee chair Sen. Risa Hontiveros, began in January. It was revealed that Chinese prostitution rings have emerged in the country and are operating online.

A few weeks after the first hearing, a bribery immigration scheme took the spotlight and became the center of the investigation.

This, after Hontiveros, citing an informant, exposed a system allegedly centralized by agency higher-ups.

“Somebody sold our country’s borders for Chinese money,” Hontiveros had said.

These “payouts” from Chinese nationals were purportedly distributed to immigration officers wrapped in bond papers and rolled, which gave them the appearance of pastillas.

The whistleblower eventually revealed himself in another hearing and recounted his story about the pastillas scam.

A few months later, another whistleblower, Jeffrey Dale Ignacio, surfaced in the Senate to testify on the immigration bribery scheme.

During the Senate investigation, Chiong and Ignacio corroborated each other’s testimonies and tagged former BI ports operation division chief Marc Red Mariñas as the “ringleader” of the scheme. Mariñas has since denied the allegation, claiming ignorance.

“I consider the ‘pastillas’ scam investigation one of the most controversial and revealing probes conducted in the Senate this year because we were able to present damning evidence about systemic corruption that cannot easily be denied. Corruption, unfortunately, is endemic to many of our institutions,” Hontiveros told INQUIRER.net in a message.

“However, our Senate inquiry proved that through the steely resolve of victim-survivors like Carina and Ivy, the courage of whistleblowers Alex Chiong and Dale Ignacio, the unrelenting work of law enforcement officers, and the cooperation of different government bodies, making corrupt officials and personnel accountable for their crimes is possible,” she added.

During the probe, Hontiveros had revealed that the “masterminds” of a “corrupt business model” in the immigration bureau have allegedly pocketed over P40-billion in kickbacks since 2017 by facilitating the entry of Chinese nationals through the so-called Visa Upon Arrival (VUA) scheme and the “pastillas” scam.

While her committee had an “inkling” that the rise of Pogos would eventually lead the Senate panel into scrutinizing the country’s immigration bureau, Hontiveros admitted that she did not expect the “depth and breadth of the corruption in our immigration bureau.”

“It was disheartening to know that our own officials essentially sold our borders and made our women and children vulnerable to abuse in exchange for grease money. Nonetheless, it’s been quite a relief to see that through our investigations, corrupt officials can pay for their crimes,” she further told INQUIRER.net.

After the Senate probe exposed the pastillas modus, the National Bureau of Investigation filed complaints against over 100 immigration officials and employees for alleged involvement in the bribery scheme.

The revelations in the inquiry also earned the wrath of President Rodrigo Duterte, who recently summoned suspended immigration officials in Malacañang for a “dressing down.” Unconfirmed reports said Duterte made the BI officials eat money in a gesture of rage.

Following the pastillas investigation, Hontiveros’ committee will now be zeroing in on another possible “revenue stream” at the country’s main gateway, this time involving the trafficking of Filipino women for prostitution abroad.

In July, Senate President Vicente Sotto III and Sen. Panfilo Lacson filed Senate Resolution No. 475 calling for the assembly of of the Senate as a committee of the whole to probe the alleged “rampant corruption, incompetence, inefficiency” in the PhilHealth.

The proposed investigation sought to look into the alleged overpriced procurement of IT equipment; the supposedly questionable release of billions of funds through the state-run firm’s Interim Reimbursement Mechanism (IRM) and the alleged manipulation of the corporation’s financial records.

During the first of three hearings on the issue, lawyer Thorsson Keith, the anti-fraud officer that resigned from the agency after the controversial meeting, describe the recent PhilHealth anomalies “crime of the year” that resulted in the loss of P15-billion of the state insurer’s funds, allegedly pocketed by members of the PhilHealth “mafia.”

The IRM is a funding measure to reimburse health care institutions to allow them to continue responding to a national emergency or calamity, such as the aftermath of Supertyphoon “Yolanda” in 2013 and the Marawi siege in 2017. This year, it is for the COVID-19 pandemic.

Health Secretary Francisco Duque III, who chairs PhilHealth board in an ex-officio capacity, was also dragged into the alleged anomalies and was tagged as the alleged “godfather” of the PhilHealth “mafia.”

The health chief denied this allegation.

“[A]bsolutely malicious and without basis. I don’t wish to dignify that allegation,” Duque had said.

After three separate hearings lasting a total of over 30 hours, the Senate Committee of the Whole, chaired by Sotto, came out with its report containing its findings and recommendations last September.

The committee recommended charges against Duque, former PhilHealth president Ricardo Morales and several other top officials for the alleged misuse of funds through the agency’s IRM.

Sotto told INQUIRER.net that the Senate’s PhilHealth investigation could be “one of the most controversial” this year since the irregularities were “unearthed when the country was experiencing a devastating health problem and yet the health officials involved were insisting that there was nothing injurious happening with the people’s money.”

An online post warning a young actress and a beauty queen against engaging with a progressive women’s group ignited backlash for a top military official and prompted a Senate committee to investigate what is now popularly known as red-tagging.

Sen. Panfilo Lacson, chair of the Senate defense committee, then called for an inquiry on the issue last November.

Parlade and the defense sector faced the Senate inquiry in “full force” and used it as a venue for accusations that the left-wing Makabayan bloc of lawmakers in the House of Representatives were involved in the underground communist movement.

The security sector had presented several alleged former rebels, who accused the progressive lawmakers of having links with the Communist Party of the Philippines.

Former and current Makabayan bloc lawmakers denied these accusations and cited the dangers of red-tagging.

“If you are red-tagged, of course you will become a target, you will be scared and you will opt to become silent. Red tagging is guilt by association with our accusers playing the role of judge, jury and executioner,” said former Bayan Muna Rep. Teddy Casiño at one of the hearings.

In the course of the investigation, some sectors criticized the conduct of the hearings, saying that it was being used by the military as a “venue for witch hunting.”

READ: Some Makabayan solons ‘disappointed’ with ‘terror-tagging spree‘ at Senate

Lacson, who led the probe, maintained that the investigation had been fair.

READ: ‘Burden of proof is on you,’ Lacson tells witnesses linking solons to CPP

He said both sides had been given equal opportunity to air sentiments and concerns.

Lacson said his panel will collate all testimonies and documents from both sides and “come up with our conclusions and recommendations in our committee report.”

The Senate inquiry also ignited discussions on criminalizing red-tagging, which Lacson said he was “seriously” considering but admitted that passing such a legislation would be a “tall order” in the upper chamber.

Other controversial investigations in the Senate were triggered by the massive flooding in parts of Luzon and the monstrous traffic caused by the shift to a completely cashless payment scheme in tollways.

In November, the country’s news cycle was dominated by images of submerged homes and flooded roads. This, after three typhoons hit the country in a span of weeks.

With the massive flooding catching the attention and concern of senators, an inquiry was called to determine why this happened.

At the hearing, senators had called on concerned agencies to put up proper infrastructure and interventions to prevent the repeat of the disasters.

Before the year ended, the head of the Toll Regulatory Board (TRB) took a beating at a Senate inquiry into the faulty implementation of the radio-frequency identification (RFID) payment system in tollways, particularly along the North Luzon Expressway.

Transportation Secretary Arthur Tugade at one point during the hearing admitted seeing flaws within the TRB.

“Let’s be frank here, I saw a failure of implementation in the TRB” Tugade told senators during the Dec. 18 hearing.

Lawmakers also scored the TRB chief for failing to impose sanctions against toll operators over glitches in the RFID system since 2017.

READ: TRB scored for not punishing toll firms over RFID glitches since 2017

“You have the power but you don’t use it. Ever heard of ‘regulatory capture?’ The TRB is being ‘captured.’ Operators are laughing at us,” said Sen. Sherwin Gatchalian.

The regulatory board recently earned the ire of the President, who warned its officials that they would be removed in the event of “another fiasco.”

READ: Another fiasco and you’re all fired, Duterte warns TRB amid RFID mess

Sen. Grace Poe, chair of the Senate public services committee, said the TRB chief should just step down from his post before he is sacked over the RFID mess.

READ: TRB chief should just resign instead of getting sacked over RFID mess – Poe

With 2020 coming to a close, the Senate is gearing up for another year of investigations in search for clear answers on controversial issues.

Among resolutions filed in the Senate were calls for an investigation into the spate of extrajudicial killings in the country as well as an inquiry into the government’s “game plan” on the vaccination of Filipinos against COVID-19.

The chamber is also expected to look into the P33-billion “parked” funds in the Philippine International Trading Corporation.#