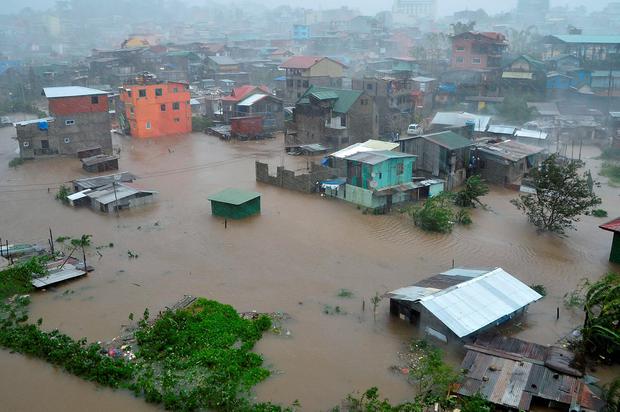 It was a scene “too hard to watch,” recalled Bobby Dumayag, Jr., whose now-viral video showed Cagayan farmers desperately chasing sacks of corn being carried away by floodwaters at the height of Severe Tropical Storm “Maring” on Monday. When the embattled farmers didn’t heed his warning about the dangerous currents, the 19-year-old working student decided to help them salvage their harvest rather than see their loans for fertilizer and seeds go down the dain. But it was too late. Dumayag said that only 20 out of 450 sacks of corn were saved.

In Baguio, rescuers dug out the bodies of a family of three whose house was buried in a landslide caused by Maring’s torrential rains. Earlier, three siblings aged 2, 6, and 8 perished on the way to the hospital after their house similarly collapsed under a mudslide in Benguet.

Per the latest reports, Maring left at least 19 confirmed dead, mostly from Ilocos Sur, Pangasinan, and Palawan; 13 are still missing. Some 50,000 families and 194,677 individuals were affected. Total agricultural loss is placed at P1 billion, with P29.4 million in the Cordilleras alone and P32 million in Cagayan, while infrastructure losses stand at P66 million. Agriculture officials said some 29,000 farmers and fisherfolk were affected. At least 109 houses in Central Luzon, Mimaropa, Caraga, and the Cordillera Administrative Region (CAR) were damaged. Fourteen incidents of landslides were reported, affecting at least 237 barangays mostly in the Ilocos region and CAR.

It’s been a double whammy as well for Batanes, which is currently in the grip of a COVID-19 surge, even as it is still recovering from the devastation wrought by Typhoon “Kiko” in September.

Weather reports said Maring dumped 625 mm of water in Baguio over 24 hours, much more than the calamitous Typhoon “Ondoy” in 2009, whose 455 mm of rain in as many hours marooned Metro Manila in murky floodwaters for days.

News of Maring’s devastation came as a surprise to many. There were no extraordinary warnings from the weather bureau and the National Disaster Risk Reduction and Management Council (NDRRMC), and no mention at all of the calamity unfolding as President Duterte gave a public address on Monday night. It was only through social media—the desperate posts of people in the battered areas and Vice President Leni Robredo’s tweets around 1 a.m. Tuesday morning appealing for help and providing updates—that most people got alerted about the disastrous floods sweeping across the country’s northern provinces. Was the government caught flatfooted by Maring, and was the NDRRMC remiss in warning provinces about the intensity of the howler?

For sure, some local government units (LGUs) and national agencies have been quick in their response to the disaster. Families were immediately ferried to evacuation sites, with the elderly and infirm riding the backs of Coast Guard personnel. The NDRRMC said some P700,000 worth of assistance have been provided the Ilocos region and CAR, mostly through food packs, hygiene kits, and cash aid. The Department of Agriculture said it has similarly set aside P172 million in rehabilitation funds for the affected farmers and fisherfolk, while Malacañang said it had deployed rescue personnel from the Armed Forces of the Philippines, the Coast Guard, the police, and the Bureau of Fire Protection and had allocated a P128-million fund to the social welfare department and P219-million worth of food packs to be distributed among 373,737 families.

But a more comprehensive solution to the perennial flooding that afflicts the region is clearly warranted. In November 2020, Cagayan was also inundated by massive floods brought on by Typhoon “Ulysses.” A study by the global management consulting firm McKinsey & Company, noted that “the climate hazards the (Asian) region faces in the future, from heat waves to flooding, are likely to be more severe, more intense, or both.” Countries in Asia must ensure that climate risk is incorporated in the urban planning and capital decisions of policymakers, the study said.

The North needs all the help it can get at this time, and national agencies, LGUs, and especially government officials preoccupied with election activities are called upon to channel their efforts, personnel, relief goods, rescue vehicles, and other available resources to the affected provinces.

Ordinary citizens can do their bit as well by donating goods and volunteering to help in the relief efforts. Among the relief channels are Unicef, the Inquirer Foundation, the Ateneo de Manila University, University of the Philippines’ IskoOps, ARMY Bayanihan, Innabuyog Gabriela Youth, BTS Army Cavite Fanbase, BLACKPINKFUNDS_PH, and Project Pay It Forward.