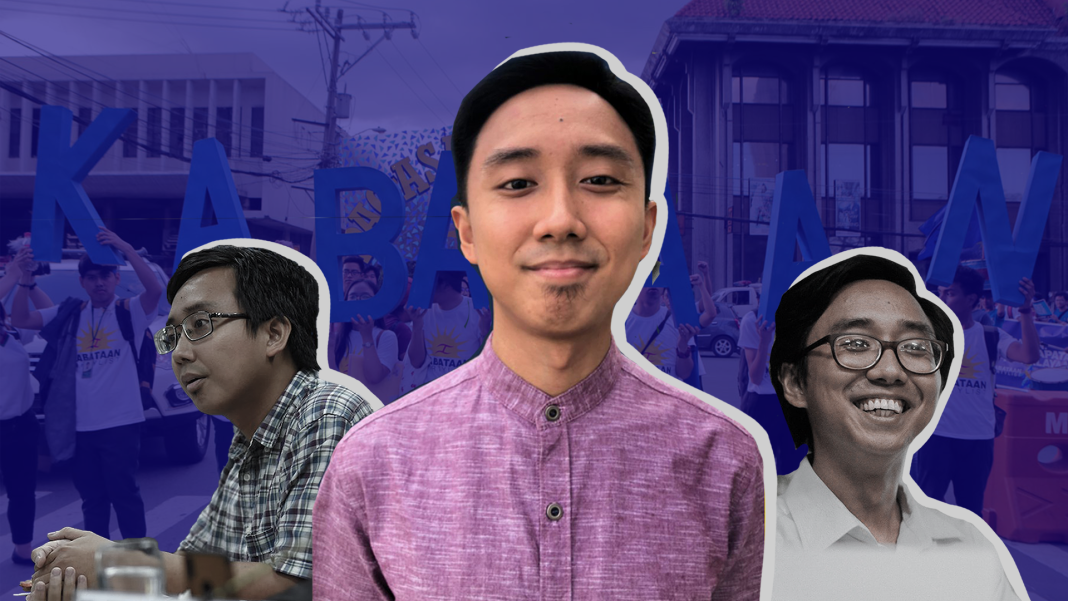 Manuel is a son of an entrepreneur and an overseas Filipino worker (OFW). He lives in Arevalo District of Iloilo City.

The 20-year-old BS Applied Mathematics graduate takes pride in his advocacy and ideals.

Manuel recently made history when he got a nearly perfect general weighted average (GWA) of 1.099.

He is an active leader in the College of Arts and Sciences Student Council and the Youth for Accountability and Truth Now – Panay Alliance.

He also served in the following positions:

A day after UP Visayas posted an article on Manuel’s achievement, he was in a rally in front of the Commission on Higher Education (CHED) Region 6 office fighting for the rights of Filipinos for affordable education and opposing the budget cut of the UP System.

The student said he understands that some people do not understand their principles and how he and his peers express it.

Manuel said he is not against the government but noted that some things should not be happening and needs to be changed.

So what inspired him to get an almost perfect GWA?

(The money being used for our education is the fund from the Filipino people. I study well so that in the end, I would be able to share what I know to others.)

Manuel has not yet made up his mind where he would like to work after college but he is looking forward to taking a master’s degree.

Manuel, a student activist, has taken part on many mobilizations to call for action on various social issues. In his speech, he addressed criticisms that militants usually don’t care about their studies.

Manuel has proven those critics wrong as he graduates with a general weighted average of 1.099.

Manuel said student activists know how to manage their time.

Raoul Manuel and his choice to continue serving the Filipino youth

Raoul Manuel, 27, is the first nominee of Kabataan Partylist, the youth representation in Congress. The youth partylist is among the progressive groups which are being accused of being fronts of the underground revolutionary groups.

MANILA – Those who regularly follow current events would never miss Raoul Manuel, the student leader who made Senator Roland “Bato” Dela Rosa flare up during a Senate hearing on mandatory Reserve Officers’ Training Corps in 2019.

He was among the resource speakers then as the president of the National Union of Students in the Philippines (NUSP).

Dela Rosa had an outburst when Manuel pointed out the senator’s position on the supposed release of convicted rapist and murderer Antonio Sanchez. The senators in the hearing dismissed it as something that is not connected to the issue at hand.

“It was expected (that he would react that way) because we know how he is as a public official. Ganun naman sya, wala na s’yang maidepensa kundi mag amok,” (He is like that, he could not defend himself so he resorted to throwing tantrums) Manuel said in a telephone interview with Bulatlat.

Admittedly, he said that was not a part of his speech but even then, he said it only highlighted how hypocritical public officials are.

“They said they will teach human rights in ROTC but they themselves don’t embody human rights. That is the context,” he said.

Manuel, 27, is the first nominee of Kabataan Partylist, the youth representation in Congress. The youth partylist is among the progressive groups which are being accused of being fronts of the underground revolutionary groups.

Since elementary, Manuel had been an exceptional student. He was a math champion from Grade 4 to fourth year high school except Grade 6 when he placed second.

Although he is proficient in math, he said he still had a hard time choosing a course in college because he also had other interests. But since math is his forte, he decided to pursue BS Applied Math at the University of the Philippines-Visayas.

Manuel did not only focus in math competitions. He was also a member of the science club during high school. He got involved in many activities such as outreach programs, tree planting, leadership training and all other opportunities where he thought he could learn outside the four walls of the school.

He later learned about Jalaur Dam, and the situation of the indigenous people living in the area. This is why the defense of the environment became one of his advocacies.

Manuel also had an extensive experience in being a student leader as he became president of the student council in high school.

“As part of the student council, there are many issues that are being discussed with us,” Manuel said, adding that even before he became an activist in college, he already had a grasp of what was happening on the ground.

As a student leader

In college, Manuel said he became a member of an environmental group before he was elected to the student council. Manuel served as a chairperson of Katipunan ng Sangguniang Mag-aaral sa UP (KASAMA sa UP), a system-wide student council alliance in the university. He also served as a student council chair of the College of Arts and Sciences in his senior year.

After graduating from college, Manuel entered graduate school taking up a Master’s degree in Applied Math in UP Diliman.

This is where he got elected as UP student regent for the academic year 2016-2017. A student regent is the sole representative of students in the Board of Regents, the highest decision-making body in the university.

Manuel continued the campaign for free education during his term as student regent as education in UP then was costly. UP students called the junking of the socialized tuition system. During that time, a student who will fall under bracket A of the STS will have to pay a huge amount of fee as per unit in UP then is worth P1,500 ($30).

Read: Socialized tuition | The UP experience

Gino Estella, then a mass communication student in UP, worked with Manuel during his term at the Office of the Student Regent. He said during that time, Manuel made sure that the campaign for the junking of STS would be sustained. He also joined the campaign against the general education reform among others.

The OSR also stood for the resumption of peace talks when President Duterte’s administration was still open to negotiate with the National Democratic Front of the Philippines. He also joined the call for the release of political prisoners and supported the campaign for the Comprehensive Agreement on Social and Economic Reforms.

Alongside the campaign on students and national issues, Manuel was able to manage the OSR. Estella described Manuel as very productive, writing the memoranda and crafting statements on various students’ issues.

Manuel was also able to institute campus-level summits. He also made sure that all UP campuses will be able to join the general assembly of student councils, even the School of Health Sciences of UP in Koronadal in Mindanao and Palo, Leyte.

Did Manuel ever take a break with his work and studies?

Estella said he also doesn’t know. “I never saw him taking a break. I guess he really just enjoyed what he is doing and never saw it as a work really,” he said, adding Manuel is really engrossed in his work.

“It was clear to him that oppressors do not take breaks, it was like parang sinasabayan nya yun,” he said, adding that Manuel is a true propagandist.

“He is a very strong person with regards to the campaign aspect. He has clear campaign lines and statements. He writes very comprehensively and eloquently even. He can pinpoint the message and know where to drive the point of the campaign,” Estella said.

How does he balance his studies and at the same be actively involved in activism?

On serving the Filipino youth and students

Being the eldest in the brood of five, Manuel said his parents also expected that he would work for the family.

However, Manuel stayed in the youth movement and now he is the first nominee of the Kabataan Partylist for next year’s election.

He said his parents fully support him in the path that he chooses.

Read: What it’s like to have an activist child

“My father said he would campaign for me,” he said.

His mother is working as an editor in Iloilo City while his father is an overseas Filipino worker.

He said his parents too are worried with the intensifying attacks against the progressive groups. But he said he explained to them the context of these attacks. “We just rely on prayers,” he said, adding that accusations against Kabataan Partylist were refuted as cases filed against its leaders as well as other progressive youth groups who were included in the trumped up charges filed by the members NTF-ELCAC were dismissed in courts.

“They are targeting the youth because they know fully well our potential when we are united in our causes,” Manuel said, referring to the red-taggers.

In spite of many tasks, Manuel said he ensures that he gets enough sleep to take care of his physical and mental health.

“If I have extra time I also watch series and play board games to avoid burnout,” he said. (RVO)