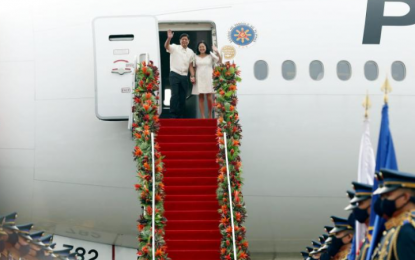 The US delegation is lean at 19 members, composed of a sprinkling of cabinet secretaries and some congressmen and headed by labor secretary Martin J. Walsh. No head of government (no Joe Biden). Likewise for India, which is sending a very small delegation of only four union ministers plus three state chief ministers (no Narendra Modi).

Finland’s government portal has also announced that Finnish prime minister Sanna Marin will attend, together with an even leaner delegation of only three ministers.

But for the president of impoverished Philippines who will attend next week’s World Economic Forum 2023 in Davos, Switzerland, there is no transparency in announcing the size of its delegation. Filipinos living in Switzerland who are closely watching the event gave an astounding number – a delegation of at least 70 members, including private and business people, names and designations unknown.

How did our sources know? The invitation was extended by WEF founder and executive chair Klaus Schwab at the sidelines of the Asean Summit in Phnom Penh, Cambodia last November 12. One month later, his first cousin House speaker Martin Romualdez announced that the president was accepting the invitation.

Here’s the problem. The Davos gathering begins on January 16. By the time Marcos Jr. had reached a decision to embark on another foreign trip (his eighth in under 7 months), hotel rooms in Davos have been fully booked since months before (astronomical prices range from “the crappiest hotel rooms at $500 a night, and a private chalet costing $140,000 for the week,” says a past business attendee, and that is 2011 prices yet). The result – Philippine representatives in Bern have been scrambling to find hotel rooms for a delegation that numbers at least that size of 70 persons.

Marcos Jr. is not the first Filipino president to attend the WEF. There was his current adviser Gloria Macapagal Arroyo in 2008 (delegation size unknown) and Benigno Aquino III (seven).

What did these past Davos visits achieve for the ordinary Filipino? At most, there were “investors who signified their intention to expand,” while “new business groups have committed to invest.” No figures were given. All presidents go to Davos using the same worn-out plot: “to seek international recognition of the Philippines’ economic gains.” Aquino reported on his anti-corruption drive and the arrest and jailing of Gloria Macapagal Arroyo on corruption charges.

For Davos 2023, 52 heads of states and governments have been invited to attend. The only other Asian head of government attending is South Korea president Yoon Suk-yeol. Among the other presidents attending are those of Spain, Colombia, Poland, South Africa, Switzerland, and the chancellor of Germany Olaf Scholz representing the only major European power to attend.

Academic scholars from the University of Götinggen in Germany, University of California at Berkeley, National University of Singapore, and the Kiel Institute for the World Economy (Kiel, Germany) have asked the question: Does it pay off to attend Davos? From 2009 to 2016, the researchers noted that a majority of attendees come only from first world economies (the US, the UK, and Switzerland topped). “The annual meeting is dominated by high-income countries, and the share of attendees from low and middle income countries is stagnating.”

Moreover, by studying the number of company attendees across all given years, the research “did not find evidence of a positive Davos effect on firm performance.” It also “did not detect any measurable effect” of Davos attendance of heads of states in firm performance.

Zurich Magazine does not offer much positive outlook either. “As a gathering of the global elite, Davos has often been a lightning rod for protests about everything from the rapid globalization of the 1990s to the runaway climate change of this century.” As a consolation, it offers two solid achievements: “Davos helped to avert war between Greece and Turkey with the signing of the Davos Declaration in 1988. It was also in Davos that Gavi, the vaccine alliance, was launched in 2000.”

The reality is, WEF is all glam. Davos is an upscale ski resort in the German-speaking side of the Swiss Alps. It has been criticized by some as  “a talking shop for the jetset that merely adds to the world’s carbon footprint.”

The theme of this year’s WEF is “Cooperation in a Fragmented World.” It attempts to look at the crises that have deepened divisions in the geopolitical world. One of the highlights of the meeting will be discussions on Ukraine and its need for a post-war reconstruction effort.

Among the five topical themes is “high inflation, low growth and high debt economics.” But for the president of the Philippines, his topic in Davos will be the Maharlika Investment Fund. Imagine a thief who once deposited his family’s loot in Swiss bank accounts and who now wants the world to know that he is suddenly a beggar for investors’ money. Unconfirmed reports say among the participants in the Marcos entourage will be Irene Marcos Araneta. If true, let the implication of that sink in.

By the way, among the 70 or so in that huge entourage will be showbiz stars who will entertain the “meet and greet” with Filipinos in Switzerland. The likely venue will be one of the Hyatt hotels. Again, no names of the performers have been specified.

So who foots the bill for Davos? Not the Marcoses. Us.