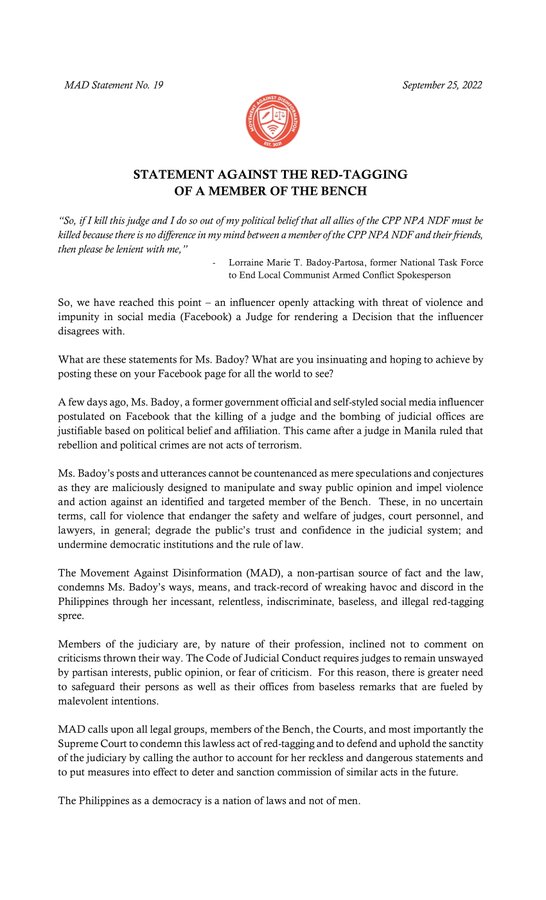 MANILA, Philippines (Updated 8 p.m.) — Threats against a judge made by a former Palace official who disagrees with a Manila court’s dismissal of a government petition to declare communist rebels as terrorists could cause “lasting damage” to the institution, an organization of judges said Saturday night.

In a statement, trial court judges’ group Hukom called out vocal anti-communist Lorraine Badoy-Partosa for a post red-tagging Manila Regional Trial Court Judge Marlo Magdoza-Malagar for ruling that incidents that the government cited in its petition did not fit the definition of rebellion in the Human Security Act, a law already repealed by passage of the Anti-Terrorism Act.

In a separate statement on Sunday, Movement Against Disinformation — a broad coalition with members from the academe,the legal profession and civil society — called the rants a “call for violence” that put judges and others in the legal profession in danger.

Badoy-Partosa, who now denies putting the post up, accused the judge of “lawyering” for the Communist Party of the Philippines-New People’s Army and called for lenience “if I kill this judge”, saying she believes that the communists and their alleged allies should all be killed.

“We are painfully aware that prior to this incident, judges had been vilified with labels such as hoodlums in robes, protectors of drug pushers and drug lords, and some have even been killed,” Hukom said in a statement sent to media.

The group said that while judges usually prefer to let their decisions speak for them, even online attacks like Badoy-Partosa’s are “attacks on the rule of law and the independence of the judiciary” that should not be accepted as normal.

Hukom said these have to be called out because of their “chilling effect on the exercise of our judicial functions and the lasting damage they cause to our institution.”

Movement Against Disinformation, which includes the Philippine Bar Association and the Alternative Law Groups as members, pointed out that Badoy-Partosa’s posts about killing a judge and bombing judicial offices “cannot be countenanced as mere speculations and conjectures” but ate meant to “impel violence and action against an identified member of the Bench.”

“These, in no uncertain terms, call for violence that endanger the safety and welfare of judges, court presonnel, and lawyers in general; degrade the public’s trust and confidence in the judicial system; and undermine democratic institutions and the rule of law.”

MAD also called on legal groups, judges, the courts and the Supreme Court “to condemn the lawless act of red-tagging and to defend and uphold the sanctity of the judiciary by calling the author to account for her reckless and dangerous statements” and to make sure that others who do the same are also held to account.

Badoy-Partosa is a former spokesperson of the National Task Force to End Local Communist Armed Conflict, a multi-agency body that has repeatedly claimed that activist groups are fronts of the communist rebels. During the Duterte administration, official social media accounts of police and military units regularly shared posts equating activism with terrorism.

Badoy-Partosa has herself labelled sitting lawmakers, members of the National Union of People’s lawyers, organizers of community pantries distributing food during the pandemic lockdowns, and a Catholic nun as being affiliated with the CPP-NPA.

Part of Magdoza-Malagar’s decision stressed that members of activist groups and national democratic mass organizations “espouse valid societal change, without necessarily giving through to ‘armed struggle’ or ‘violence’ aimed at overthrowing the government, as a means to achieve the same.” — Jonathan de Santos