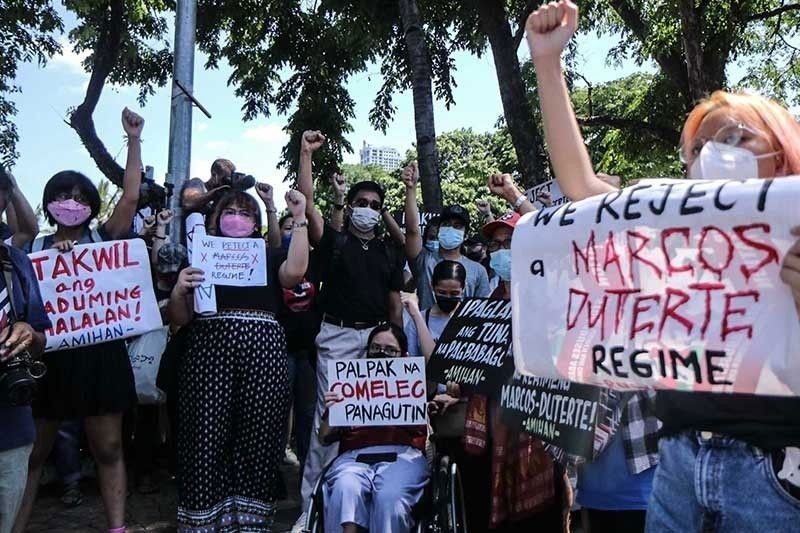 MANILA, Philippines (Updated 3:02 p.m.) — In dismissing the Department of Justice’s proscription petition against the Communist Party of the Philippines-New People’s Army, the Manila court warned against the dangers of red-tagging groups or activists that are simply airing concerns on their specific advocacies or to how the government is running the nation.

The Manila Regional Trial Court Branch 19 in a decision dated September 21, signed by Presiding Judge Marlo Magdoza-Malagar, said membership in national democratic mass organizations (NDMOs) does not automatically mean that the individual is also part of underground illegal movements or even the CPP-NPA.

“Members of NDMOs espouse valid societal change, without necessarily giving through to ‘armed struggle’ or ‘violence’ aimed at overthrowing the government, as a means to achieve the same,” its decision read.

The court junked the DOJ’s request to declare members of the CPP and its armed wing, the NPA, as terrorist groups under Section 17 of the Human Security Act of 2007. The HSA has since been repealed by the Anti-Terrorism Act of 2020, under which CPP-NPA as designated as terrorists.

In the same petition the DOJ initially asked to name 600 individuals, which included activists and members of non-government organizations, as members of the CPP-NPA, but the individuals have denied allegations made against them. The list of respondents have since been trimmed down to less than 20 names.

“To automatically lump activists, mostly members of the above ground organizations as members of the CPP-NPA invariably constitute red-tagging,” the court added, further explaining that activists red-tagged may be exposed to security threats.

Judge Magdoza-Malagar also highlighted the importance of joining NDMOs or other activist in the democratic process “where individuals and communities exercise their right to shape government policy and ultimately, society.”

“Activism is a political act, by which an informed and active citizenry expresses and works for change in an array of political issues that affect them,” the court said.

In its decision, the court also noted that while the CPP-NPA has organized members, it does not exist “for the purpose of engaging in terrorism.”

It also raised that even if an individual is part of the CPP-NPA, it is possible that they are part of a faction that “does not necessarily espouse, much less commit, acts pursuant to, ‘armed struggle.’”

As the government continues on with efforts to counter insurgency, Judge Magdoza-Malagar wrote that it should make efforts in respecting people’s right to “right to dissent, to due process and to the rule of law.”

“The government can, while uncompromising in its fight against the Communism, regard the CPP’s act of taking the cudgels of the marginalized — as an impetus to better address these sectors’ concerns,” the court said.

Meanwhile, CCP Chief Information Officer Marco Valbuena said the court’s decision was “reasonable and fair,” noting that Magdoza-Malagar took into account a historical point-of-view and considered the perspective of the Filipino people’s struggles in her discussion.

The CCP also took note of the court’s emphasis that the CCP and the NPA are not terrorists, but are waging armed resistance directed to the “agents of the reactionary state” of the Philippine government.

“It is gratifying that the judge took effort to read the constitution and program of the CCP, the provisions of which she declared to be ‘reasonable aspirations of any civilized society,’” Valbuena said in a statement Thursday afternoon.

Valbuena also noted that the court’s decision would have legal and political implications since the military and the police have been using both the HSA and the ATA proscription against the CPP and the NPA as a means to harass leaders and members of legal democratic organizations whenever they are red-tagged.

“With the decision of the Manila RTC, I think the NTF-ELCAC is now legally obliged to zip its big mount and stop its terrorist-branding against the CPP and NPA, and its campaign of suppression against workers unions, peasant associations and the wide range of patriotic and democratic organizations,” Valbuena said, adding that the task force may face legal problems otherwise. — with reports from Kristine Joy Patag