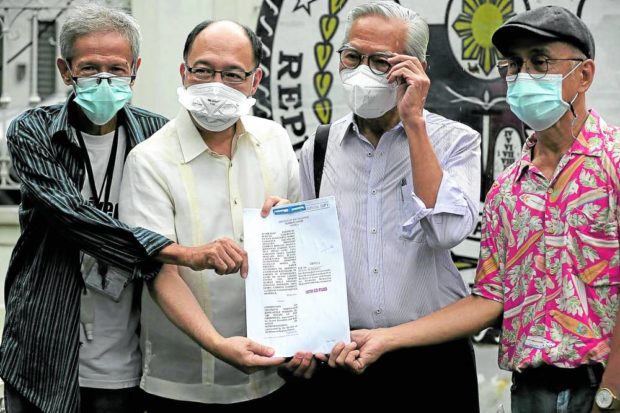 MANILA, Philippines — The “gods of Padre Faura” have cleared the way for Ferdinand Marcos Jr.’s inauguration as the 17th president of the Philippines.

Voting 13-0 with two abstentions, the Supreme Court threw out the legal challenges to Marcos Jr.’s presidential candidacy, delivering a blow to the victims of rights violations during the regime of his father, the late deposed dictator Ferdinand Marcos.

The high court issued the decision during its weekly en banc session on Tuesday, or two days before Marcos Jr. is sworn in. Chief Justice Alexander Gesmundo has accepted the invitation to administer the president-elect’s oath of office in a ceremony at the National Museum.

The justices upheld the resolution of the Commission on Elections (Comelec) dismissing two petitions separately filed by martial law survivors and rights activists seeking Marcos Jr.’s disqualification on the basis of his tax evasion conviction in 1995.

Reacting to the tribunal’s vote, playwright-activist Bonifacio Ilagan said resistance to what he called the erosion of law in the country would continue.

Ilagan, who heads the Campaign Against the Return of the Marcoses and Martial Law, one of the petitioners, said he and his colleagues were not “surprised that the high court has opted to swim with the tide of acquiescence to a Marcos rehabilitation, notwithstanding all the historical distortions and false narratives that made the dictator’s son delude the people.”

Still, Ilagan said, it was “difficult to comprehend that the tribunal decided on merit that Marcos Jr. did not disobey the law by wilfully not paying taxes, did not commit moral turpitude, and could go scot-free, being now above the law.”

House Assistant Minority Leader and ACT Teachers Rep. France Castro told the Inquirer that despite the “not surprising” decision, “we still hope that the Supreme Court would uphold its independence and initiative, especially on issues and cases involving human rights, welfare of consumers, and our country’s sovereignty.”

In a statement released by its Public Information Office (PIO), the Supreme Court said “the exercise of its power to decide the present controversy led [it] to no other conclusion but that respondent Marcos Jr. is qualified to run for and be elected to public office.”

“Likewise, his COC (certificate of candidacy), being valid and in accord with the pertinent law, was rightfully upheld by the Comelec,” it said.

The high court did not provide a copy of the decision written by Associate Justice Rodil Zalameda.

The PIO said it would post a full copy of the decision on the tribunal’s official website upon receipt of the document from the Office of the Clerk of Court En Banc.

It said Associate Justices Antonio Kho and Henri Jean Paul Inting, both appointees of President Rodrigo Duterte, did not take part in the deliberations.

Kho served as elections commissioner prior to his appointment to the high court. Inting is the brother of Comelec Commissioner Socorro Inting, who voted to junk the disqualification petition against Marcos Jr.

“The decision vindicates the position of the party that [candidate] Marcos was under no disqualification to run for president and therefore he did not lie in his [COC],” Briones said in a statement.

On May 17, rights advocates and martial law victims petitioned the Supreme Court to intervene in the Comelec’s supposed error in allowing Marcos Jr. to run for president.

The petitioners, led by Fr. Christian Buenafe of the Task Force Detainees of the Philippines and Fides Lim of Kapatid-Families and Friends of Political Prisoners, argued that the guilty verdict handed down on Marcos Jr. by a Quezon City court perpetually barred him from holding public office.

Marcos Jr.’s conviction of failure to pay taxes and file income tax returns from 1982 to 1985 when he was vice governor and later governor of Ilocos Norte was upheld by the Court of Appeals in 1997.

“Elections are more than just a numbers game such that an election victory cannot bypass election eligibility requirements,” they said. “The balance must always tilt in favor of upholding the rule of law.”

Another suit was filed at the high court on May 18 by another group of martial law survivors including former Bayan Muna Rep. Satur Ocampo and former Gabriela Rep. Liza Maza, saying that Vice President Leni Robredo, who lost to Marcos Jr. by nearly 16 million votes, was the rightful successor of President Duterte.

According to the petitioners, Marcos Jr. was “already disqualified” even before he filed his COC. “Simply put, he should not have been allowed to run for public office to begin with,” they said, adding:

“Considering that the votes cast in favor of a disqualified candidate are invalid, the winner, therefore, is the candidate who received the greatest number of valid votes.”

Reaction to the high court’s ruling was generally muted as preparations for the presidential inauguration continued in full swing.

But already, according to Renato Reyes, secretary general of the activist group Bayan, there were “shades of Marcosian martial law” in the preparations, with the Philippine National Police “moving heaven and earth to deny the people their constitutional right to protest” on Thursday.

Reyes said Bayan would continue to resist efforts toward the full restoration of the Marcoses, who were ousted in a bloodless revolt in February 1986 after 14 years of one-man rule.

“The next few years will see an intensified struggle against the Marcoses’ historical denialism as the regime works to use official platforms to erase the crimes of the dictatorship and extinguish their criminal liability,” he warned.

Specifically, Reyes said, Bayan would continue to hold Marcos Jr. to account for the abuses and crimes of the dictatorship, “including the recovery of [the family’s] ill-gotten wealth, the payment of their outstanding estate taxes, and the prosecution of their pending cases.”

“The fight for nationalism and democracy will not die with another Marcos in Malacañang,” Reyes said. “It will burn ever brighter as the people continue to resist, organize and mobilize.”

—WITH REPORTS FROM JEANETTE I. ANDRADE, JULIE M. AURELIO, AND INQUIRER RESEARCH