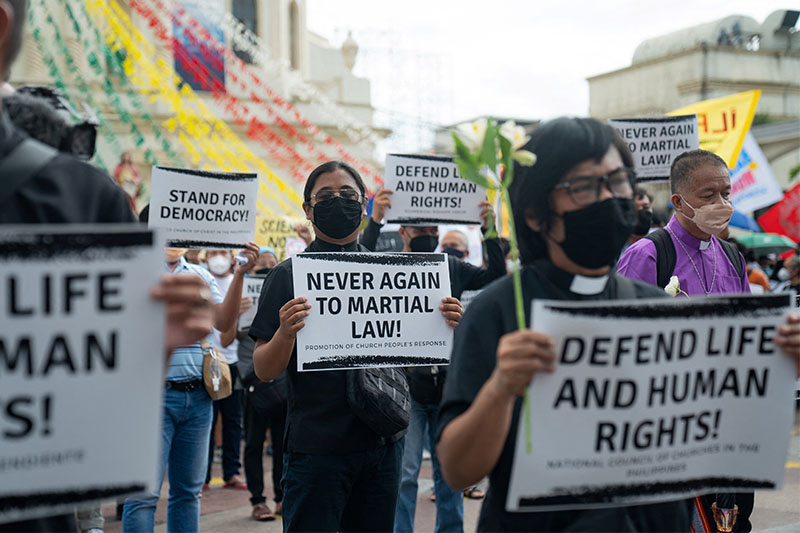 The hashtag “#NeverForget” entered Twitter Philippines’ trending list as Ferdinand Marcos Jr. gets inducted into the Office of the President for a six-year term beginning June 30.

Marcos Jr. was inaugurated at the National Museum of Fine Arts where he took his oath before Chief Justice Alexander Gesmundo.

Marcos Jr. in his oath-taking was accompanied by his wife, lawyer Liza Araneta-Marcos and their sons Sandro, Simon and Vincent.

In his inaugural speech, the president’s campaign message of “unity” was stressed, where he acknowledged Filipinos’ dream for a better nation.

“I once knew a man who saw what little had been achieved since independence in a land of people with greatest potential for achievement, and yet they were poor. But he got it done, sometimes with the needed support, sometimes without,” he said.

“So will it be with his son. You will get no excuses from me,” Marcos Jr. added.

While the inauguration rites were ongoing, so were the protests from several Filipinos—in and out of the country.

Progressive groups flooded the historic Plaza Miranda, while Martial Law victims and survivors gathered at the Bantayog ng mga Bayani and took an oath to guard against the trampling of people’s rights.

Outside the homeland, some Filipinos marched in the colorful streets of New York’s Times Square to voice their rejection of the inauguration.

The protests also filled digital spaces as the hashtag “#NeverForget” landed on local Twitter’s trending list where others reminded their fellow Pinoys about the 21-year Marcos regime.

Another Twitter user shared a picture of a supporter in a “Kakampink” rally with the placard: “Thesis ang rine-revise, hindi history.”

“Daily reminder under a Marcos-Duterte regime:#NeverAgain #NeverForget,” the user captioned.

“Kakampink” refers to the supporters of former vice president Leni Robredo‘s presidential campaign in the 2022 elections.

The message is a reference to historical revisionism against the memories of Martial Law and the abuses during Marcos Sr’s regime.

Another Twitter user reposted a clip from the movie “Alone/Together” which featured Liza Soberano‘s character giving a lecture about history as a National Museum tour guide.

Remembrance of the past

Marcos Jr’s father ruled the country for two decades and a year, far more than what was constitutionally allowed.

Nine years of this were under Martial Law imposed to supposedly quell the communist insurgency and restore order.

Critics, however, believe it was his way to extend his term.

Martial rule saw all of the powers transferred to the president. He also imposed a curfew and had assemblies forbidden.

The period was rife with curtailment of civil liberties, extrajudicial killings and unsolved disappearances, media suppression and economic recession, among others.

It was a period of impunity where activists, human rights defenders and civilians were arrested and detained following the suspension of the writ of habeas corpus, a legal remedy protecting citizens from unlawful arrests and indefinite detentions.

London-based human rights organization Amnesty International said that “some 70,000 people were imprisoned and 34,000 were tortured; over 3,200 people were killed” during Martial Law.