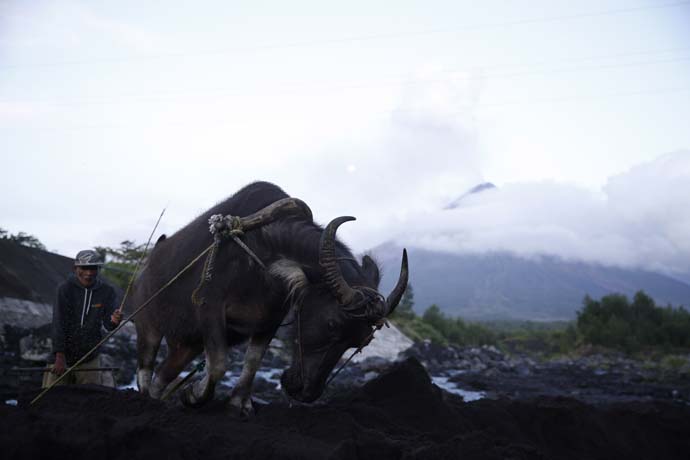 LEGAZPI CITY — Authorities here have ordered a decamp of all persons living outside the eight-kilometer extended danger zone to solve the problem of heavy congestion in the evacuation centers.

Claudio Yucot, director of the Office of Civil Defense (OCD) of Bicol region, said he had already issued the recommendation to Albay Disaster Risk Reduction and Management Office to identify the families living outside the extended danger zone.

A worker uses a water buffalo to gather sand and gravel from a river as Mayon volcano spews ash in Santo Domingo, Albay, February 2,2017. (Czar Dancel)

“We have seen how congested some of the evacuation centers and based on our discussions with volcanologists, it is safe to send those living outside the extended danger zone back to their homes,” said Yucot.

“So this is a solution that we see because they are going back to their homes anyway. And we understand that because there is really no substitute to the comfort of your home,” he added.

The ideal ratio of classroom to evacuees is one room per eight to 10 families but currently, the ratio is at one classroom per 20 and even 30 families.

“We immediately met with the Philippine Institute of Volcanology and Seismology and they told us that those living within nine and 10 kilometers away from the crater are already safe,” said Yucot.

Volcanologists also explained that, based on the history of Mayon’s eruption, the farthest drop of superhot pyroclastic flow is at seven kilometers away from the crater.

The additional one kilometer radius from the seven kilometer extended danger zone serves as a buffer or a precaution for a worst-case scenario of pyroclastic materials dropping.

Bases on the OCD recommendation, trucks from the police, military and local government units would fetch the evacuees and transport them back to their houses.

Legazpi City Mayor Noel Rosal said that he will meet first with the barangay captains of the affected areas to discuss the OCD recommendation.

The meeting is aimed to explain to the barangay captains and those affected why they are being sent back home.

It was recalled that Rosal also ordered the decamp of evacuees in Legazpi on January 18 but had to be transported back to the evacuation centers after the January 22 eruption that prompted volcanologists to raise Alert Level 4 over the volcano.

“We will be implementing the decamp tomorrow (Saturday),” Rosal told the Manila Bulletin a separate interview.

Sto. Domingo Mayor Herbie Aguas said that decamp will also be implemented in his town today.

But what if the residents refuse to go back?

Yucut said that they understand the concerns of the local residents who would refuse to go back, saying those outside the eight kilometer extended danger zone are also economically-displaced as a result of the eruption.

He said they will leave it to the provincial government to decide on the matter.

Cedric Daep, head of the Albay Public Safety and Management Office, said that they will not force the residents outside the eight-kilometer danger zone to go back.

“But they should anticipate the scenario that they may not avail some of the services there because they will be no longer considered as evacuees,” said Daep.

Some of the residents are expected to resist the decamp for fear that they will no longer avail of the relief goods and other benefits.

But Daep assured those economically-displaced families living outside the eight-kilometer danger zone that there will be a continuous distribution of relief goods and they can also avail of the cash-for-work program.

As of today, local authorities have started updating its list of evacuees– excluding those outside the danger zones.

Yucot said that some of the evacuees in congested evacuation centers will be transferred to schools and classrooms that would be vacated as a result of the decamp.

Although they will be implementing a decamp, military and police vehicles will be placed on standby if in case there is a need for quick evacuation.