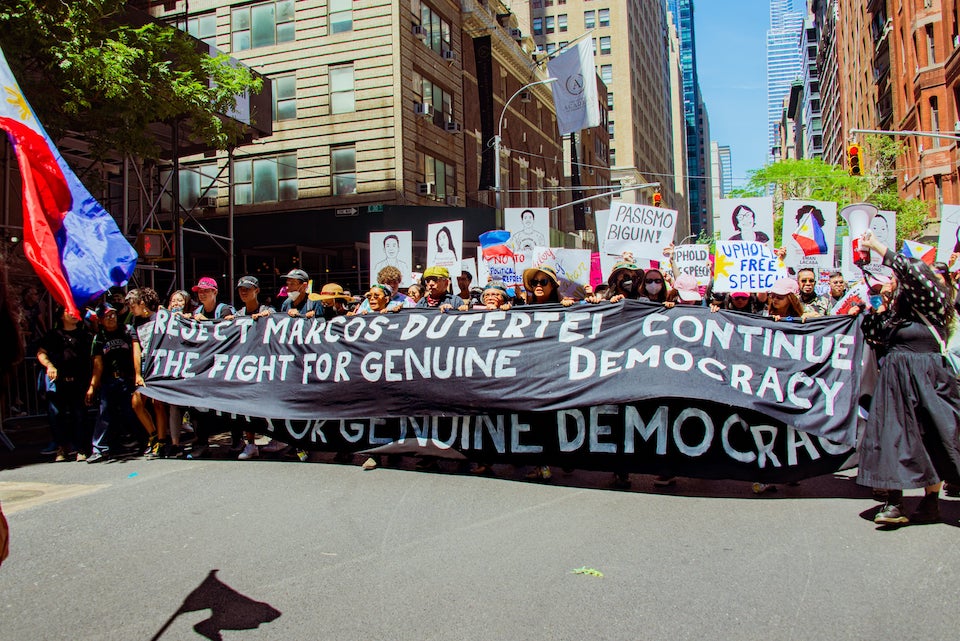 Marching behind a massive banner that read “Never Again! Continue the Fight for Genuine Democracy!” a mix of young and old – from martial law survivors in their 70’s and 80’s to Filipino youth from college and university student groups to supporters of Leni Robredo– all chanted together in unison to bring their message forward. The contingent garnered support from more than thirty organizations.

Led by Broadway and performing artists, the throng sang, “Di nyo ba naririnig? Tinig ng bayan na galit. Himig ito ng Pilipinong di muli palulupig (Don’t you hear it? It’s the voice of angry people. This is the song of the Filipino that won’t be oppressed again).” The song is a Tagalog adaptation of the Les Miserables protest anthem first performed in 2017 at the 45th commemoration of Marcos Sr.’s Martial Law at the height of Duterte’s drug war and curtailment of press freedom.

PIDC marshals attempted to prevent the contingent from participating, confronting leaders several times throughout the day, even grabbing one marcher while en route. Martial law survivors and elders holding the lead banner asserted, “Let us march!” and were joined in the chant by hundreds in the contingent and on the sidelines. “The effort to stop us from expressing the sentiments of millions of Filipinos during a celebration of Philippine independence is an omen of what lies ahead with the Marcos-Duterte administration,” said Julie Jamora of Never Forget! Coalition Steering Committee.

Resolute in their fight for genuine democracy, the contingent stood their ground and completed the parade route. Some onlookers joined from the sidelines and chanted “Never Again to Martial Law!” and “Marcos, Duterte, Walang Pinagiba! Parehong Tuta, Diktador Pasista! (There is no difference between Marcos and Duterte! They are both puppets, dictators, and fascists!)”

At the end of the march, in front of the parade grandstand, the Never Forget! Contingent unfurled a second banner reading “Reject Marcos-Duterte!” to a cheering and supportive crowd. According to organizers, the contingent “repudiates Ferdinand Marcos Jr. and Sara Duterte because they epitomize the authoritarian, dynastic, and deceitful character of Philippine politics.”

Following the parade, the Never Forget! contingent launched a cultural show at Madison Square Park. One passerby remarked, “Thank you for doing this. My brother was killed during Marcos’ martial law. [The Marcoses] are trying to erase that history, but we can never forget.” Another passerby recounted his own experiences of detention and torture.

The wide support for the contingent’s message is an indication of the growing people’s democratic opposition to the incoming regime. The Never Forget! contingent represents a broad unity of Filipinos across the Northeast that aspire for a truly democratic Philippines. The contingent rejects the system of patronage and oligarchy plaguing Philippine politics, currently embodied in the nefarious Marcos-Duterte tandem.