Goebbels, Hitler’s propagandist, and the lies he inspires in PH 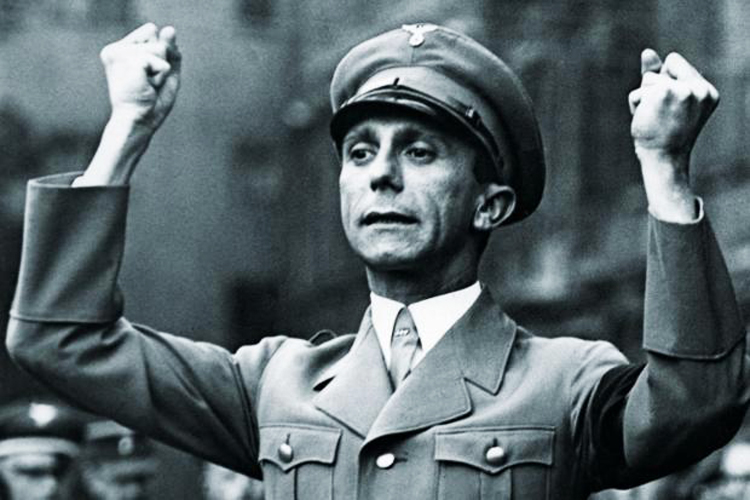 MANILA, Philippines—More than 70 years since the end of Adolf Hitler’s evil empire in 1945, social media has unleashed thousands of versions of Joseph Goebbels, the propagandist who helped Hitler rise to power and exterminate at least six million people just because they were Jews.

As Goebbels found success in his propaganda strategies, one tactic he so efficiently employed to keep the German people enthralled by the Nazis was the indiscriminate use of lies or falsehoods.

“Repeat a lie often enough and it becomes truth,” Goebbels had said at the height of the Nazis’ power, explaining his biggest propaganda strategy.

Goebbels succeeded in the massive use of lies at a time when the source of news, whether fake or real, was limited to newspapers, films, radio broadcasts and word-of-mouth.

That power to deceive has been multiplied countless of times by social media in the age of the internet.

Goebells’ tactics have found parallels in social media-crazy Philippines, especially in its politics.

One example is the continuing attempt to rewrite history about martial law, the late dictator Ferdinand Marcos and his family.

In 2016, the Presidential Commission on Good Government (PCGG) reported that from 1986 to 2016, P170.97 billion have been retrieved by the government from an estimated P253 billion to P506 billion of the Marcoses’ ill-gotten wealth.

But social media accounts, with names that are either aliases or fictitious but clearly followers of Marcos, fill the internet with tales about Marcos, his more than 20-year reign and how he got hold of all his wealth.

Among the posts by the pro-Marcos social media accounts were that the late dictator did not steal money and became rich because his services as a lawyer were paid with “192,000 tons of gold by the Tallanos” referring to a fictitious clan which was supposed to have ruled the pre-colonial Philippines then supposed to be known as the Kingdom of Maharlika.

The gold angle persisted. Other claims made, including by former First Lady Imelda Marcos, were that Marcos got rich because he discovered the fabled Yamashita treasure.

The New York-based Amnesty International said during martial law, 3,257 people were killed, 34,000 were abused and tortured, 70,000 were imprisoned, while 878 went missing.

Thousands of online content, all posted on social media by Marcos followers using aliases or fictitious names, said all those who had been killed during martial law were communist guerrillas. From 1972 to 1986, the Marcos followers’ posts claimed, “if a person follows the law, there’s nothing to fear.”

According to data from Martial Law Museum, Philippine foreign debt during the Marcos years spiked from 0.36 billion dollars in 1961 to 28.26 billion dollars by the time Marcos was thrown out of power in 1986. Bayan Muna Rep. Carlos Zarate estimated that Filipinos would continue to pay for debts incurred under Marcos until 2025.

But pro-Marcos accounts on Facebook, Twitter, YouTube and Tiktok, using aliases or fictitious names, are feeding the social media platforms with unverifiable information that the debts went to infrastructure projects, like San Juanico Bridge and Lung Center of the Philippines, and none to the pockets of the Marcoses.