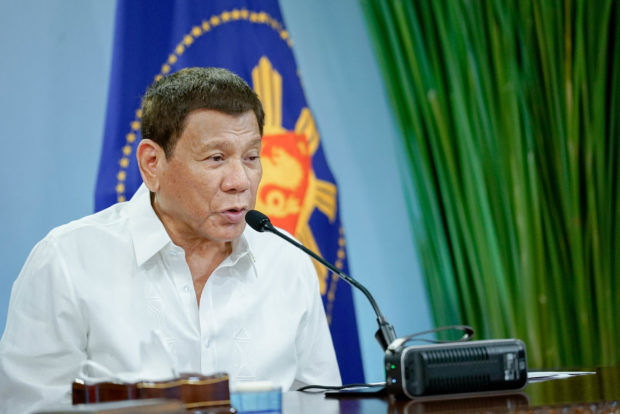 President Duterte’s “interest” in another high-ranking position is only fueled by a “lust for power and fear of retribution,” a member of the House of Representatives said on Friday after the 76-year-old leader said he would run for Vice President in next year’s election “to maintain equilibrium.”

“I thought the President will resign if he fails to keep his campaign promises in three to six months? I thought he was already tired of his job? Now he has a sudden interest in being Vice President,” said Magdalo Rep. Manuel Cabochan III, a former Navy intelligence officer who joined the Oakwood mutiny in 2003.

“That [only] boils down to two things: lust for power and fear of retribution,” Cabochan said in a statement. “Both are wrong. Let’s not add to the drama and fooling people.”

Mr. Duterte surmised that floating his possible candidacy was part of “political posturing” so he would not be “treated badly” as he nears the end of his term as the country’s Chief Executive. He earlier said he would support the bid of House Majority Leader Martin Romualdez for Vice President in next year’s polls.

But presidential spokesperson Harry Roque Jr. also earlier said that the President had tasked Energy Secretary Alfonso Cusi to rally members of the Partido ng Demokratikong Pilipino-Lakas ng Bayan (PDP-Laban) behind a ticket that would include Mr. Duterte as Vice President and his daughter, Davao City Mayor Sara Duterte, as President.

Cabochan warned that Mr. Duterte and his allies are scrambling for ways to preserve their political leverage in the face of possible prosecution after the President steps out of office in June 2022.

Bayan Muna Rep. Ferdinand Gaite agreed with Cabochan but argued that Mr. Duterte’s candidacy “would be more of a liability than a boost.”

“That tandem would carry the public’s disappointment and exhaustion from Mr. Duterte’s leadership … The President will be just excess baggage for his running mate,” he said.

Gaite said it was “clear that Mr. Duterte’s goal in running is to escape accountability for the cases waiting for him, especially the investigation of the International Criminal Court on the bloody war on drugs.”

Who will be his president?

Former Speaker and Taguig-Pateros Rep. Alan Peter Cayetano, for his part, said he would respect Mr. Duterte’s decision if he pushes through with his intent to run as Vice President.

Cayetano earlier advised Mr. Duterte to take on the role of an “elder statesman,” like former President Fidel Ramos, instead of gunning for the second-highest post in the land.

“Having said that, we have to respect that when he said he might run. And everybody has the right to run [for public office]. There’s no doubt in my mind he will be a good Vice President. The question will be, who will be his President?” the lawmaker said on Friday.

As to the rift within the PDP-Laban between the President and Sen. Manny Pacquiao, the party president, Cayetano said Pacquiao might have only wanted to help Mr. Duterte expose corruption. INQ