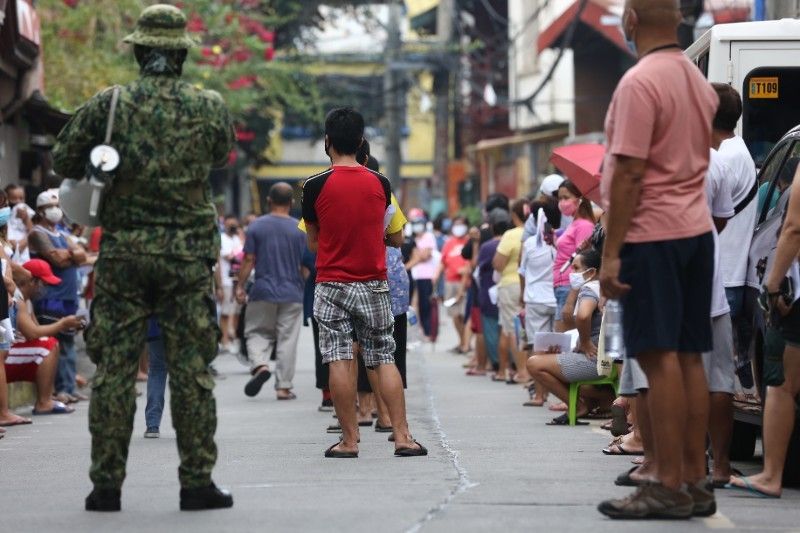 MANILA, Philippines — Academics cast fear over what they said was the blow to human rights caused by the “explosive cocktail” of the global drive to counter-terrorism coupled with the Philippine government’s “autocratic instincts and violent tendencies.”

Researchers Aries Arugay, Marc Batac and Jordan Street expressed concern over the potentially “damaging effects on conflict dynamics, civic space and the democratic freedoms of Filipino citizens” moving forward, pointing to the global war on terror’s “patterns of failure” where “civilians continue to bear the brunt of the violence.”

The research, done in cooperation with Initiatives for International Dialogue, pointed to the highly contested Anti-Terrorism Act, seen by many as the latest move by Filipino authorities to use countering ‘terrorism’ as the pretext to limit dissent and undermine democracy.

In Duterte’s Philippines, the communist insurgency is the boogeyman — right along with the illegal drug trade as public enemy number one. The president’s nightly addresses feature lengthy asides that see the chief executive railing against left-leaning activists and drug suspects alike.

“Through the dramatic militarisation of civilian governance structures, President Duterte has weaponized counter-terrorism to pursue a narrow, securitized political agenda that is having widespread impacts on peace and human rights,” the paper read.

“The increase in human rights violations, the shift away from democracy and towards authoritarianism, and the increasingly hostile approach towards armed groups in the 2000s had many interconnected roots. But none of them were as important as the authorities’ seizing upon and imposing counter-terrorism measures in the Philippines.”

‘Crackdown on opposition and dissent’

Echoing critics of the measure, the group said that the Anti-Terror Law adopted an “overbroad definition of what constitutes ‘extremism’ and radicalism,” which only led to a crackdown “targeting student groups, dissenting movements and certain minority groups” that constituted “government efforts to label ‘terrorists’…as enemies of the state.”

“The criteria used for assessing ‘radicalization’ include an individual’s political persuasion, religious belief, or education institutions where they study,” the paper read.

State forces continue to defend what progressive groups say is a crackdown on left-leaning activists, going as far as implying that the targeting of activists and government critics in many police operations is a mere coincidence.

In operations claiming to be anti-terrorism efforts, members of progressive groups continue to be jailed or shot, which rights groups have said is a sign of a “creeping martial law.”

It’s not just left-leaning activists: Saferworlds said that rampant securitization plays a role in dividing society and discriminating against minority communities, who “often find themselves in the crosshairs of conflict and at the receiving end of harassment from both violent groups and security forces alike.”

More than just the Anti-Terrorism Law, the group said that Executive Order No. 70, which created the National Task Force to End Local Communist Armed Conflict and instituted a “whole of nation” approach against the communist insurgency, was “largely dictated by elements of the military establishment.”

“This unconditional order is believed to have been strongly influenced by the military establishment’s enduring interest in taking advantage of the current administration’s subservience to their goals,” they said.

“The Duterte administration’s inability to impose democratic civilian control has put the military in the driver’s seat in this anti-communist drive. With both retired and active generals leading on implementation, the military is determined to put a violent – rather than negotiated – end to one of the world’s longest-running Maoist-inspired insurgencies.”

To recall, Duterte formally ended peace talks with the National Democratic Front in 2017 following on-and-off negotiations where both parties could not settle on a venue.

The researchers also pointed to the detrimental effect of heavy security measures on genuine developmental measures which can, in turn, boost national security.

“In a country with a long history of internal violent conflict, the push to treat political insurgencies as ‘terrorism’ is closing the space for many developmental and peacebuilding-based responses,” the paper reads.

As a result, even basic engagement with communities around the country, perceived threats are tackled through the lens of “hard security narratives.”

“This is not providing security, but instead driving and enabling rising levels of conflict and repression,” the paper said.

The researchers said that even sources from inside the Duterte administration have observed “a lack of diverse perspectives in peace and security policy circles and an absence of debate on policy direction” when it came to the “military-first approach.”

This approach has translated well into the administration’s pandemic response, too, which has drawn criticisms of being draconian and militaristic.

In separate periods throughout the more than two years of quarantine in the Philippines, thousands of cops were deployed in the streets to enforce health protocols. Violators who were caught going against these were thrown in jail.

With a litany of former military generals littering the coronavirus task force, enforcement has been the norm over the past 474 days of community quarantine, with police leadership justifying it as a “health measure.”

And even amid the coronavirus pandemic, anti-insurgency efforts are center stage in Duterte’s administration, with operations carried out often by state forces.

“Authorities are securitizing engagement with many communities in the country, tackling perceived threats through hard security narratives, policies, interventions, and partnerships,” the researchers said.

“This is not providing security, but instead driving and enabling rising levels of conflict and repression.”

The discussion paper recommended “a significant change in approach by security and development partners in the Philippines,” stressing “it is not too late to reverse securitization and militarization.”

First and foremost, Saferworld said, engagement with those affected on the ground should “be central and primary” to efforts at building lasting peace.

The researchers also called on non-government and civil society organizations to “promote human security and reassert democratic norms, and opt out of supporting securitized efforts” in their projects.

On the part of the government, efforts at preventing or countering violent extremism “should include a conflict sensitivity assessment and a gender analysis in the design, implementation and evaluation phases.”

“Programming should focus on upholding international human rights standards rather than undermining them. Where this cannot be guaranteed, projects should be suspended until the human rights situation is addressed,” it said.

It also reminded implementing organizations that “those working to build peace and prevent violence cannot be neutral about an agenda that is causing significant human rights harms, exacerbating conflict and derailing peace processes.”

— with a report from Jonathan de Santos