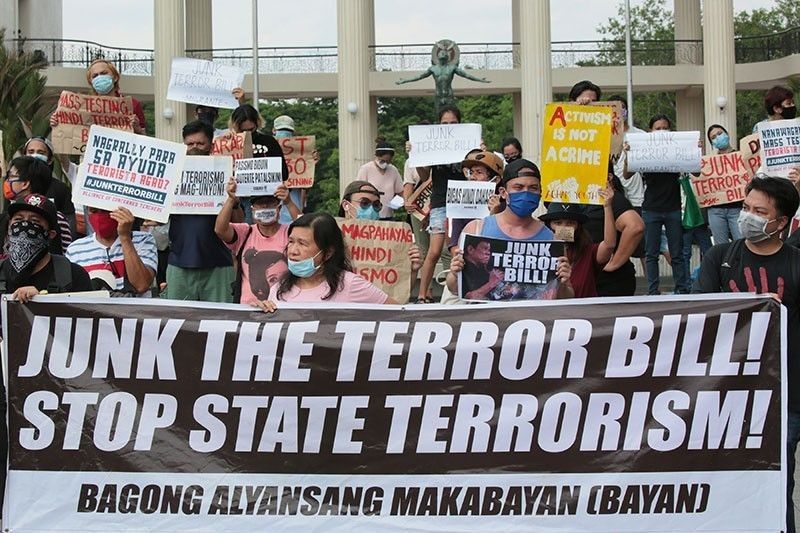 MANILA, Philippines — Peace consultant Rey Claro Casambre has been detained since 2018 for a crime that he said he did not commit. While in jail, he found himself being accused in May of being a terrorist.

Casambre was first included in the 2018 Department of Justice petition for proscription but was later dropped from the government’s long list. In 2021, he saw himself again labelled as a terrorist — and with the new law in effect, what few assets he had were frozen, leaving his family in anxiety.

“Freezing my father’s and others’ almost negligible accounts purportedly to cripple the communist movement is pathetic. Instead, it has deprived my elderly parents of their funds for essential needs, magnified the crisis of the pandemic, and is bringing anxiety to our family and friends,” Casambre’s daughter, Xandra Bisenio, told Philstar.com in a statement.

Amid mounting opposition and while the country grappled with a raging pandemic, President Rodrigo Duterte signed Republic Act 11479, or the Anti-Terrorism Act of 2020 (ATA), on July 3, 2021.

The signing led to one of the biggest protests at the University of the Philippines in Diliman, Quezon City during a months-long lockdown in Metro Manila.

Thirty-seven groups from different sectors of the country — from Framers of the Constitution, legal luminaries and law professors to students and even social media influencers — fired legal challenges against the law. Among them is Casambre.

The Anti-Terrorism Council (ATC) in a resolution issued December 2020 designated the Communist Party of the Philippines and its armed wing, the New People’s Army, as terrorist groups.

The designation triggered the authority that the ATA gives the Anti-Money Laundering Council to freeze the assets of a designated person or group.

Bisenio shared they experienced the adverse impact of this shortly after the designation was made public. In May, she said they “attempted, as was usual, to withdraw cash from Mr. Casambre’s ATM account to pay for some groceries, and got the message: ‘The account does not exist.’”

The family obtained copies of official bank documents of her father’s accounts as being frozen on June 16.

Bisenio continued: “It is doubtful they had as much as lifted a finger to determine whether such ‘assets’ were actually being used to finance or support terrorism as they allege [since they have publicly disclosed] neither supposed evidence nor proof.”

She asserted that the money in her father’s bank accounts is accumulated savings from allowances from a non-government organization he worked for for three decades, honoraria from speaking engagements and cash gifts from relatives in past holidays.

Fruit of a poisonous tree

Under the law’s Implementing Rules and Regulations, designated terrorists may file a verified request for delisting with the ATC within 15 days of publication of the lists. The appeal may be filed more than once depending on the applicable grounds of delisting, but once denied the next request can only be filed six months later.

The ATC resolution designating Casambre and 18 others were published in newspapers on May 13, but Justice Undersecretary Adrian Sugay, who is also ATC spokesperson, said that the council had yet to receive any request for delisting as of June 21.

With no requests filed, Sugay said “it may be reasonably presumed that they have waived” their right to contest the terrorist tag. He acknowledged that the people the council designated can still seek judicial remedies.

But Bisenio hit the DOJ’s statement that she said suggested “as though silence were an indication of guilt.”

“The ATC designation is the fruit of the poisoned ATA tree. Why and how would one seek or expect relief from a toxic brew by consenting [to] more of it?” she said.

The request for delisting is not part of the law, but was included in Rule 6.5 of the Implementing Rules and Regulations, the guidelines on how the executive branch will apply the law. Sugay earlier explained that the ATC’s internal mechanism on the designation “also contains provisions [regarding] delisting,” but he noted that these rules are confidential.

It is yet unclear whether the same panel that designated the personalities as terrorists would evaluate requests for delisting or if hearings would be conducted.

The DOJ official said they are “proposing a few additional provisions and this will hopefully be taken up during the next ATC meeting.”

Hope remains at the Supreme Court

In less than 24 hours after the Palace announced the signing of the ATA, the first legal challenge was lodged before the country’s highest court.

In the succeeding weeks, the high court saw dozens of different groups trooping to their gates at Padre Faura to urge the SC to strike down the law as unconstitutional for infringing on people’s rights.

In the span of nearly four months, the SC held nine settings of oral arguments on these 37 legal challenges. Petitioners filed their memoranda earlier this week, but it is unclear whether the OSG has already submitted theirs.

A year since the law was signed, the SC has yet to issue a Temporary Restraining Order on its implementation as petitioners have asked.

Peace consultants like Casambre have, in the meantime, been designated as terrorists, counsels for petitioners have reported attacks and intimidation and the red-tagging of progressives has continued.

Bisenio, however, vowed that while her father’s designation and subsequent freezing of assets have left the family deprived of funds, magnifying the effects of the pandemic on their family, their commitment to helping others continues undiminished.

“Despite all this, we want the ATC to know that in our family’s case, our real assets, our most valued possessions, the source of our joy, security and peace of mind cannot be found in any bank or monetary institution,” she said.

“They lie in our lifetime commitment to serve the common good, in solidarity with the downtrodden who are the real giants and heroes in this world. Intangible yet real and vibrant, these treasures are inextricably embedded in our minds, beyond the reach of any state entity, and silently but fiercely ablaze in our hearts, which no statute can ever freeze,” Bisenio also said.