A war without the rubble: Marawi a year after

Rohaina Magarang walks down a few steps from Tent No. 2136 in Sarimanok II Tent Shelter to check on her father. The elderly man, paralyzed from the waist down, has just been transferred to the shelter in Marawi from a hospital in Cagayan de Oro. Camp authorities refuse to give aid to ailing evacuees unless they’re brought to the shelter, so Rohaina saved all the money she could to afford transportation expenses.  The old man tries to tell something to his daughter but has difficulty in doing so. He breaks down in tears. Rohaina elicits the same response.

Like thousands of displaced Moros following the war between elements of Daulah Islamiyah and the Armed Forces of the Philippines, Rohaina is hopeful that her family could set foot in war-torn Marawi once again. Life inside the tents can be dreary.

“Food rations will run low again, now that Ramadan is over” Rohaina says.

Eid’l Fitr has just passed, and while the three-day tradition is marked by lavish meals, gift-giving, and grand festivities, the families inside the tent shelter shared a modest iftar at sundown.

Rohaina recalls that last year, it was days before the start of the Holy Month of Ramadan that the fighting in Marawi began. Displaced Muslims spent Ramadan and Eid’l Fitr in evacuation centers, many of them separate from their families. One year on, they have not yet returned to their homes.

The government says many of the internally displaced persons have returned to the 24 barangays in Marawi most affected by the siege. Task Force Bangon Marawi pegs the number of displaced families at 42,252, with 45 evacuation centers still in operation. More are staying with relatives in home-based centers across the Lanao provinces.

From professional and middle class workers, they are relegated to receiving food aid from the government and from non-government donors. Some tents are shared by two or more families. The evacuees have resorted to generating different kinds of livelihood to buy soap, matches, and other essentials.

“How do we cope with lack of livelihood in the tent shelter?” Rohaina returns our question. She tells us that she buys malong (traditional wrap-around tubular garments), cuts them to small pieces, and sews them into wallets to sell in the city.

Her husband, Olawan, wants sustainable livelihood for those living in tent cities. “If only the government would provide farming inputs, then we would put our bodies to work. I don’t mind if I’m 60 years old. We are very hungry for any kind of work just so we could send our children to school,” he says.

They are lucky if nearby relatives give them rice, chickens, or vegetables. “If not for their help, we would be eating canned sardines for breakfast, canned sardines for lunch, and some more canned sardines for dinner. I could do that for a week, maybe, but for my family to eat canned food and noodles everyday for a month, no, I couldn’t bear that thought,” one man shares.

Water doesn’t come in abundantly, either. Delivery trucks refill their tanks once every day, not quite enough for the several thousand individuals who cook, bathe, and wash at the shelter. 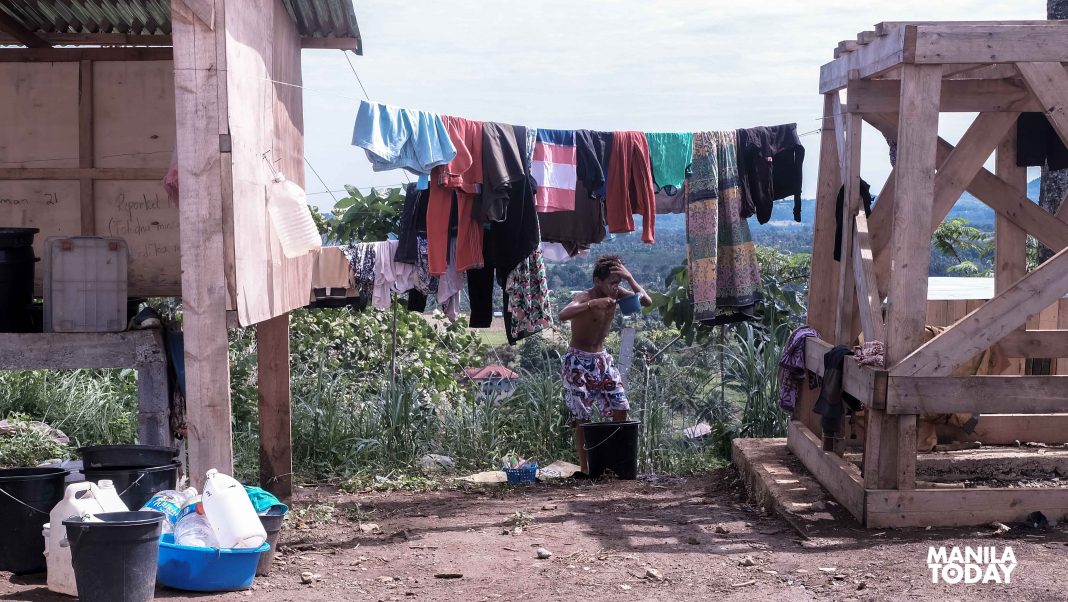 According to Sarimanok II residents, moves are underway to transfer them to relatively stronger housing units like the ones in Sagonsongan, but they want more transparency as to when and how they could relocate.

“We can’t get any sleep when it rains around here. We’re afraid the winds would blow our tents away,” says an elderly man.

Task Force Bangon Marawi has recently presented slides of the master plan for Marawi’s most affected areas, with officials estimating the total rehabilitation cost to be P51.6 billion. President Duterte gave his government a four-year period to complete all rehabilitation efforts in Marawi.

Members of the Maute Group or Daulah Islamiyah burned buildings and houses, but it was the heavy airstrikes by the Philippine armed forces that left the Islamic City in rubble.

Ambitious as they may be, Olawan fears that the government’s “undemocratic” process of rebuilding Marawi will leave the residents behind. They are wary of donations coming in from the U.S. and Chinese governments as these would entail awarding business contracts to them. For so long, Marawi has supported local merchants and their businesses. Foreign establishments could eat up residents’ small and medium enterprises.

Plans for the construction of a military camp are also underway, apart from the existing 103rd Brigade headquarters.

“With most Meranaws not having titles for our properties, how can the government assure us that we would reclaim our land?” Olawan asks, angered at the thought of businesses or the government taking over their ancestral land.

“The Philippine media should hear the stories of the ordinary residents, not just the authorities and the experts,” Olawan adds. “Not everything is well in here.”

Rohaima, Olawan, and the hundreds of thousands of displaced residents of Marawi may have come out of the crossfire alive, but their everyday struggle for food, livelihood, and adequate shelter — for their fundamental rights and dignity — is a battle they continue to wage.

The post A war without the rubble: Marawi a year after appeared first on Manila Today.