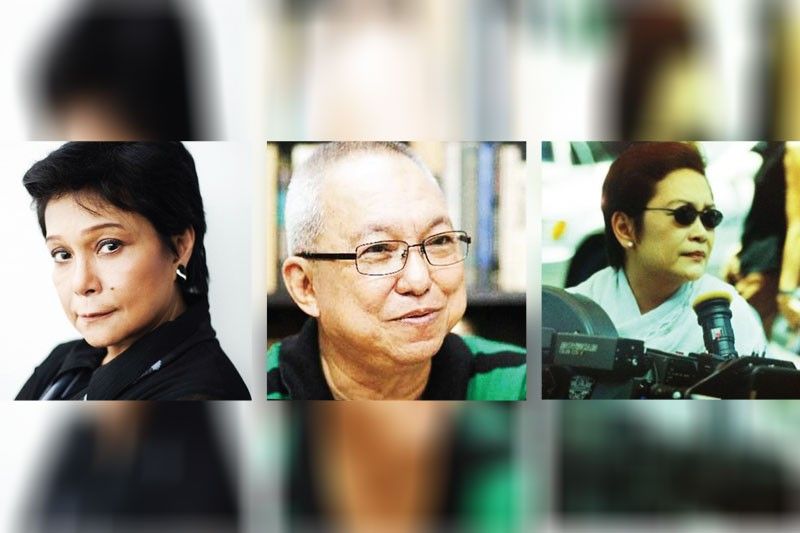 MANILA, Philippines — The film community has celebrated the recent announcement of three “historic” National Artists for Film and Broadcast Arts. Actress Nora Aunor, screenwriter Ricardo “Ricky” Lee and the late director Marilou Diaz-Abaya were named new recipients of the highest national honor given to Filipinos who have made distinct contributions to Philippine arts.

Upon the joint recommendation of the Cultural Center of the Philippines (CCP) and the National Commission of the Culture and the Arts (NCCA), Malacañang also declared on Friday night five other National Artists, namely, Agnes Locsin for Dance, Salvacion Lim-Higgins for Design (Fashion), Gemino Abad for Literature, Fides Cuyugan-Asensio for Music and Antonio “Tony” Mabesa for Theater.

Diaz-Abaya was cited posthumously for forming part of the country’s “Second Golden Age of Cinema” via TV and film works like Brutal, Moral, Muro-Ami and Jose Rizal, that “probe human experiences drawn from social conflicts among characters of contradictory beliefs and value systems.”

Aunor — Nora Cabaltera Villamayor in real life — was recognized for her depiction of “Filipinos’ everyday realities and aspirations in some of the most important Filipino films” such as Himala, Tatlong Taong Walang Diyos, Minsa’y Isang Gamu-gamo and The Flor Contemplacion Story.

Lee, on the other hand, was awarded for being a prolific screenwriter for film and TV, playwright and fictionist, who penned iconic works that became part of the “Second Golden Age of Philippine Cinema.” He’s known to have written over a hundred films, including such classics as The Flor Contemplacion Story, Anak, Moral, Karnal, Sa Kuko ng Agila and Himala (his celebrated movie starring Aunor, which incidentally is marking its 40th year).

In a statement sent to The STAR, Lee said he felt both honored and humbled by the award. “Honored because it is in a way an affirmation that I have been doing something of service to others and humbled because I know that I should do more, write more,” he added.

Aunor, on the other hand, thanked people who fought for her inclusion. The veteran actress was left out in previous selections — in 2014 and 2018 — due to supposed links to drug issues.

Meanwhile, members of the film community, including the Directors’ Guild of the Philippines, Inc. (DGPI), have called the declaration a “truly historic milestone for Philippine cinema.”

DGPI president Paolo Villaluna told The STAR that the three icons, whose “individual body of work has impacted Philippine cinema and changed its very fabric,” are “truly deserving” of the honor.

He noted that Aunor and Diaz-Abaya being honorees highlighted the evolution of the award-giving body itself as “prior to this, selection of National Artists for Film and Broadcast Arts was limited to directors and male recipients.”

“The acknowledgement of director Marilou Diaz-Abaya and Ms. Nora Aunor, whose contributions to cinema stand shoulder-to-shoulder with their male counterparts, disabuses the notion that Philippine Cinema is a boy’s club,” Villaluna added.

As for Lee as National Artist, the filmmaker said that while “canonically, we’ve attributed the ‘Second Golden Age of Philippine Cinema’ to its films and directors… His win is a reminder that cinema isn’t just for directors.”

FDCP chair and CEO Liza Dino also hailed the proclamation of three National Artists for Film as “inspiring news for all of us in the industry.”

“Though we all work hard here for the love of the craft, for the upliftment of film workers in the Philippines, or just to have a means of livelihood — this affirmation is a boost to the morale of the film sector who has been recovering not just from the economic ravages of the pandemic, but also from the years of neglect. We, as a sector, are being seen,” she further said.

The selection goes through a tedious process of three rounds, which starts with a nomination based on life’s work and endorsements. All rounds involve a panel of experts, including peers from each discipline, with the third one featuring a voting panel that consists of the joint boards of the CCP and the NCCA board, plus all the living National Artists.

According to the NCCA website, recipients are entitled to the following privileges: the rank and title of National Artist; gold-plated medallion minted by the Bangko Sentral ng Pilipinas (BSP) and citation; and a lifetime emolument and material and physical benefits comparable in value to those received by the highest officers of the land.