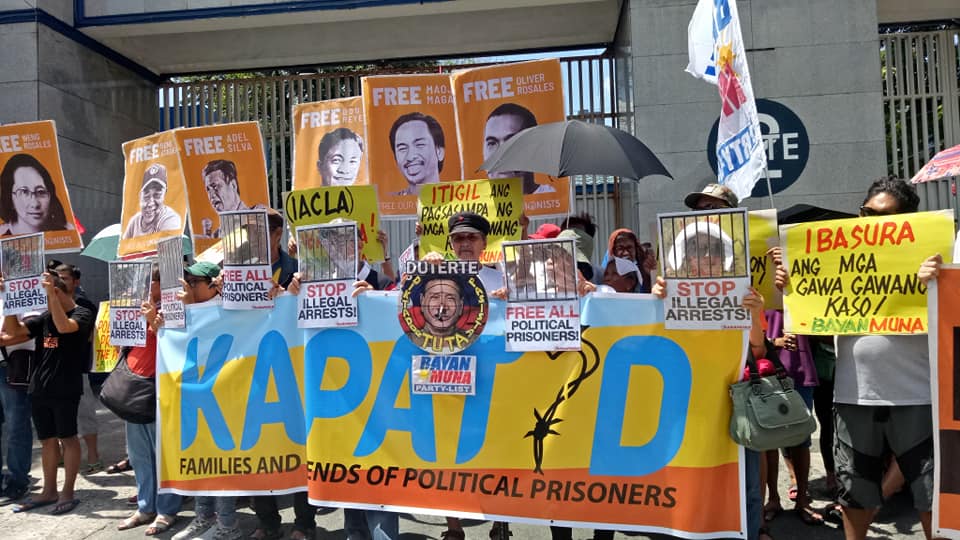 “We plead for you to spare him from a truly life-threatening possibility of a coronavirus outbreak behind bars. We appeal that your decision be on the side of just compassion.”

In a statement, Karapatan Secretary General Cristina Palabay said, “We are racing against a timebomb and with every day that passes where vulnerable detainees are kept behind bars, the threat of the COVID-19 pandemic grows deadlier in our congested prisons. The government has a duty to uphold the life and security of prisoners and we cannot afford to lose more lives.”

The Bureau of Jail Management and Penology (BJMP) has expressed support to the demand for temporary release of inmates if there would be a court order.

Just last week, the House of Representatives’ Committee on Justice has recommended the temporary release on bail prisoners, particularly the elderly, those with medical conditions and first time offenders. The said recommendation was also supported by the Department of Social Welfare and Development.

Kapatid, an organization of families of political prisoners, said that no jails are 100 percent safe from COVID-19, thus their call for the swift action of the agencies in charge of the release of the prisoners.

Kapatid Spokesperson Fides Lim said that while they welcome the assistance of International Committee on the Red Cross by setting up isolation tents for the BuCor and the BJMP, she said “these facilities will not be sufficient to contain the rapid spread of the contagion given the increasing numbers of prisoners falling ill in congested jails and the fact that no extensive testing has even started to identify the carriers who may be asymptomatic.”

Lim said they have written BJMP Chief Gen. Allan Iral and BJMP Legal Head Michael Caceres to immediately draw up lists to identify the prisoners who are at-risk to prioritize for temporary release. This is while awaiting the decision of the Supreme Court on their petition and also in view House Committee on Justice’s recent recommendation.

“We also want to be assured that the political prisoners shall likewise be included for processing for release, in line with the call of the UN High Commissioner for Human Rights stressing the inclusion of political prisoners in humanitarian releases during this period of public health emergency,” the group said in their letter to the BJMP.

Kapatid also appealed to BuCor Director General Gerald Bantag and the Department of Justice “to do the same and to fast-track the paperwork for those already long eligible for release and parole as well as the elderly and the very sick, with clear and transparent guidelines.”

Appeals to the Supreme Court

Other relatives appealed for Supreme Court’s “just compassion” amid the pandemic.

In a letter of appeal to the high court, Nona Andaya-Castillo, wife of political prisoner Ferdinand Castillo said that under lockdown, “his medical condition and special needs become more arduous to attend to, amplifying his vulnerability to possible infection with COVID 19.”

Xandra Liza Casambre Bisenio, daughter of peace consultant Rey Claro Casambre, also wrote an appeal to the SC expressing their concern for her 68-year-old father who suffers from type 2 diabetes and a heart ailment.

“There is a general lack of jail space and facilities for social distancing, proper nutrition to put up resistance against the virus, prompt testing of prisoners and jail employees with COVID-19 symptoms to enable ample isolation, quarantine, and treatment for the infected and the safety of those who are not,” she said.

Both urged the government to act swiftly on the recommendation of the House Committee on Justice.

“We urge the leaders of all branches of the Philippine government to expedite measures for the massive” release of prisoners, especially the elderly, sickly, pregnant and nursing mothers – or those most vulnerable to contracting COVID-19,” Bisenio added, saying that they hope that the Philippines will follow countries who have released prisoners.

“Your action upon this matter carries the hope of my family, as well as my father’s continuing life purpose as a peacemaker. We plead for you to spare him from a truly life-threatening possibility of a coronavirus outbreak behind bars. We appeal that your decision be on the side of just compassion,” she said.