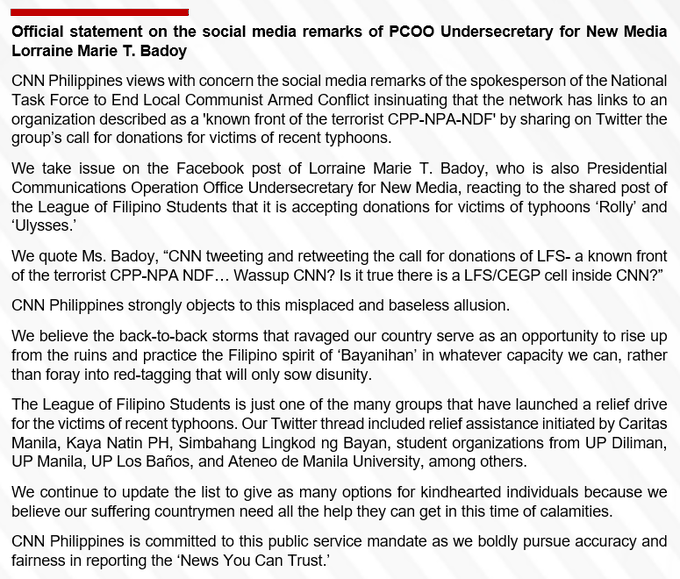 MANILA, Philippines —  CNN Philippines “strongly objects to the misplaced and baseless allusion” of Undersecretary Lorraine Badoy of the Presidential Communications Operations Office (PCOO) to its alleged links to organizations that are “known fronts” of the Communist Party of the Philippines, the New People’s Army, and the National Democratic Front — usually referred to collectively as the CPP-NPA-NDF.

CNN issued a statement on Saturday in reaction to Badoy’s Facebook post on Friday: “CNN tweeting and retweeting the call for donations of LFS- known as the terrorist CPP-NPA-NDF… Wassup CNN? Is it true there is a LFS /CEGP cell inside CNN?”

LFS and CEGP stand, respectively, for the League of Filipino Students and the College Editors Guild of the Philippines.

In reaction, CNN Philippines said:  “We believe the back-to-back storms that ravaged our country serve as an opportunity to rise up from the ruins and practice the Filipino spirit of Bayanihan in whatever capacity we can, rather than foray into red-tagging that will only sow disunity,”

The media outfit pointed out that LFS was not the only group included in its Twitter thread for donation drives.

Badoy, who is also the spokesperson of the National Task Force to End Local Communist Armed Conflict (NTF-Elcac),  has recently clashed with members of the Makabayan bloc in the House of Representatives.

The lawmakers had called for her resignation for red-tagging them.

Badoy rejected the call, saying that she “did not deceive the Filipino people.”#