Community pantries sprouting all over 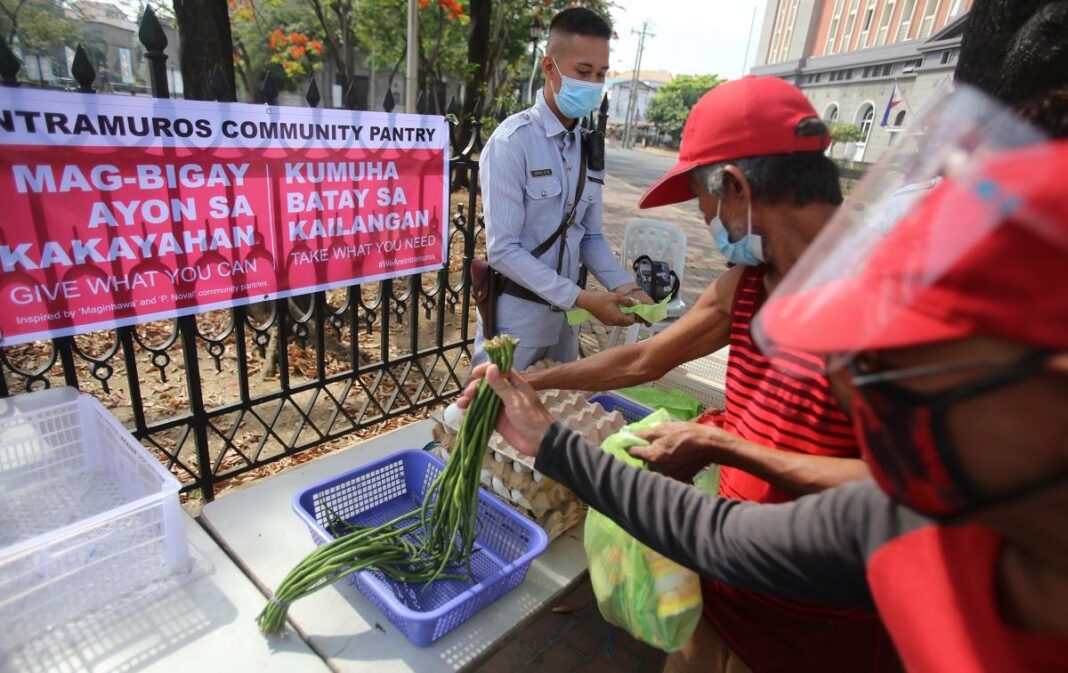 From the first community pantry on Maginhawa Street, Quezon City, dozens more have opened not only in Metro Manila, but also in some Luzon provinces, the Bicol region and in Mindanao, prompting Caloocan Bishop Pablo Virgilio David to call it “the most tangible sign of hope.’’

In Iligan City, Lucia Silva launched on Sunday her version of young entrepreneur Ana Patricia Non’s Maginhawa community pantry at Purok 5 in Sitio Canaway, Barangay Saray, where many had lost their jobs.

“Most of the residents in this community are construction workers, sikad and jeepney drivers, laborers, sidewalk vendors and fishermen who were affected by the pandemic,” the 23-year-old Silva said.

Since many people in the city were Muslims, she urged donors to make sure that the food they would drop off were “halal” and free of pork or pork derivatives.

Silva said that her pantry was stocked with vegetables, eggs, noodles, and other dry goods: All donations were from personal and virtual friends who learned of her initiative from her social media post.

“We did not have any problem dealing with [the residents who lined up] because they were very disciplined. Although they were allowed to get as many [items] as they could, they preferred to get only a few to leave something for others,” she added.

According to Silva, she will continue to accept donations, in cash or in kind, although she encouraged people to bring their goods directly to the area and leave them on the table set up for the purpose.

In Barangay Tipanoy, also in Iligan City, store owner Manuel Jabay Jr., who was inspired by what he read online about the Maginhawa initiative, also put up a community pantry outside his store.

Jabay said he took advantage of his rest day to repack rice, noodles, canned goods, and juice drinks and displayed it outside, for neighbors — mostly senior citizens — to bring home.

“Tomorrow I will set up another community pantry. I am putting out the rice which I repacked today,” he said.

Another pantry also opened at the site of the Roxas night market in Davao City, with the organizer encouraging people to help those in need by sharing their blessings.

“Just drop off your goods such as rice, vegetables, fruits, bread, canned goods [in] baskets or ask [for] assistance from [our] staff,” Mary Ann Medina, the owner of Juice Cubi milk tea products, posted on social media.

She told the Inquirer that they had set up the pantry to respond to the call for people to help each other amid the pandemic.

“I started it with my own display today and my stocks were gone only after a few hours,” she said by phone. “But several people have responded to our call for donations and we will use [these] to purchase more goods to distribute,” she added.

Non’s idea has also spread to Baao town in Camarines Sur, where the owners of Bushido restaurant have opened a community pantry outside their establishment in Barangay Del Rosario.

“There is one thing more contagious than [the] virus which is hope,” they said in a Facebook post. “The pantry is open for all Baaeños who are in need of help. Food donations are also welcome here.”

A group of concerned citizens likewise opened their version of the Maginhawa pantry at the San Miguel barangay hall in Puerto Princesa City, Palawan’s capital.

Russel Fernandez and Katrina Lucena, two of the organizers, said they had adopted Non’s motto of “Magbigay ayon sa kakayahan, kumuha batay sa pangangailangan (Give what you can, take what you need)” for their project which was open to the needy as the city faces a surge in COVID-19 cases.

For Jade Dungo, a business owner in Paniqui, Tarlac province, putting out a food cart filled with eggs, canned goods, bananas, sugar, sweet potatoes, instant noodles, rice and vegetables was their way of giving back to the people.

“We are all affected [by this pandemic] but some of us are still well-off. Life is full of ‘give-and-take’ and that’s literally what is happening. Some people will donate food and others will [benefit from the] bounty,” Dungo told the Inquirer.

In Bulacan province, similar community pantries have also sprung up in several towns.

Benice Pulumbarit of Malolos City on Saturday put up a makeshift store she called the “Kenyos Community Pantry.”

In Plaridel town, vendor Jepoy de Leon also gave out free vegetables to people in need, saying the example set by the Maginhawa community cart had motivated him to do the same.

“Thank you Lord for using us to become your instrument to help others,” De Leon said in a Facebook post.

In Pulilan town, a group of men called the “Backliners Pulilan” has copied Non’s idea in their village in Paltao. Although most of them were jobless and only a few were working, they said they were inspired by Non.

Back in Metro Manila, Allia Acosta had set up another pantry on Mother Ignacia in Tomas Morato, Quezon City, and despite her initial worries that the initiative might not be sustainable.

But since then, donations have been pouring in—and a kind stranger has even put up a new rack and cover for the goods.

“It really makes you tear up,” Acosta said in a Facebook post. “The public is really amazing.”

In Los Baños, Laguna, Ja Abdel became emotional after hearing that some children had taken to convincing their parents to donate to the pantry she had set up in the community.

“We are not just fighting COVID-19 now. [We are also combating] hunger, poverty and illness,” she said. “This community pantry is helping us address [these things].”
Civic groups have also pledged to contribute to the pantries.

Anakpawis and Kilusang Magbubukid ng Pilipinas have also set up their own community pantry at Pook Amorsolo in Barangay UP Campus, an impoverished community within the state university’s grounds.

In his homily at San Roque de Caloocan Cathedral, Bishop David lauded the Maginhawa community pantry for being “one of the clearest and most tangible signs of hope in the midst of the hopelessness” brought by the pandemic.

The bishop, a critic of the Duterte administration’s war on drugs, noted that the cardboard signs displayed in these pantries “[would] forever erase the shame of the cardboard [signs] hung by killers on the thousands of people they have killed in the past few years.”

David called on Filipinos to continue putting up community pantries whenever and wherever they could, and reminded the faithful that “we are gifted to give.”

“Within just a few days, one little experiment has multiplied itself exponentially. Please, let us not allow it to fizzle out; this is perhaps the best chain reaction I have ever heard of in this time of crisis,” he said.

On Sunday, the San Roque Cathedral partnered with Caloocan Young Leaders Initiative, a youth group based in the city, to open its own community pantry at the cathedral on A. Mabini Street.