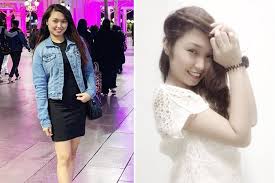 Other than sharing about her work-related stress, slain overseas Filipino worker Mary Anne Daynolo did not give any indication to her family that she was in danger or faced any kind of threat in their last conversation before she went missing in the United Arab Emirates (UAE) last March 2020.

UAE police found Daynolo dead 10 months later, on January 19, after the suspect – Daynolo’s colleague – led them to her remains. The family Daynolo left behind wants justice for the 29-year-old receptionist.

In a phone interview with Rappler. Daynolo’s half brother Cedric Madrigalejo shared what he and her sister talked about in what was to be their last chat via social media.

“I didn’t see signs of danger, threats, or her asking for help. Wala. Sobrang casual lang na asaran and kamustahan (Nothing. It was very casual, we were teasing and catching up with each other),”

Daynolo made plans to come home and surprise the family in July 2020, and treat them to a trip to Baguio, Madrigalejo said. She never did, and was flown home in a box 10 months later.

The Department of Labor and Employment offered the family burial and livelihood assistance. The National Bureau of Investigation is conducting an autopsy on Daynolo’s remains to confirm her identity and cause of death.

Madrigalejo’s last conversation with Daynolo was on the day before her sisted went missing. He said the conversation was “unusual,” since he rarely had long conversations with her about how she was doing. They would usually interact through simple reactions on social media posts.

This time, she confided in her brother at length, telling him how exhausted she was with her work.

Next thing the family knew, she was reported missing on March 6, 2020.

In the months of Daynolo’s disappearance, Madrigalejo said the family exhausted all possible efforts to track her down. She went missing just as the coronavirus pandemic began and the Philippines started imposing hard lockdowns.

They emailed the Department of Foreign Affairs (DFA), the Overseas Workers Welfare Association (OWWA), and even politicians like Senator Bong Go, but none replied, Madrigalejo said.

The family was in constant communication with relatives in the UAE, who also followed up with police handling her case abroad. The case was made known to the Philippine Overseas Labor Office (POLO) and the Philippine Embassy. All they could report was that they, too, were waiting for updates from law enforcers.

In those months, there were no updates that gave them hope.

“Yung mga first weeks…may nakapulot ng phone niya, may nagbalik sa hotel. Pero yung mga leads, suspects, walang ganoon (In the first weeks there was an update that someone found her phone and brought it to the hotel. But with regard to leads, suspects, nothing),” said Madrigalejo.

(Our relatives told us that the laws, regulations in the UAE are different [from ours]. There, unconfirmed details are really kept, and they could not share them with even family members or they could be sanctioned.)

When asked, Madrigalejo said that the DFA had asked the family what assistance they needed, and agreed to extend legal assistance as the family pushed for the resolution of Daynolo’s case.

Before flying to the UAE in February 2018, Daynolo worked as a receptionist in a condominium in the Philippines. Madrigalejo said she decided to work abroad because she was frustrated with the working conditions in the Philippines.

The asthmatic Daynolo had to deal with a horrible commute, and low wages when she worked here.

Madrigalejo said she was a sister who was very decisive, independent, and did not want to share her problems with the family.

“She doesn’t really say I love you. She only says, ‘Alam mo na ‘yun (You know that already).’ She doesn’t talk about her problems to us, to our mom. Our mom believes ayaw ni Ate magpabigat (she doesn’t want to be a burden),” he said.

Daynolo spent some years of her childhood away from her half siblings, but eventually returned to her mother and the Madrigalejo siblings. She was the eldest of 3 who remained extremely close despite some years spent apart.

Madrigalejo said Daynolo was not expressive as a sibling but she loved to joke around the most among the 3 of them. He fondly recalled a prank she once pulled – she took their phones and filmed them as they slept – acts that made their familial bond stronger.

He said her last wish was a request for prayers to “get what she deserves.” As the family awaited updates on the murder case from the UAE, they are, in a way, again praying for Daynolo’s last wish to be fulfilled – that she gets the justice she deserves.

(My wish is that this case doesn’t fade away just like that. I don’t want my sister to become just a statistic. I want something out of this – the truth and justice for her.) – Rappler.com

(Editor’s note: An earlier version of this story said Mary Anne Daynolo was reported missing since March 24, 2020. This has been corrected to March 6, 2020.) (PA)