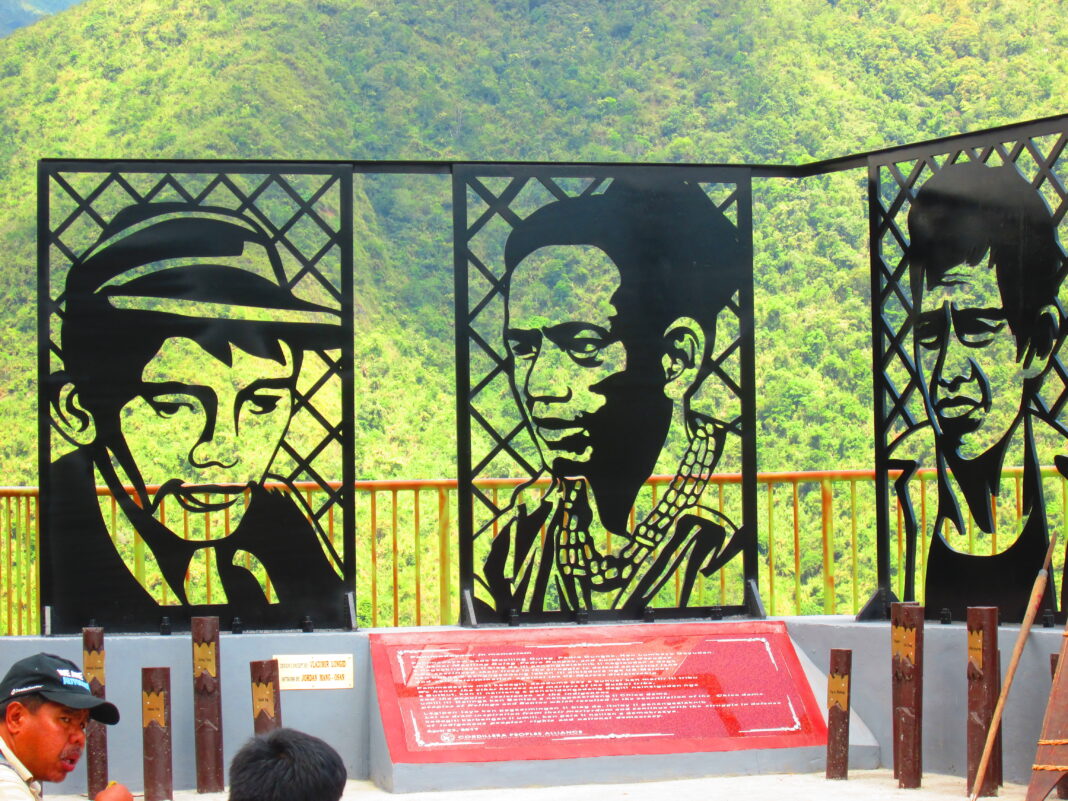 The struggle of the Cordillera people in the martial law era against the proposed damming of the mighty Chico River has again been given its rightful prominence with the restoration of the monument to Macli-ing Dulag and his comrades in its original spot on the Bontoc-Kalinga Road in Barangay Bugnay, Tinglayan, Kalinga.

The restoration was suitably symbolic, held on April 9, the Philippines’ “Araw ng Kagitingan” or Day of Valor. A formal unveiling is being scheduled — a necessary gesture, we agree: to perform the proper steps of ceremony where and when it is due. And Filipinos old and young will hopefully have another opportunity at learning about Dulag, Lumbaya Gayudan, and Pedro Dungoc, who led their people’s resistance in the late 1970s to a dam project backed by the dictator Ferdinand Marcos and which was to have been implemented by the National Power Corp. with funding from the World Bank.

The project involved the construction of four hydroelectric dams that would have displaced more than 100,000 residents of the provinces of Kalinga and Bontoc, and submerged a number of barangays as well as hectares upon hectares of rice fields. In resisting and ultimately stopping the project, the Cordillera people led by Dulag and his comrades defended their ancestral domain and exercised their right to self-determination. It’s a stringent and valuable lesson that other indigenous groups in similarly straitened circumstances nationwide can study and learn.

The Cordillera People’s Alliance (CPA) and the residents of Bugnay built the monument that was “first unveiled in 2017 to honor everyone who gave their lives to opposing the Marcos dictatorship,” according to a report by Inquirer correspondent Kimberlie Quitasol. In October 2020, the Upper Kalinga District Engineering Office of the Department of Public Works and Highways issued the group a notice of demolition, saying the monument constituted a road obstruction. This planned demolition outraged those aware of the monument’s history and drew protest from activist groups and the heroes’ families, particularly in light of the Kalinga Police Office’s alleged earlier receipt from its advisory council a recommendation that the monument be taken down for being “antigovernment.”

Last January, the deed was done: Masked men dismantled the monument’s metal panels featuring the images of Dulag, Gayudan, and Dungoc, as well as the commemorative inscription. The Kalinga police denied involvement in the crime and said it would investigate, but no results have been announced to this day. The act of vandalism on the historic symbol opened old wounds: Those in a position to remember harked back to the night of April 24, 1980, when soldiers attacked Bugnay in the dead of night and killed Dulag as he lay sleeping.

In expressing support and appreciation for the restoration of the monument, members of the Butbut tribe said: “The warm fires of kinship and history of struggle which we share are ablaze again…” The tribe’s statement posted online speaks to the necessity of unity in struggle and of keeping alive the memory of those who rose to the defense of shared values and aspirations: “It shall be through the eyes of our heroes that we shall dream of a life of dignity, justice and genuine peace, and it is with their spirit that we will hammer out and nurture a world for our children. We will not be cut down. Our solidarity that was tested through time will not be silenced by fear.”

In this era where ignorance, revisionism and willful politicking not only give heroes a bad name but also propagate untruth and a cross-eyed (therefore dangerous) perspective on political realities, it is imperative to keep oneself informed and aware. Sen. Bong Go is correct to apologize for saying in a commemorative speech that the hero Lapulapu was actually a Tausug ordered by the sultan of Sulu to check out the newly landed foreigners in 1521 — a claim apparently wistfully intended to bind him and his principal, President Duterte, both of them proud sons of Mindanao, to the chieftain of Mactan who led the resistance to the forces of a colonial power. Contrast his “full respect for history,” as the senator claimed in his online apology, with the ludicrous stance of movie star Robin Padilla, who said, incredibly, that in the absence of a video capturing an event, everyone is entitled to a “point of view” regarding Lapulapu and what transpired in Mactan.