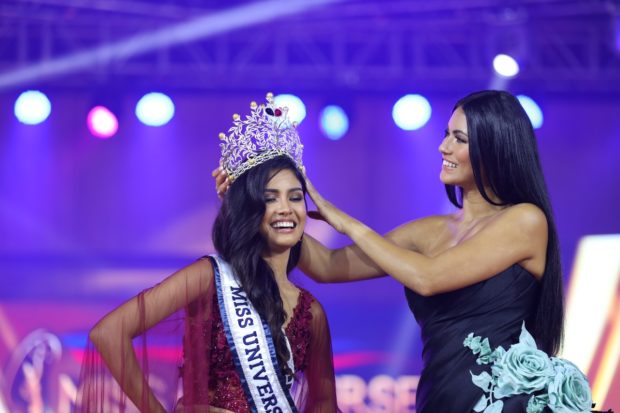 Bohol’s Pauline Amelinckx was named third runner-up while Kimberly Hakenson of Cavite was fourth runner up.

The 22-year-old Mateo, who bested 45 other candidates, will represent the country in the yet to be scheduled Miss Universe pageant

‘Carrying hope and a symbol of light’

During the pageant’s question and answer portion, Mateo was asked where do pageants stand during a  crisis.

“As a candidate, I know I’m not just the face of Iloilo City, but I am here carrying hope and as a symbol of light in the darkest times,” Mateo told pageant host KC Montero.

“And as of the moment, I want to help my community. I want to use my strength to make an impact and that is the essence of a beauty pageant. It gives us the power to make a difference,” she added.

Remembering Miriam: ‘The best president we never had’

Mateo was also asked that should she be given a chance to create a paper currency with the image of any living or dead Filipino, who would it be.

Mateo instantly thought of her fellow Ilongga, the late Sen. Miriam Defensor-Santiago, who she even described as “the best president we never had.”

“For those who don’t know, she was an Ilongga, but what I admired about her is that she used her knowledge, her voice, to serve the country,” Mateo said.

“And I want to be somebody like her. Somebody who puts her heart, her passion into action. And after all, she is the best president that we never had.”

She was hailed Best in Swimsuit in the preliminary competition held on Oct. 21.

Ganados was allowed by the Binibining Pilipinas Charities Inc. to crown her successor.

This was the first stand-alone pageant proclaiming the country’s representative to the Miss Universe pageant, after the Miss Universe Organization announced in December 2019 that that it was parting ways with the Binibining Pilipinas Charities Inc., which had been sending the Philippines’ candidate to the global tilt since 1964.

Pageant in the time of pandemic

The Miss Universe Philippines team originally set the coronation program in May, but the COVID-19 pandemic compelled the group to postpone the ceremonies to June and eventually, October.

In an earlier interview, Lee told the Inquirer that adhering to the health and safety protocols was one of the toughest parts of mounting the national competition.

The delegates, organizers, staff, and crew had to test negative for COVID-19 before heading to Baguio City, and were tested again every five days.

The national pageant organization also embarked on various charity missions to help those who are affected by the pandemic, and invited the delegates to encourage the public to contribute to the causes they choose to champion.