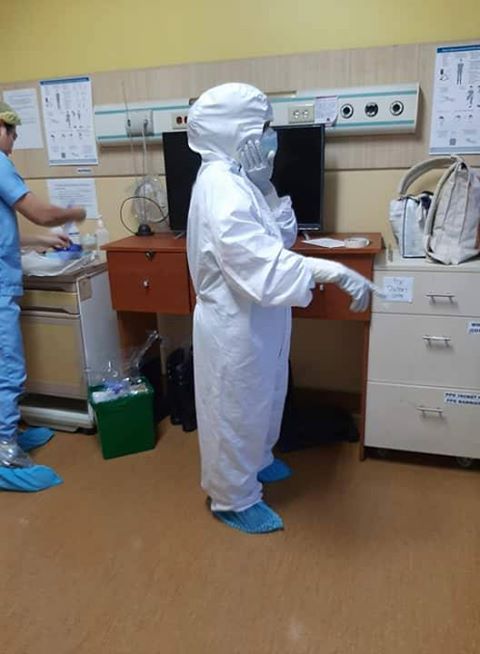 Even before the pandemic, Maristela Abenojar of the Filipino Nurses United said nurses are already attending to 30 to as many as 60 patients per shift. This is a far cry from the ideal 1:12 ratio for ward patients and 1:1 for patients in intensive care.

MANILA – Buckets, not grains of sweat.

This is how nurse Pauline Budy described a day of being on duty for San Lazaro Hospital, the country’s special medical facility for infectious diseases. Like other health workers, she wears personal protective equipment for about eight to 12 hours under a very humid day.

Just yesterday, Budy was attending to a suspected COVID-19 patient in their triage area. With their elevator not functioning and a stretcher barely working, Budy and several nurse aids half carried the patient towards their COVID-19-dedicated ward.

“I almost collapsed. There was no oxygen. I had to keep myself calm even if my vision was already turning to black,” she said during a Zoom conference this morning, April 27.

The Department of Health said there are 1,101 healthcare workers who have tested positive for COVID-19, of which 434 are doctors and 400 nurses.

Meanwhile, the Philippines ranked first in percentage as of April 24 as the top country to have the highest fatalities among health workers in relation to the total number of their positive COVID cases. Critics have long assailed the shortage of PPEs for health workers as the top reason for their vulnerability to the deadly virus.

“I just kept on praying,” Budy said as she removed her N-95 and face shield to breathe a bit before returning to her job.

While shortage of PPEs appear to be a global problem, another nurse at the San Lazaro Hospital Jaymee de Guzman said there is a need to provide “safe spaces” for health workers.

“We do not need to wear these PPEs all the time. We need safe spaces (in hospitals),” she said.

De Guzman said the DOH has yet to release a protocol on the use of the PPEs. According to the Filipino Nurses United, these PPEs were only delivered to public hospital nurses in April when health workers have been forced to “make do with their own resourcefulness and creativity” to protect themselves from the virus since February and March.

With shortages for both PPEs and health workers, nurses are forced to work for five to 14 days straight for eight to 12 hours per shift.

Maristela Abenojar of the Filipino Nurses United, a nationwide group of Filipino nurses, said in the Zoom conference that instead of blaming healths workers, the health department should instead evaluate and come up with protocols for nurses and health workers who are enduring the current work situation as they respond to the COVID-19 pandemic.

Without due time to eat, drink, or even take toilet breaks, Filipino Nurses United said their ranks are likely to “suffer from suffocation, exhaustion and dehydration because of extreme heat from the coveralls which compromises their breathing.”

Some, the group said, “have suffered vertigo, hypertension, fluid and electrolyte imbalance such as hypokalemia or low potassium levels due of severe perspiration.”

“Nurses are compromising their own health now,” she said.

While wearing PPEs, Abenojar said they are not allowed to eat or drink, adding that it drains them both of energy and oxygen.

Abenojar reitrated their call for the Philippine government to immediately fill up vacant plantilla positions in the health department as part of their campaign to conduct “mass hiring.”

COVID-19, she said, has exposed the underlying chronic understaffing in the health sector.

Even before the pandemic, Abenojar said nurses are already attending to 30 to as many as 60 patients per shift. This is a far cry from the ideal 1:12 ratio for ward patients and 1:1 for patients in intensive care.

The chronic understaffing in government hospitals, she added, has been heightened with many of their fellow nurses who have either afflicted the virus or are on quarantine.

Abenojar said they are calling for the hiring of at least 42,000 nurses, one per barangay, who can help in education drive, contact tracing, and in assisting residents who need isolation. At least 4,000, on the other hand, are needed to be hired in government hospitals.

The increase in health workers, she added, will lessen the work load of Filipino nurses and limit their exposure to both suspected and confirmed COVID-19 cases.

So far, the DOH has redeployed 639 nurses to hospitals treating COVID-19. The Department on Budget and Management has also approved the hiring of 15,757 health workers under a contract of service for a period of three months. This will not address the understaffing in government hospitals when COVID-19 finally tapers, Abenojar said.

In a statement, the Filipino Nurses United said precious lives should not be sacrificed and that the spread of virus may be slowed and even halted if “vital measures are implemented to improve the public health system and prevent its possible collapse in the face of this threat.”