We’ve been gunned down before: The danger Fil-Am activists face today 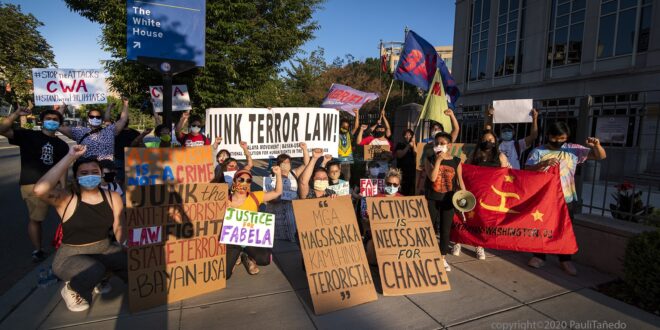 In 1981, Filipino-American union leaders Gene Viernes and Silme Domingo were gunned down in Seattle by state agents of the Philippine government under then-president Ferdinand Marcos. Viernes and Domingo were staunch critics of the Marcos dictatorship and organized solidarity relations between longshoremen in Seattle, Washington and the trade union movement in the Philippines.

Now, 40 years later, another dictatorship in the Philippines threatens Filipino-American activists once again.

Last September 2020, Lorraine Badoy, Undersecretary of the Presidential Communications Operations Office of the Philippines, shared a graphic on Facebook depicting me with the label “Terrorist Propagandist.” The image was reposted from a page called “For the Global Public,” which released similar images targeting fellow national leaders of Gabriela USA and Bayan USA, describing our organizations as “Front Organizations of the Philippines Communist Terrorist Group.”

The actual meaning of this “communist-terrorist” label remains elusive. However, it is clear how the Philippine government uses this term: not only as a tactic to smear and spread libel against activists, but as a warning signal, if not a precursor, to the killing of activists and political opponents. In this case, the attacks were focused on overseas Filipino activists of two organizations that advocate for the rights and welfare of Filipinos and for genuine democracy in the Philippines.

While the issue of red-tagging, or perhaps more accurately, “terror-tagging,” has long been an issue in the Philippines, state violence following cases of online terror-tagging has increased in the past year under the presidency of Rodrigo Duterte. Filipino human rights activists like Jory Porquia, Zara Alvarez, and Randy Echanis were all terror-tagged prior to their murders this year. In recent weeks, a group of Tumandok indigenous people, also previously terror-tagged for their activism against a dam project on their ancestral lands, were massacred while asleep in a joint operation of the Philippine military and police.

The recent passage of the so-called “Anti-Terror” Law in the Philippines this summer leaves activists even more vulnerable, including citizens of other countries outside the Philippines. Among the widely criticized provisions of the law is one that calls for the extradition and prosecution of overseas Filipinos and allies who participate in any actions deemed suspect in the eyes of the Philippine government. And if history has shown us anything, it is that the Philippine government views activism, even overseas, as a terrorist act.

After learning of my being terror-tagged, my Senator, Jeff Merkley, expressed concern and raised the issue of terror-tagging with Philippine Ambassador to the US Jose Romualdez. Not to my surprise, Ambassador Romualdez followed this meeting by writing his own op-ed defending red-tagging.

In his op-ed, after making absurd and fact-less claims indicating the role of overseas Filipinos in conducting illegal drug trades to support communist-terrorists, Romualdez suggested that US leftists are trying to drive a wedge in between the Philippines and the United States, seemingly referring to the the growing movement to suspend US military aid to the Philippine military and police until such time when the systematic killings in the Philippines and human rights atrocities end and perpetrators are held responsible.

This grassroots movement is gaining support from various US legislators like Senator Jeff Merkley; in July 2020, 55 representatives penned a letter to Romualdez expressing concerns over human rights violations in the Philippines and the Anti-Terror Law; later, in September 2020, Representative Susan Wild introduced the Philippine Human Rights Act, which takes up the people’s demand to suspend military aid to the Philippines until there is genuine accountability.

Those of us who stand at the helm of this movement are human rights activists, not terrorists; while Ambassador Romualdez may suggest we are driving a wedge into US-Philippine relations, we are in reality pushing for genuine friendship and people-to-people solidarity. If our countries are to have a relationship built on mutuality and trust, it is the right time for the United States to end any support for the current Duterte administration and leaders like Ambassador Romualdez who stand behind the mass repression and killings happening in the Philippines.

As Filipino-American activists, we’ve been gunned down before, but we’ve also faced and overcome the brutal repression under the Marcos regime. Now more than ever, we must rely on our history of struggle and resistance to tell the truth and expose the lies of the current regime’s desperate but untenable search for credibility. – Rappler.com