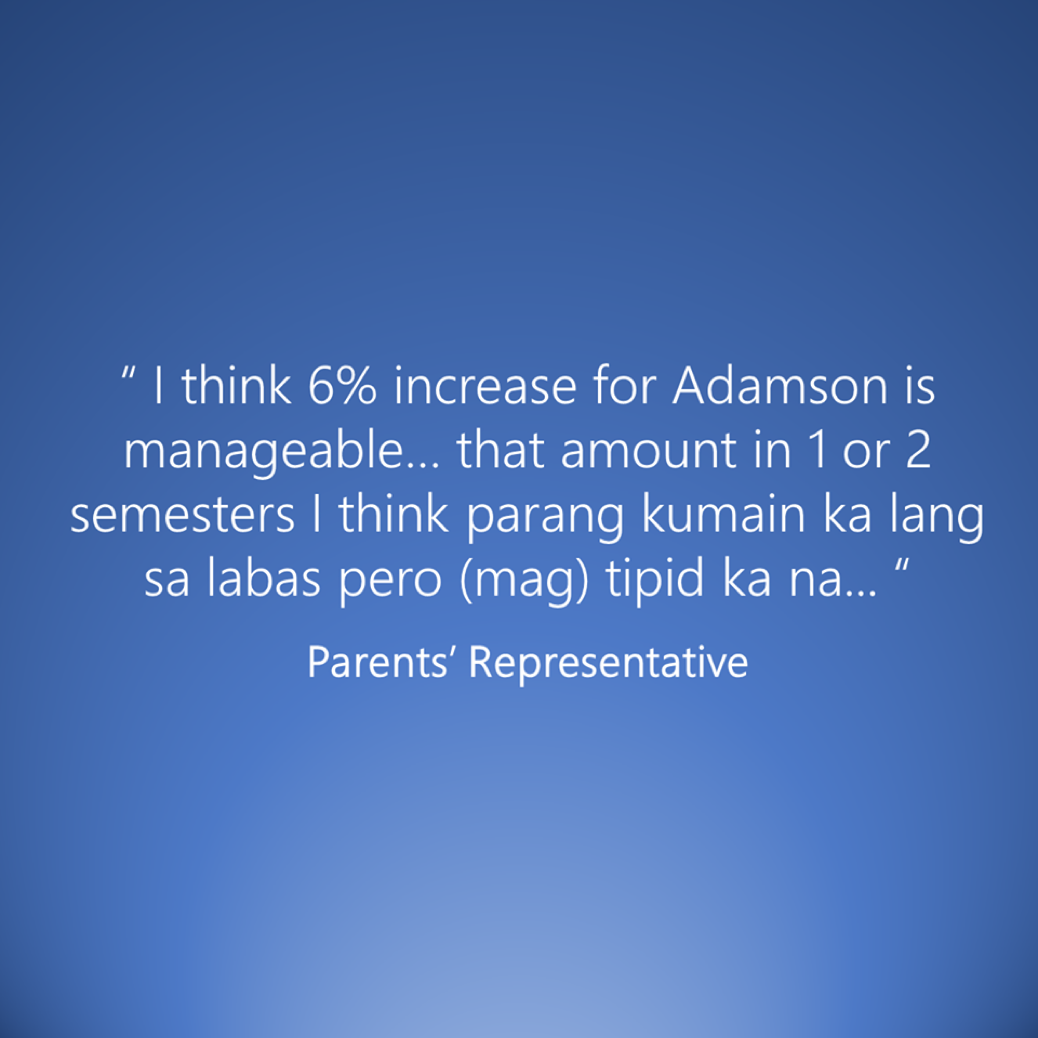 Students from Adamson University (AdU) launched a silent picket protest in front of the facade of the University on Wednesday, February 28, 2018, to protest against the impending 6% tuition and miscellaneous fee increase for the incoming school year 2018-2019.

The mobilization was done as a response to the recent approval of the position paper of the AdU administration proposing the increase in a consultation launched on Wednesday, February 21, 2018.

In an interview with Manila Today, Chairman for Grievances and Concerns Kristine Vernadette Barcelona of the Adamson University Student Government (AUSG) recalled what had transpired prior to the consultation meeting set by the Office of the President of the University. 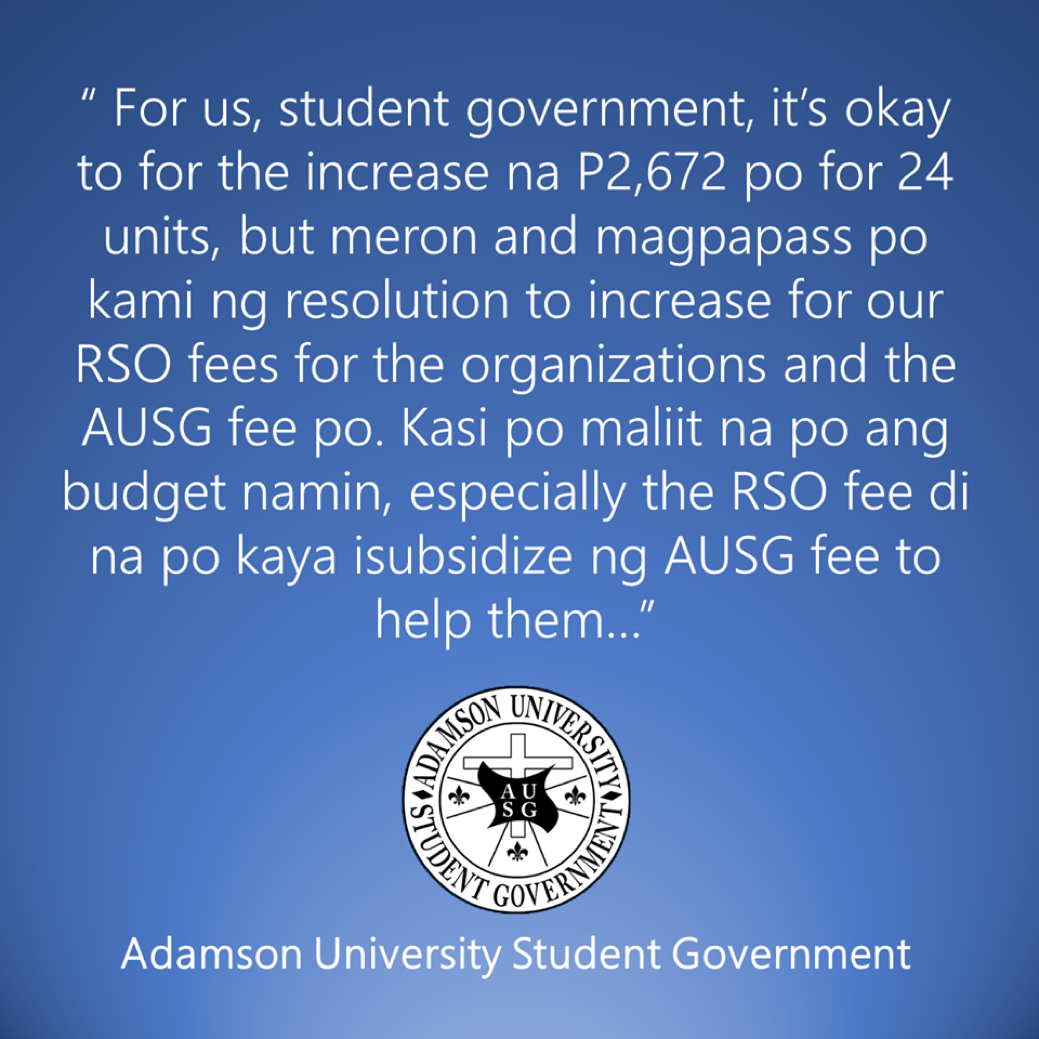 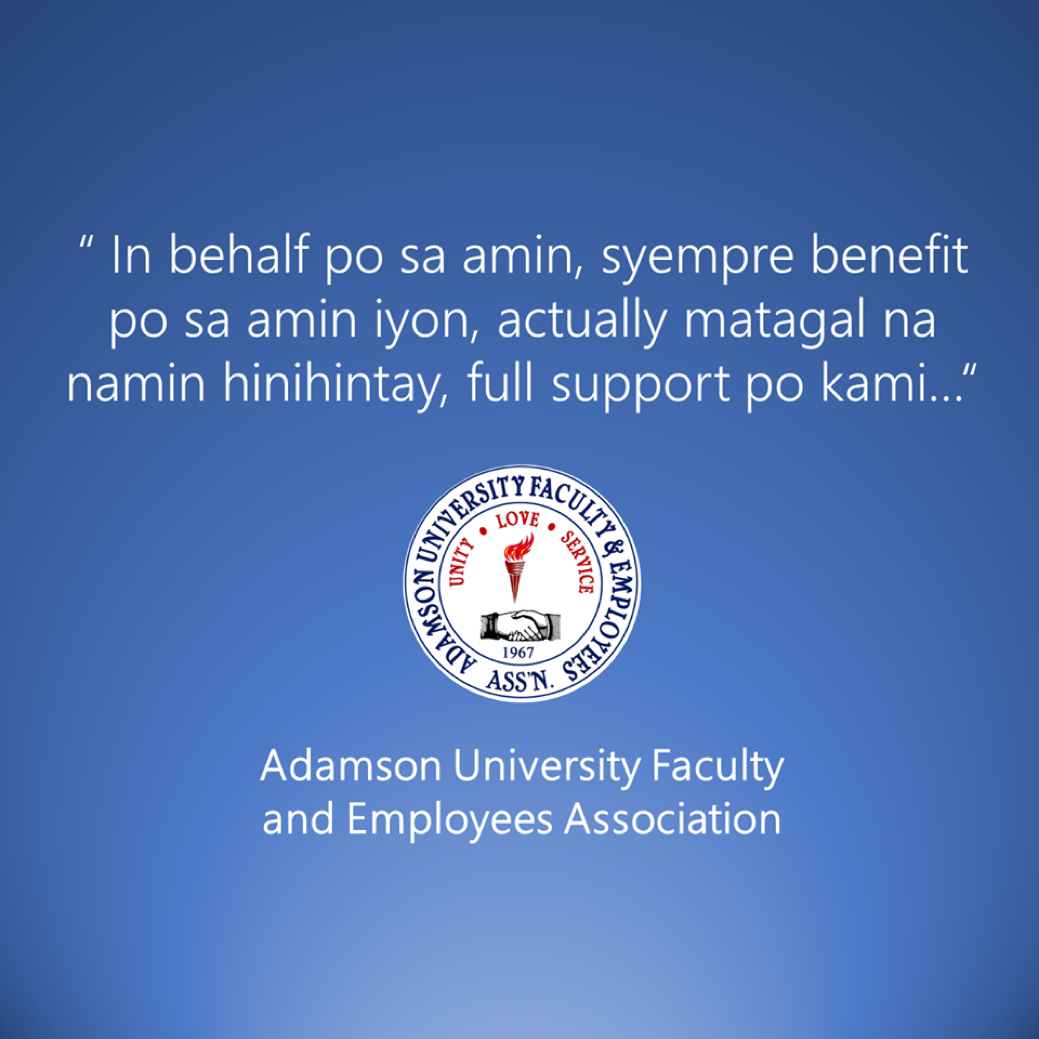 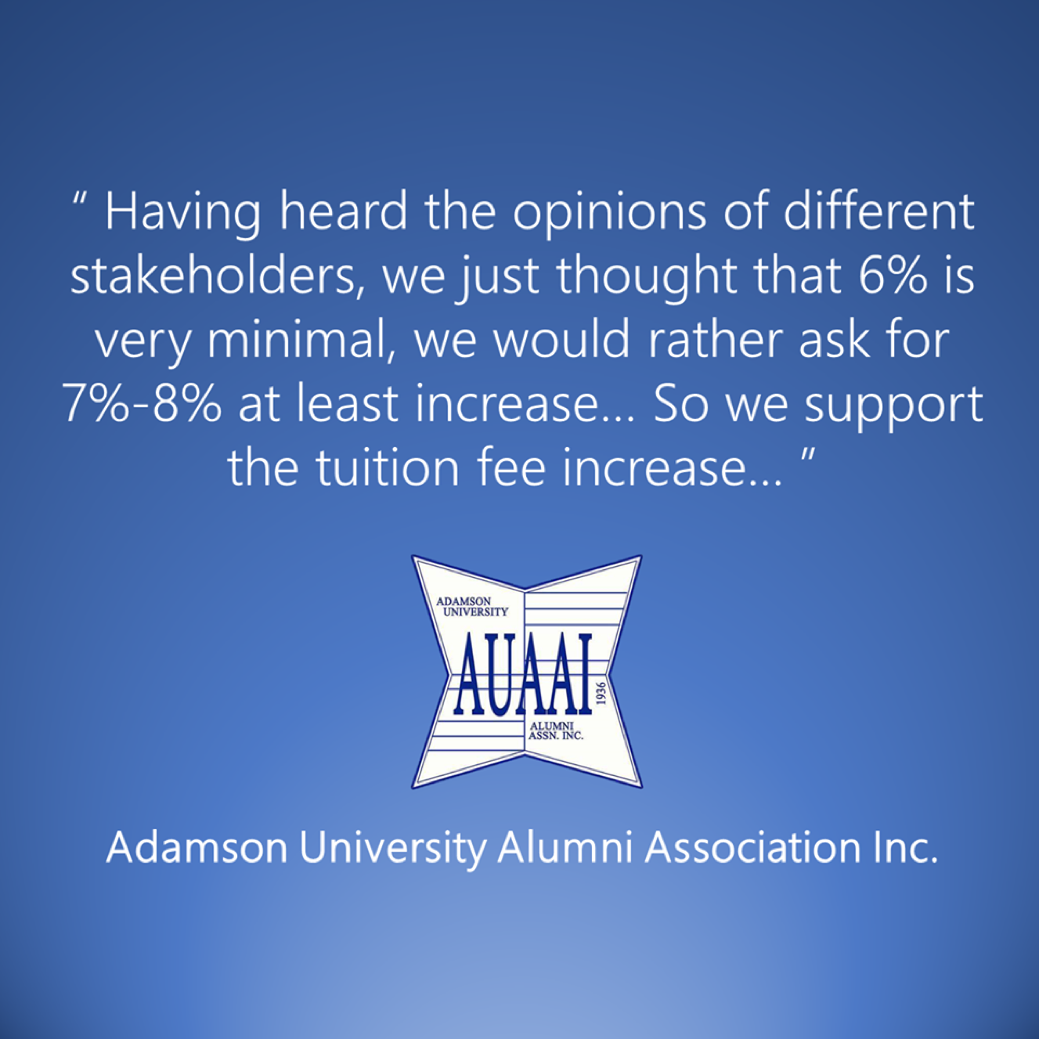 Sound bites released from the consultation meeting last February 21, 2018. The representatives in the meeting were met with criticisms from the AdU Community. Photos courtesy of AdU Chronicle.

(“They gave us a notice last February 2, but what it only entails is consultation. However, what happened [on the actual consultation] was we were merely informed. As if the stand of the students bear no meaning; [the increase] is still confirmed.”)

Janella Beverly Hodreal, another council member from the AUSG, reflected that they thought they would be asked about their thoughts about the proposal and the rationale behind. However on the actual meeting, they were only informed about the proceeds of the fee increase—with the administration providing a partial breakdown of where the fund will go.

(“Prior to the notice, what was only presented was an invitation letter. There are no supporting documents attached. So we thought that the matter would be discussed there, which is why we didn’t raise an inquiry. We were also shocked on the actual consultation itself.”)

According to the AUSG, the proposed tuition fee increase will merit an additional Php 80.00 per unit, with partial breakdowns on the funds received geared for increases in the allotment for insurance fee, a working fund for the new 9-storey building for the College of Engineering, as well as raises in the salary for the employees and faculty members of the University. The fund generated from the increase will also proceed to a new equipment required by the Department of Public Works and Highways (DPWH) that detects earthquakes, as recommended by the Commision on Higher Education (CHED), in order for the University to meet its requirements to maintain its Autonomous status.

News about the increase brought about strong condemnation from the students and parents from the Adamson community.

Bigger protests against TOSFI to come

(“The 6% tuition fee increase did not go through the right process or consultation within the Adamsonians. It was just laid out, with only CHED’s approval missing. The other day, the administration had a meeting with the Student Government but it was only a farce because there’s already a decision.) 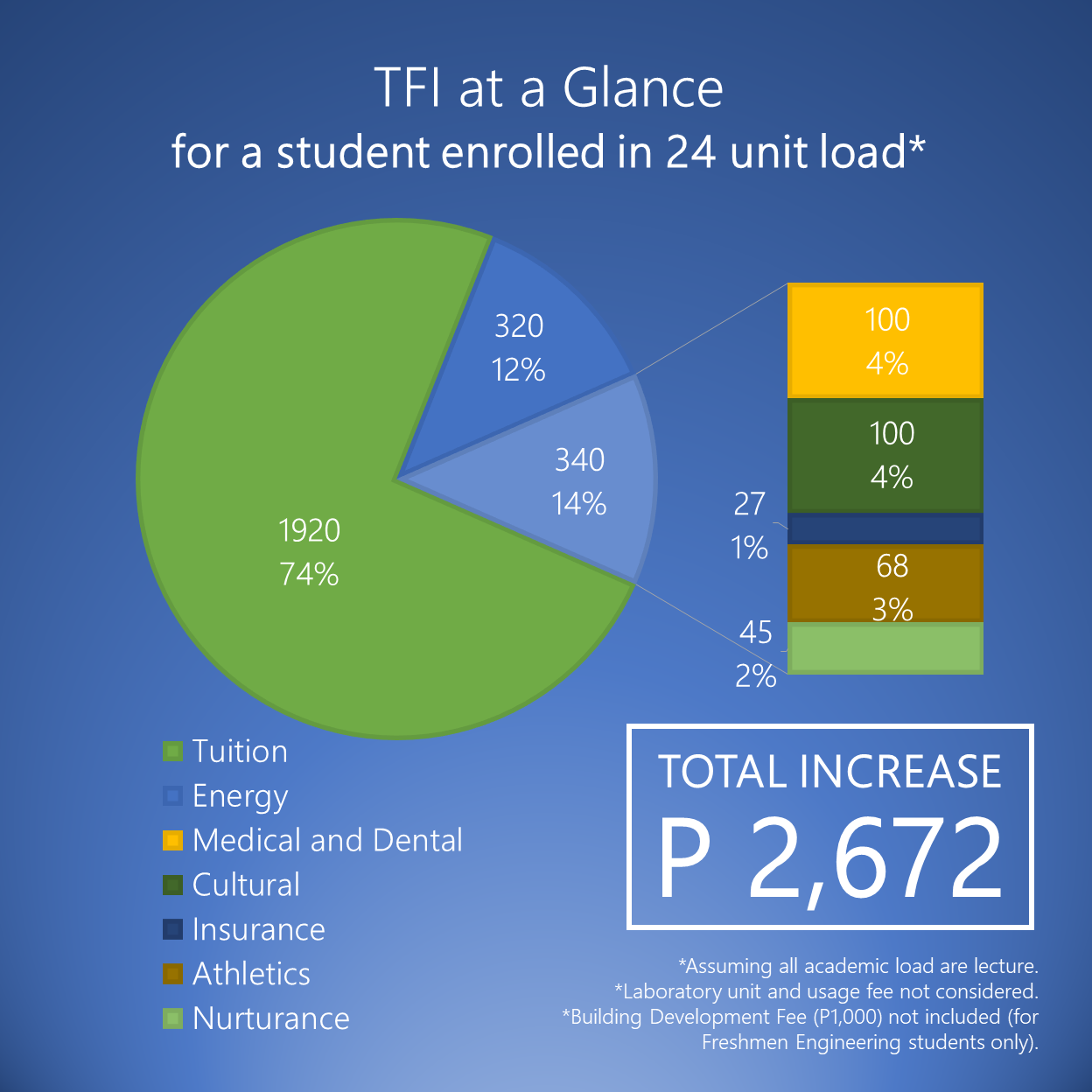 Bustamante expounded the burden that the increase will bring, as students from the Adamson community are mostly hailing from middle-class families.

(“We are aware that Adamson is a school for the poor. Given that context, we are also aware that the students who are studying here are not that affluent. The parents struggle to provide the tuition of the students. They already have a heavy burden, and this 6% increase will only exacerbate that.”)

Bustamante was part of the group that organized the silent protest. Prior to the protest on Wednesday, online campaigns calling out for a Black Wednesday shirt protest and black ribbon tying was spearheaded by the group, coinciding with the AUSG’s call for a same shirt protest on the same day. AUSG’s efforts to address the issue focused on launching a petition-signing initiative, freedom walls, and a scheduled dialogue with the administration sometime in March.

On the other hand, Bustamante and his group resolves that there would be bigger mobilizations to come in line with the mounting of a bigger campaign against the tuition fee increase as well as the scrapping of the No Permit No Exam (NPNE) policy of the University. The NPNE policy entails a requirement for the students of the University to produce an approved promissory note before taking exams, which caused students to not take the exam at all, given its bureaucratic process.

(“This campaign is done to open the eyes of the Adamsonians in order to agitate them and in order to prepare Adamson for the launching of a bigger campaign against tuition fee increase and removal of the No Permit No Exam policy.”)

Meanwhile, Sharo Banzuela Jr., the deputy secretary-general of the National Union of Students of the Philippines – Metro Manila (NUSP – MM), expressed the support and commitment of the Union to elevate the initiative of the AdU students.

In a statement, Banzuela manifested that the recent move of the administration is a direct attack to the students of the University, elucidating that it only heightens the rampant commercialization prevalent among private Higher Educational Institutions (HEIs). Banzuela also blasted CHED’s noncomittal actions regarding the influx of increase orchestrated by HEIs.

“While we continue to struggle against the policies perpetrated by private school administrators, we cannot leave out CHED’s lack of commitment when it comes to these policies, especially with the issue on tuition and other school fees. CHED and these institutions’ teamwork in carrying out the inhumane policies at the expense of the students is a glaring manifestation of exacerbating commercialization of education and its subsequent motive to paint education as a privilege instead of a right that should be attained by the people,” Banzuela said.

“The youth must continue to be vigilant and wage a greater campaign against these initiatives which further draws them away from their right. We must continue to struggle against this type of education and fight for one that is free, accessible, liberating, and emancipatory. Only then shall the youth enjoy education for what it really is: a fundamental right received at no cost,” he added.