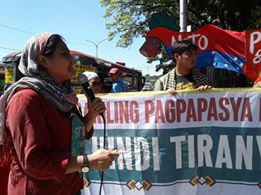 Environmental activist group Kalikasan People’s Network for the Environment and indigenous people’s alliance Sandugo gathered at the House of Representatives earlier to protest the 23-year-old Mining Act and the proposed Charter change (Cha-cha) of the Duterte administration.

The groups argued that the act has policy deficiencies, part of the reason why former environment secretary Gina Lopez ordered the closure, suspension, or agreement cancellation of mining operations in the country.

They added that the Mining Act, enacted in 1995, allows foreign control over big mines and displacement of indigenous communities. According to them, the law could give a preview of how transnational corporations could steal 79% of the generated mineral wealth since 1998 while legally clearing out forests, diverting rivers and springs.

“The repeal of the Mining Act, which was officially 23 years in place last March 3, 2018, should have been one of the top legislative priorities of Congress instead of Cha-cha,” said Kalikasan-PNE national coordinator Leon Dulce.

Cha-cha to sell out national patrimony

Groups also condemn the proposed constitutional amendments of President Rodrigo Duterte that promotes the plunder of natural resources and would “put the Mining Act on steroids”.

Cha-cha opens up minerals and other natural resources to full 100-percent foreign ownership. It also unfetters mining and other extractive corporations to land-grab critical ecosystems and protected landscapes,” Dulce added.

Sandugo also decried Duterte’s rhetoric of federalism as the solution to social inequities and unrest.

“Duterte’s chacha is nothing but a total sell-out to our national patrimony and sovereignty as a nation and for us, national minorities – both the Moro and indigenous peoples – the diminution of our collective right to self-determination,” Sandugo co-chairperson Jerome Succor Aba said.

“This allows the state to fully control the territories and sacrifice us in the ‘altar of national interest’. This will warranty more incursions into the lands by big foreign and local business interests. It will remove the right of the Moro and Cordillera peoples to autonomy as an expression of self-determination enshrined in the current constitution,” Aba added.

Kalikasan-PNE and Sandugo stated that Duterte’s Cha-cha does not address the roots of poverty and social unrest and that Duterte is only using Cha-cha as a tool to entice his political allies with an extended term and a federal system where they can consolidate their political and economic power.